Working from Home’s Impact on Electricity Use in the Pandemic 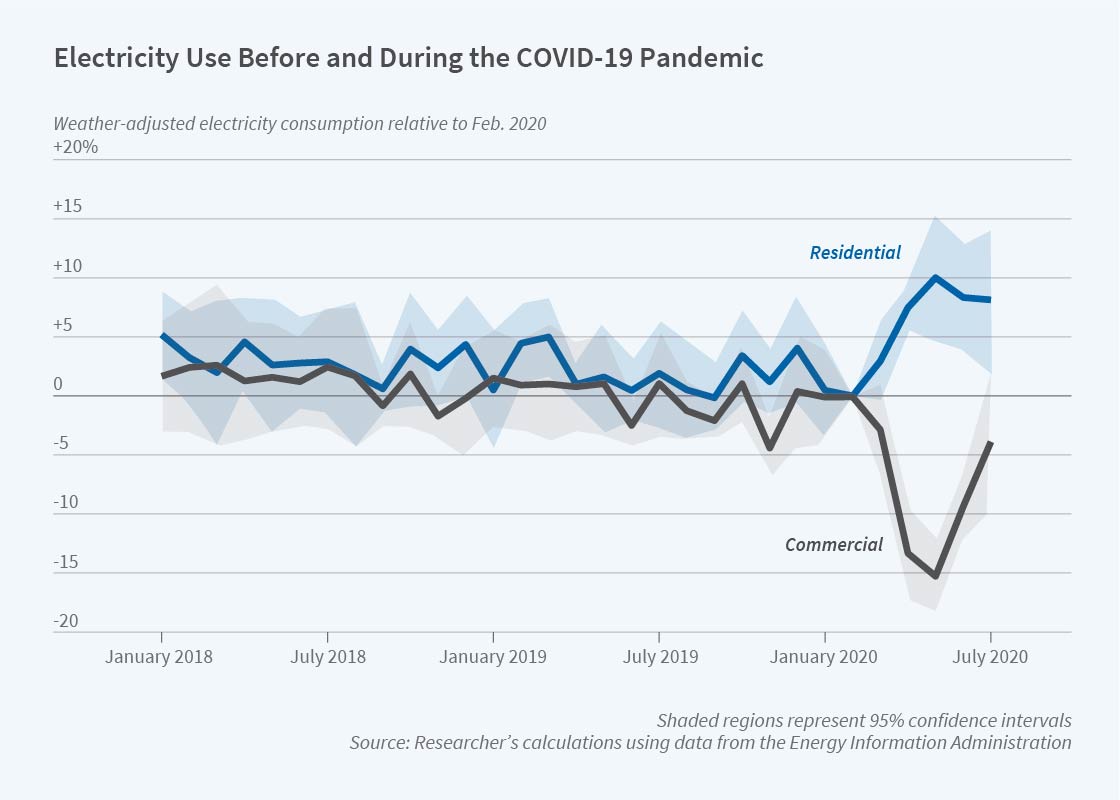 Americans spent $6 billion more on at-home power consumption from April to July 2020 than during normal times, nearly offsetting a decline in business and industrial demand.

With Zoom sessions, greater use of heating and cooling systems, and lamps and printers running all day, Americans working from home, combined with an increase in the number of unemployed workers who are home because they have lost jobs at shuttered businesses, have driven a surge in residential electricity consumption since the onset of the COVID-19 pandemic in the United States.

Compared with the same months from 2016–19 and adjusted for weather differences, the second quarter of 2020 saw a 10 percent increase in residential electricity usage, a 12 percent drop in commercial usage, and a 14 percent drop in industrial usage, according to Powering Work from Home (NBER Working Paper 27937) by Steve Cicala.

Based on weather-adjusted hourly usage data from Texas, the study documents stark changes in at-home electricity consumption patterns. Pre-pandemic, electricity use rose sharply early in the morning as people prepared for work, dropped off during the day, and peaked in the evening. During the pandemic, this pattern has largely disappeared: residential consumption rises later in the morning, and is 16 percent higher during work hours than it was before the pandemic struck.

The study uses weather-adjusted monthly data on electricity consumption nationwide to disentangle the impact of the enlarged home-based workforce from other factors that have pumped up residential usage. In the top 10 metropolitan areas, for example, the portion of the labor force that is working from home is estimated to be 10 percentage points above the national average. That differential corresponds to a 3 percent increase in residential consumption in those metro areas in the second quarter of 2020, compared with the same months from 2016–19. Residential consumption has increased nationwide, but the sharpest rises have been in New England, Illinois, and California. The smallest increases have been in Appalachia and the south-central states.

Traditionally, business consumption of electricity has been a signal of the economy’s direction. The 2008 economic crisis was accompanied by a 10 to 15 percent drop in industrial and commercial electricity use, but no significant change in residential usage. In contrast, the surge in residential use during the pandemic has nearly offset the decline in commercial and industrial consumption. Electricity use across all sectors declined just 3.5 percent in the second quarter of 2020, compared with the same period the year before.

From an environmental standpoint, working and studying from home comes with a cost, especially for those living in large suburban houses. These homes are not as energy efficient, on average, as schools and offices. This reduction in daytime energy efficiency is a partial counterbalance to the energy savings associated with reduced commuting.