Trends in Work and Disability Application among People with Mental Illnesses

Mental illness can involve cognitive dysfunction, including in the areas of attention, executive functioning, processing speed, and social cognition. These deficits, combined with the affective and motivational features of mental illness (such as depressive symptoms and reduced goal orientation), can diminish the labor market productivity of people with mental illnesses. The onset of certain mental illnesses in late adolescence and early adulthood can also disrupt education and early work experience, with life-long effects on productivity.

While the skill impairments associated with mental illness have always made it challenging to integrate people with severe mental illness into the workforce, the changing nature of work may be making this integration more challenging. Automation and technological advancement have reduced the demand for workers who perform routine cognitive and non-cognitive tasks. If people with mental illness are disproportionately employed in such jobs, it may become more difficult over time for them to find work and to gain the financial independence and therapeutic benefits that work can bring.

In Changing Labor Markets and Mental Illness: Impacts on Work and Disability (RDRC Working Paper 19-05), researchers Richard Frank, Sherry Glied, Keith Marple and Morgan Shields examine trends in labor force participation and Social Security Disability Insurance (SSDI) application among people with mental illnesses over the past two decades. The authors also explore how the composition of skills needed for the jobs held by people with mental illnesses differs from that of the general population.

The authors use data from the National Health Interview Survey, covering 650,000 people over a 20-year period. The level of mental illness - none, mild, moderate, or severe - is categorized using self-reports of the frequency of feeling hopeless, nervous, and so on in recent weeks, following the widely used Kessler Psychological Distress Scale (K6). Respondents' occupations are matched to the Bureau of Labor Statistics' O*NET data in order to measure job skill requirements. 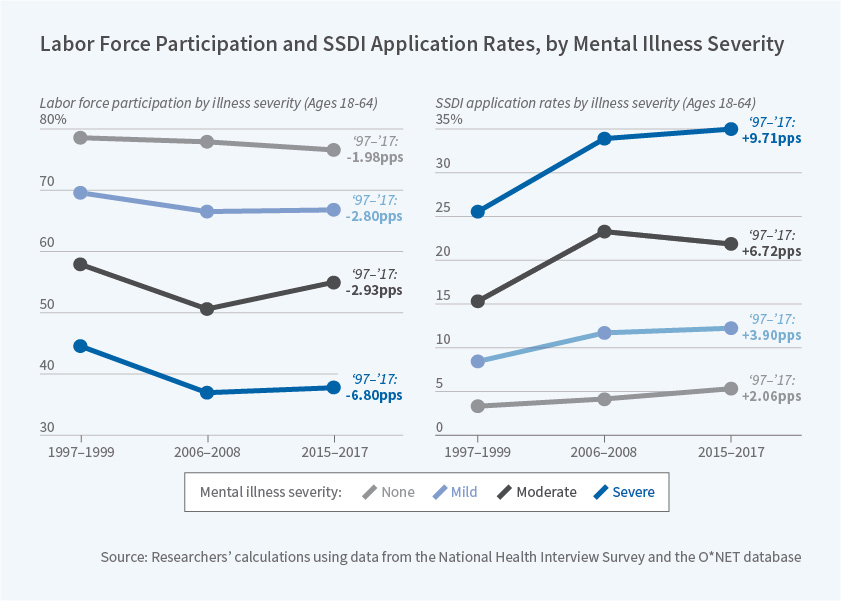 While SSDI application rates rise over time for all groups, they jump sharply — by 8 percentage points — between the initial and Great Recession period for those with moderate or severe illness. After this, rates decline for those with mild illness, while continuing to rise for the other groups.

Finally, the authors examine the jobs held by people with mental illness. They report that a disproportionate share of people with mental illness are engaged in office work, sales, and food preparation, jobs that tend to be relatively low wage-low skill occupations. They also find that people with moderate to severe psychological distress are under-represented in occupations that involve non-routine cognitive analytical and non-routine cognitive interpersonal skills, and that this under-representation has been growing over time.