Nearly one in seven US workers is a state or local government employee. These employees are eligible for retirement benefits through about 300 state administered and 6,000 locally administered pension plans, most of which are defined benefit plans.

Many state and local pension plans face a funding gap. Across all plans, the ratio of plan assets to plan liabilities was 72 percent in 2019. Many public sector retirement plans are prohibited by their state constitutions from changing the pension benefit formula for employees after the point of hire. However, plans generally do have discretion over annual cost-of-living adjustments (COLAs), which affect both current and future retirees. Changes in the COLA can dramatically alter the lifetime value of pension benefits. 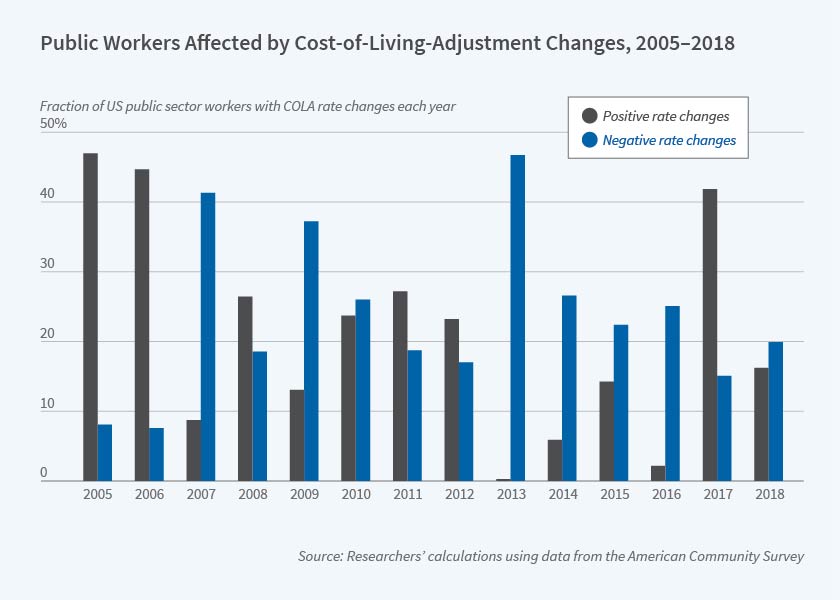 The authors collect new data on COLAs for public sector retirement plans nationwide. The data collection effort involved searching legislative records and pension plan websites and documents, as well as contacting plan administrators. They obtain complete data on 49 plans in 30 states between 2005 and 2018. Next, the authors match plans to state and local workers in the American Community Survey (ACS), a large nationally representative survey, using workers’ location and occupation. This process yields information on COLAs for 52 percent of public employees in the ACS.

The authors find that COLA changes are quite prevalent for public sector workers between 2005 and 2018. In each year, an average of 45 percent of workers experience a change in their COLA. The mix of positive and negative COLA changes varies quite a bit — in 2017, for example, 42 percent of workers have an increase in the COLA and 15 percent have a decrease, while in 2013, less than 1 percent experience an increase in the COLA while 47 percent experience a decrease. In general, there are more positive changes prior to the Great Recession and more negative changes in more recent years.

To begin to explore these implications, the authors conduct an analysis using stylized examples of sample workers. For someone who starts a government job at age 22 and is eligible for pension benefits after 30 years, moving from a 3 percent annual COLA to no COLA would reduce the present value of lifetime pension benefits by 36 percent. Applying estimates from the previous literature of how workers adjust their retirement in response to a change in pension wealth suggests that this COLA change would translate to a delay in retirement of 4.7 months.

In concluding, the authors note, “the sheer number of workers affected by these [COLA] changes — 60 million over the 14 years covered by our database — suggests that these changes, which have not been studied on a broad scale, could have significant changes on retirement and Social Security.”