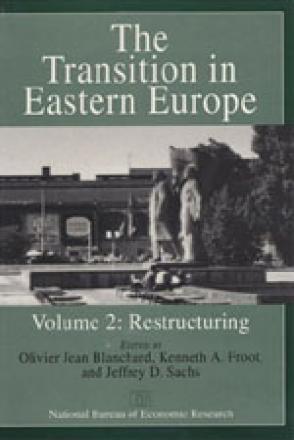 When communism fell in 1989, the question for most Eastern European countries was not whether to go to a market economy, but how to get there. Several years later, the difficult process of privatization and restructuring continued in the countries of the region. The Transition in Eastern Europe, Volumes 1 and 2 is an analysis of the experiences of various countries making the transition to market economies and examines the most important challenges still in store.
Volume 1, Country Studies, gives an in-depth, country-by-country analysis of various reform experiences, including historical backgrounds and discussions of policies and results to date. The countries analyzed are Poland, Czechoslovakia, Hungary, eastern Germany, Slovenia, and Russia. Written by leading economists, some of whom helped shape local and national reforms, this volume identifies common progress, common difficulties, and alternatives to resolving the problems of economic transition.
Volume 2, Restructuring, focuses on specific issues of transition, including how to design labor market institutions, privatization, new fiscal structures, and bankruptcy laws; how to reorganize foreign trade; and how to promote foreign direct investment. The articles, written by experts in the field, will be of direct help to those involved in the transition process.
These volumes provide a standard reference on economic transition in the region for policymakers in Eastern Europe and in western countries, for international agencies concerned with the transition process, and for anyone interested in learning about the dramatic changes in Eastern Europe.