The Defining Moment: The Great Depression and the American Economy in the Twentieth Century 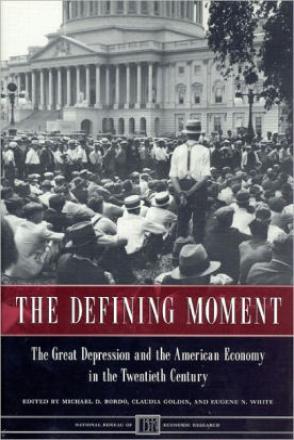 In contemporary American political discourse, issues related to the scope, authority, and the cost of the federal government are perennially at the center of discussion. Any historical analysis of this topic points directly to the Great Depression, the "moment" to which most historians and economists connect the origins of the fiscal, monetary, and social policies that have characterized American government in the second half of the twentieth century. In the most comprehensive collection of essays available on these topics, The Defining Moment poses the question directly: to what extent, if any, was the Depression a watershed period in the history of the American economy? This volume organizes twelve scholars’ responses into four categories: fiscal and monetary policies, the economic expansion of government, the innovation and extension of social programs, and the changing international economy. The central focus across the chapters is the well-known alternations to national government during the 1930s. The Defining Moment attempts to evaluate the significance of the past half-century to the American economy, while not omitting reference to the 1930s.
The essays consider whether New Deal-style legislation continues to operate today as originally envisioned, whether it altered government and the economy as substantially as did policies inaugurated during World War II, the 1950s, and the 1960s, and whether the legislation had important precedents before the Depression, specifically during World War I. Some chapters find that, surprisingly, in certain areas such as labor organization, the 1930s responses to the Depression contributed less to lasting change in the economy than a traditional view of the time would suggest. On the whole, however, these essays offer testimony to the Depression’s legacy as a "defining moment." The large role of today’s government and its methods of intervention—from the pursuit of a more active monetary policy to the maintenance and extension of a wide range of insurance for labor and business—derive from the crisis years of the 1930s.