The Decline of Latin American Economies: Growth, Institutions, and Crises 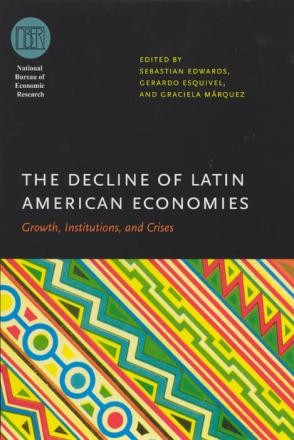 Latin America’s economic performance is mediocre at best, despite abundant natural resources and flourishing neighbors to the north. The perplexing question of how some of the wealthiest nations in the world in the nineteenth century are now the most crisis-prone has long puzzled economists and historians. The Decline of Latin American Economies examines the reality behind the struggling economies of Argentina, Chile, and Mexico.
A distinguished panel of experts argues here that slow growth, rampant protectionism, and rising inflation plagued Latin America for years, where corrupt institutions and political unrest undermined the financial outlook of already besieged economies. Tracing Latin America’s growth and decline through two centuries, this volume illustrates how a once-prosperous continent now lags behind. Of interest to scholars and policymakers alike, it offers new insight into the relationship between political systems and economic development.