Excess Mortality during the COVID-19 Pandemic 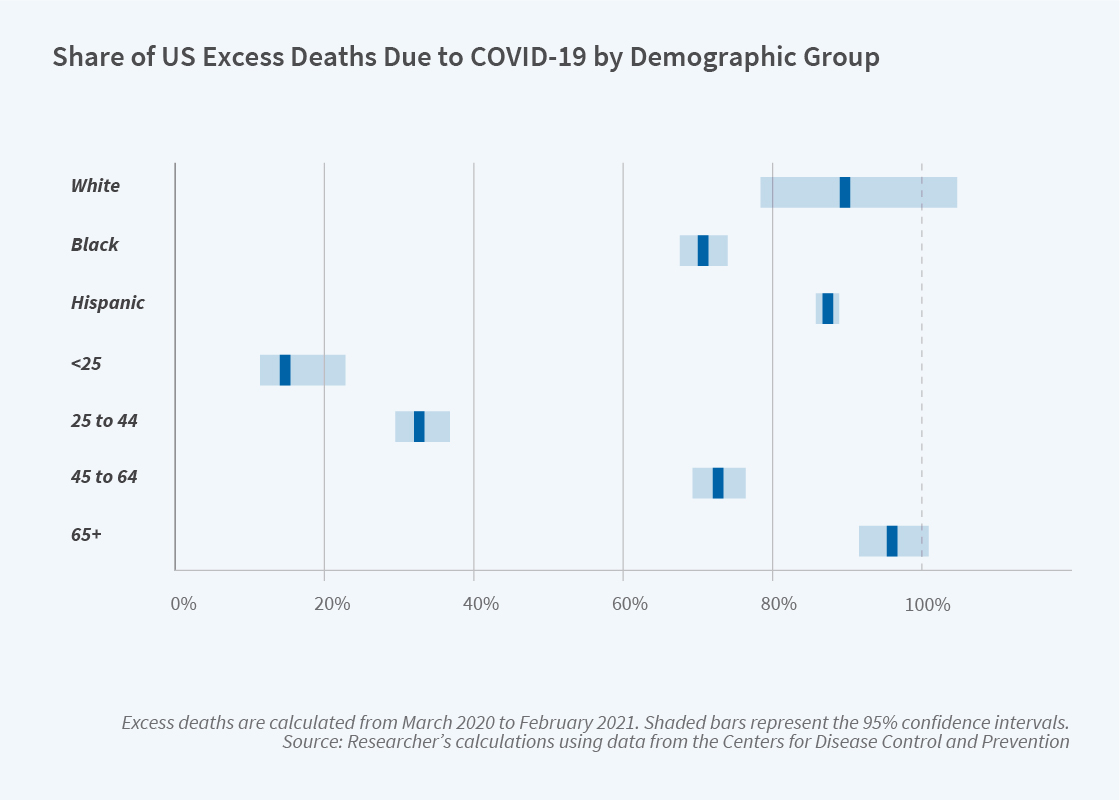 An estimated 646,514 excess deaths occurred in the United States during the first 12 months of the COVID-19 pandemic. This was a 22 percent increase over the number of deaths that would have been expected if the pandemic had not occurred. Among these excess fatalities, an estimated 83 percent were directly attributable to COVID-19, while others were from causes ranging from strokes to homicides.

These new estimates of the mortality consequences of the pandemic are reported in Excess Deaths in the United States during the First Year of COVID-19 (NBER Working Paper 29503), by Christopher J. Ruhm. Excess deaths are calculated as the difference between actual deaths — which are reported by the Centers for Disease Control and Prevention — and the number of deaths that would have occurred in the absence of the pandemic — which must be estimated. Ruhm uses 2009–19 Vital Statistics data to calculate the number of expected deaths. He cautions that underestimating expected deaths leads to overstated excess mortality and an understated share of deaths that are directly attributable to COVID-19. He creates separate estimates for selected causes of death and demographic groups in order to examine heterogeneity in excess deaths.

Though excess deaths during the pandemic were primarily due to COVID-19, they also resulted from other causes. For example, actual deaths due to strokes during the pandemic were 7 percent higher than expected, and actual deaths from diabetes were 16 percent higher. Deaths due to external causes were particularly elevated relative to their expected levels, with a 16 percent increase in accident fatalities, a 29 percent increase in fatal drug overdoses, and a 27 percent increase in homicides. Interestingly, deaths due to suicide, influenza, pneumonia, and lower respiratory disease were all lower than predicted. There was no observable impact on cancer mortality.

The study highlights substantial variation in excess mortality across some demographic groups. Hispanics experienced an especially large increase in mortality, relative to expectations, of 51 percent, and non-Hispanic Blacks experienced a 31 percent increase. By comparison, actual deaths of non-Hispanic Whites were 17 percent above expectations. Senior citizens had the largest number of excess deaths but, relative to the number of expected deaths, the 21 percent increase for senior citizens was similar to the increase for adults between the ages of 25 and 64. The under-25 age group had a notably lower rate of excess deaths: 12 percent above expectations.

Taken together, these new estimates convey the magnitude and breadth of the pandemic’s impacts on mortality in the United States during its first year. They also demonstrate that the pandemic’s health effects have varied substantially across demographic groups, in both the magnitude of excess fatality rates and in the underlying reasons for those fatalities.

Behavioral Responses to Supply-Side Drug Policy During the Opioid Epidemic