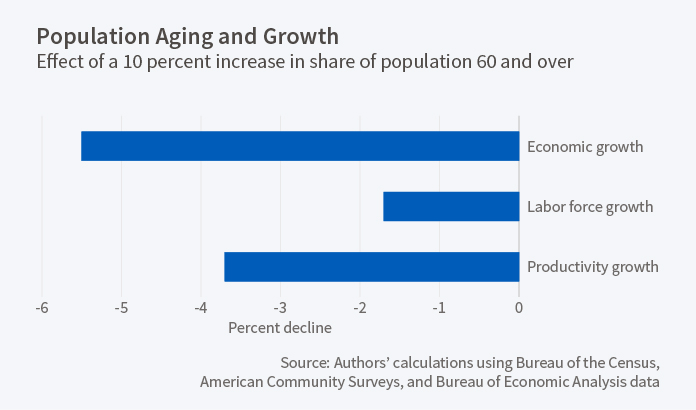 As the U.S. population becomes older than ever before, how will this affect our standard of living? The share of the U.S. population age 60 and above is expected to rise by 40 percent between 2010 and 2050. This historic shift may affect economic growth by altering the size and productivity of the labor force.

While a number of studies have forecast the potential effects of aging on economic growth, there are few empirical studies based on an economy's actual experience with aging. Researchers Nicole Maestas, Kathleen Mullen, and David Powell attempt to fill this void in their new study "The Effect of Population Aging on Economic Growth, the Labor Force, and Productivity"(NBER Working Paper No. 22452).

Population aging has been underway for some time in the U.S., but the rate of aging has varied substantially across states. For example, six states saw the share of the population age 60 and above rise by over 30 percent between 1980 and 2010, a rate of growth similar to that expected for the U.S. as a whole from 2010 to 2040, while three states saw their older populations shrink during this period.

The authors leverage these differences to explore the effect of aging on economic growth. One concern with using the actual rate of population aging in each state is that it could be affected by economic growth if younger people tend to move to fast-growing states. To surmount this issue, the authors construct a measure of population aging based on the state's age structure ten years earlier, capturing the part of aging that is pre-determined by historical demographic patterns.

The study uses population and labor force data from the decennial census and economic output from the Bureau of Economic Analysis for the period 1980 to 2010. The authors construct ten-year rates of growth in population, labor force, and productivity by state.

The authors find that a 10 percent increase in the share of the population that is age 60 and above decreases growth in GDP per capita by 5.5 percent. GDP per capita can be decomposed into its component parts, GDP per worker and the employment-population ratio. The authors estimate that the former declines by 3.7 percent and the latter by 1.7 percent in response to a 10 percent increase in the older population. Thus, two-thirds of the slowdown in economic growth resulting from population aging is due to slower productivity growth, while one-third is due to slower labor force growth.

The study's findings can be used to estimate the contribution of population aging to economic growth. From 1980 to 2010, the share of the population age 60 and over rose by 17 percent. This implies that GDP per capita was 9.2 percent lower than it would have been in the absence of population aging, corresponding to a 0.3 percentage point decrease in the annual rate of growth, during a period when this rate averaged 1.8 percentage point. Projecting forward, the share of the older population is due to rise even more rapidly, by 21 percent from 2010 to 2020 and by 11 percent from 2020 to 2030. This suggests that aging will lower the growth rate by 1.2 percent per year this decade and 0.6 percent next decade.

The authors caution that their study design does not account for national effects that might occur when aging happens in many states at once, which could either mitigate or exacerbate the effects of population aging. They conclude, "our findings foretell a further slowdown in productivity growth reflecting not only compositional differences in the workforce but also real productivity losses among individuals across the age spectrum. At the same time, greater investment in human capital development through the life cycle coupled with policies and practices that encourage employment at older ages could prevent these losses to some degree."

The authors acknowledge funding from the Alfred P. Sloan Foundation Working Longer program. At least one coauthor has disclosed a financial relationship of potential relevance for this research. Further information is available at http://www.nber.org/papers/w22452.ack

The Effect of Population Aging on Economic Growth, the Labor Force and Productivity