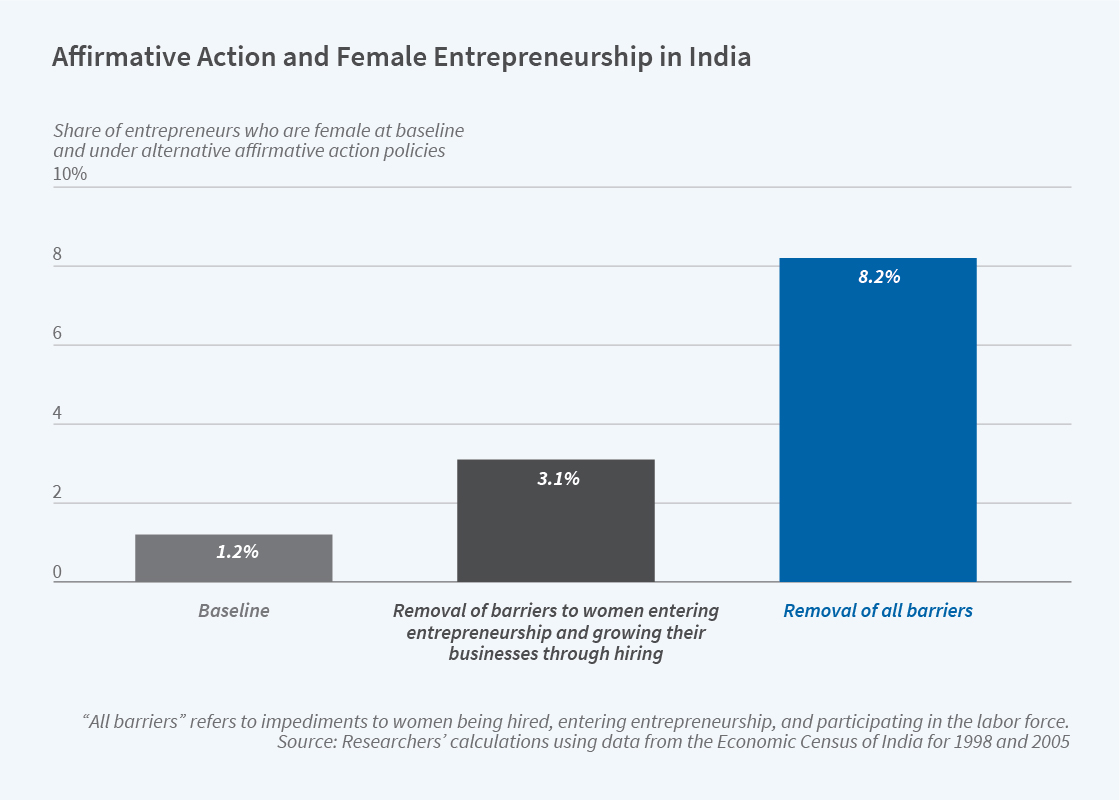 In Aggregate Implications of Barriers to Female Entrepreneurship (NBER Working Paper 28486), Gaurav Chiplunkar and Pinelopi K. Goldberg estimate the impediments faced by women who seek jobs or launch businesses in India, and then develop and calibrate a model to gauge the consequences of dismantling them.

The researchers note that female labor force participation has remained stagnant in the country for the past three decades. They also observe that female business owners tend to hire more women than men, and therefore conclude that advancing female entrepreneurship would have broad effects in promoting women’s entry into the workforce.

If all costs of women’s labor force participation and entrepreneurship were lowered to the same level as that for men, the fraction of women entrepreneurs would rise from 1.2 to 8.2 percent.

Women face several cost disadvantages, some of which arise from social and cultural norms that discourage work outside the home, when entering the workforce and launching or expanding businesses. The study estimates that labor participation costs for women are 2.5 times higher than for men. Moreover, female entrepreneurs often face higher interest rates on business loans than their male counterparts, as well as hiring costs that are 10 to 20 percent greater. The only metric in which female entrepreneurs hold an edge is in employing women, perhaps a result of men preferring to have their wives work for women rather than for men.

The researchers modeled several scenarios in which various costs of labor force participation for men and women were equalized. They concluded that if all labor supply constraints faced by women were removed, female labor participation would more than double, to 60 percent, and the fraction of women who are entrepreneurs would jump sevenfold, from 1.2 percent to 8.2 percent. Women workers would receive higher wages and women owners, higher profits. Aggregate productivity would rise by 1.5 percent as the influx of female-owned businesses forced out marginally productive male-owned firms.

The researchers conclude that “affirmative action policies that can effectively target both the constraints to labor force participation as well as barriers to entrepreneurship are highly effective in boosting productivity and welfare, both for women and the economy as a whole.”