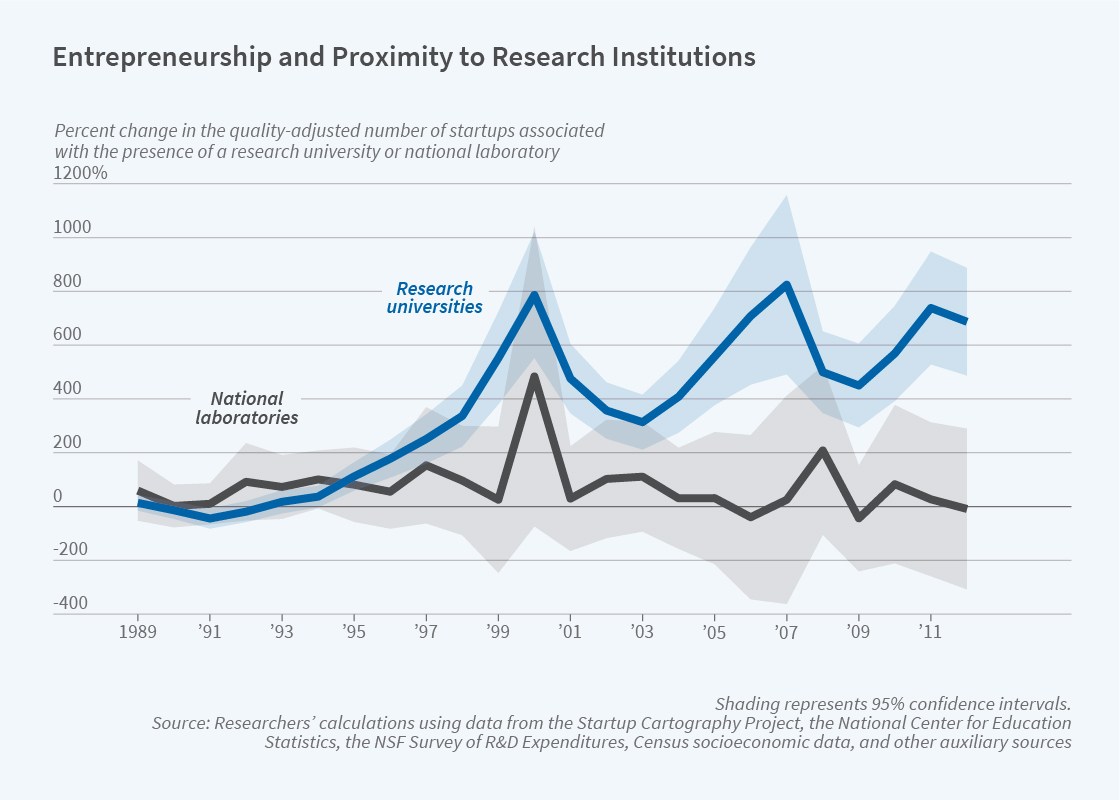 Many cities and states search for policy levers that could enable them to develop a startup culture. In "More than an Ivory Tower: The Impact of Research Institutions on the Quantity and Quality of Entrepreneurship" (NBER Working Paper 28846), Valentina Tartari and Scott Stern conclude that research universities, particularly those in urban areas and near high-income zip codes, provide the most fecund ground for high-quality local entrepreneurship.

The researchers analyze information from the Startup Cartography Project, which provides zip-code-level measures of both the quantity and quality of entrepreneurship across 34 states for the period 1988–2012. Quantity is measured by the count of new business registrations. Quality is measured on the basis of a predictive model that links observable features of startups at the time of founding (such as how they incorporate and whether they pursue formal intellectual property protections) to their potential for growth over time. For each zip code, the researchers also note the presence or absence of nearby research institutions, such as national laboratories and research universities.

Areas near a national laboratory or a research university exhibit more startup activity, but increased federal research support only spurs entrepreneurship near universities.

There is a strong correlation between the presence of a federally funded research institution and the quantity of local entrepreneurship. The number of startups is more than twice as great in the presence of a national laboratory and more than three times higher in zip codes within a five-mile radius of a research university. Startup quality is also higher near research institutions.  However, the researchers point out that these correlations are difficult to interpret because research institutions may thrive in areas with a more entrepreneurial culture: causation could run from the community to the institution, not vice versa.

The researchers find that, on average, when a university succeeds in raising about $1.5 million of additional federal research funding, there is one more successful startup in the local economy.  Success is defined as reaching an initial public offering or selling the firm for at least $10 million. This implies a high return for the local community to increased federal funding.

While both universities and national labs engage in federally funded research, university research activities seem to be more closely linked to spillovers to local entrepreneurial ecosystems.  The researchers conclude that “the more cloistered nature of national laboratories is associated with a much more muted, perhaps even negative, impact” on startup activity.

More than an Ivory Tower: The Impact of Research Institutions on the Quantity and Quality of Entrepreneurship