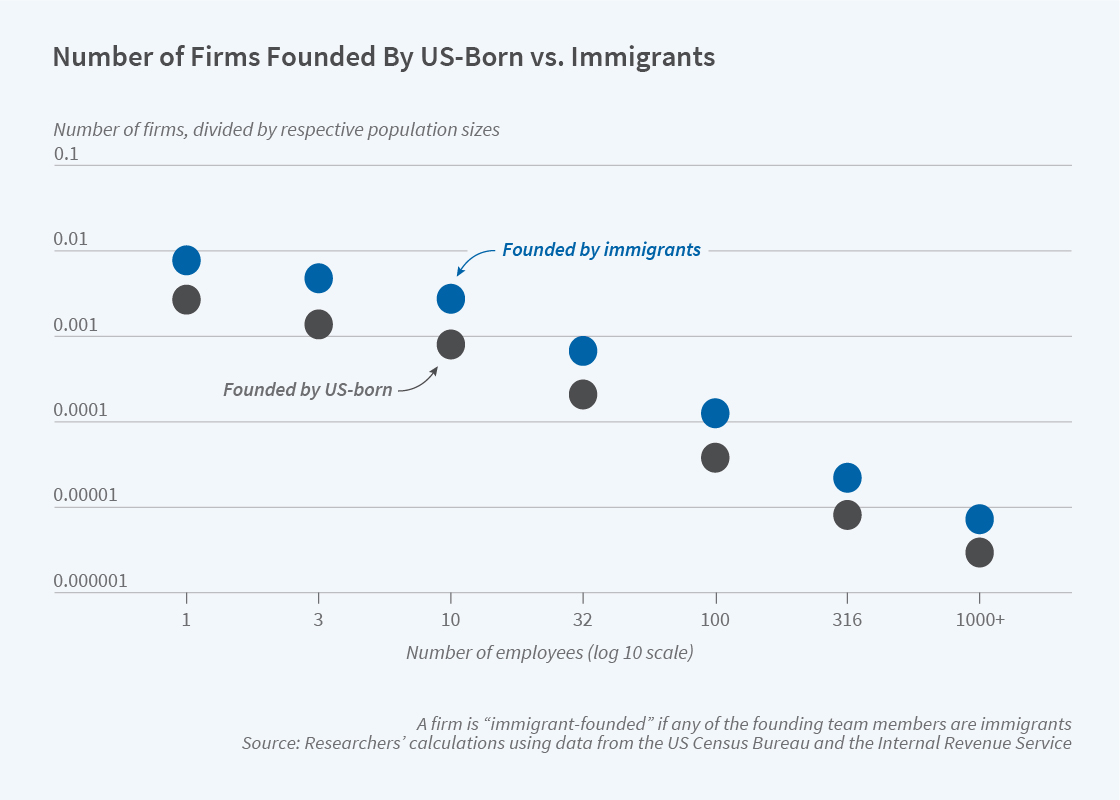 Analysis of a million firms founded between 2005 and 2010 finds that immigrants are more likely than native-born Americans to launch new enterprises of all sizes.

The researchers analyze data on more than a million firms that were founded between 2005 and 2010 and that survived for at least five years. They find that 0.83 percent of the immigrants in the US workforce launched a business during this period, compared with 0.46 percent of the native-born. This finding suggests that immigrants can play an important role in expanding the demand for labor, as well as in supplying labor.

The researchers examine two additional datasets to confirm their findings.  One, the 2012 Survey of Business Owners, which analyzes a sample of all US businesses in that year, yields the same pattern as the startup data.  Relative to their population share, immigrants are more likely to appear as the founders of businesses in these data.  The other dataset, the set of Fortune 500 firms, also displays an over-weight of immigrant founders.  This underscores that the higher concentration of immigrant founders is evident in businesses of all sizes.  The researchers do not find any significant differences in the wages paid by immigrant-founded firms and those launched by native individuals.
Immigrants are more likely than native-born workers to hold STEM degrees.  Their overrepresentation in the technology sector, which puts a premium on innovation, may help explain their greater likelihood of starting businesses.  Among firms started between 2005 and 2010, those with an immigrant founder were 35 percent more likely to have obtained a patent than those with only native-born founders. Among larger firms in this sample, the gap was even larger. The researchers note that commercialization of new technologies by startup businesses often generates spillover effects.  Although difficult to measure, these can magnify the impact of immigrant entrepreneurs on both employment and economic growth.

While immigrant entrepreneurs are over-represented in businesses of all sizes, their presence is most pronounced among small businesses. Limited social networks, language barriers, and discrimination may make it harder for immigrants than for their native-born counterparts to find good-paying jobs in established firms. Starting a business may be more attractive by comparison.

It is also possible that immigrants have a greater aptitude for, and interest in, entrepreneurship than the population as a whole. The act of immigrating itself reflects a willingness to take risks.  The US visa process also favors people with higher skills and education, particularly in technical fields in which entrepreneurship is common.

The researchers conclude that their findings, which highlight the role of immigrant entrepreneurs in creating jobs, may help to advance the debate over immigrants’ economic roles. Research and commentary often focus on labor supply effects and view immigrants as potential competitors to local native-born workers. In light of the entrepreneurship results, immigrants may play especially forceful roles in job creation, and previous studies examining “natural experiments” in immigration policy — which often fail to detect any adverse effects of immigration on natives’ employment or wages — appear less puzzling than previously thought.