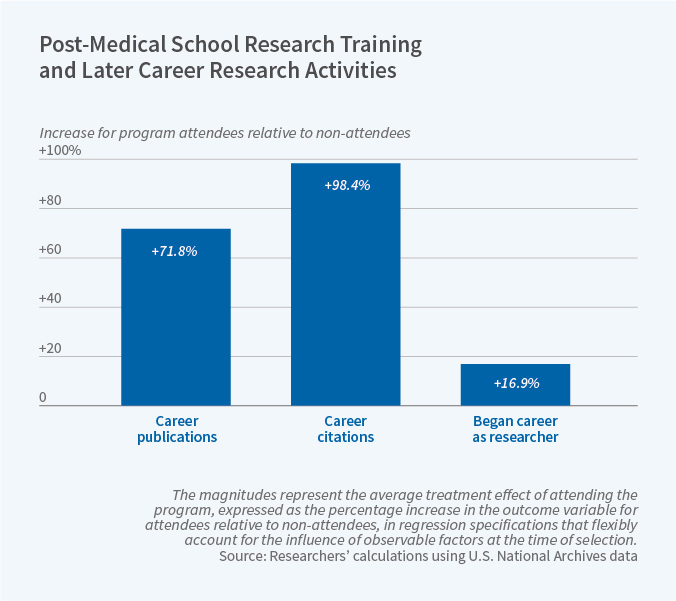 Introducing young doctors to intensive research programs early in their careers can have a large impact on their long-term professional development and lead them to pursue productive academic research careers more often than similar doctors who do not participate in such programs, according to a study by Pierre Azoulay, Wesley H. Greenblatt, and Misty L. Heggeness, Long-Term Effects from Early Exposure to Research: Evidence from the NIH “Yellow Berets” (NBER Working Paper No. 26069).

Seeking to understand what motivates talented people to enter — and stay in — innovative research and development roles, the researchers hypothesize that research careers can often be thwarted by small negative shocks or early-career decisions to embark on career paths that become difficult to redirect later in life. They suggest that early training interventions might influence the career trajectories of young talent.

The researchers sought data on a population which was “naïve to research” yet possessed the skills needed to pursue research careers, and which had been selectively exposed to an intense program of intellectual activity. The Associate Training Program (ATP) of the National Institutes of Health (NIH) met these criteria. The ATP received a surge of applications from 1965 to 1975 during the Vietnam War from young physicians seeking to fulfill their military service through the program. The two- or three-year program trained young doctors to work at NIH under the supervision of its highly regarded biomedical researchers. The dataset analyzed by the new study’s authors includes 3,075 male physician applicants to the program who, after passing a first screen based on their application dossier, also received an on-campus interview during the 10-year sample period. Rich oral histories from NIH officials and alumni of the program imply that, conditional on surviving to the final phase of the selection process, the ultimate acceptance decision reflected more the vagaries of the in-person interviewing process than unobserved markers of research aptitude. Of the total sample, 1,929 physicians entered the program while 1,146 did not.

The researchers tracked the two cohorts over the length of their careers, identifying three distinct phases of productive output for each physician: an education phase (pre-ATP application), a training phase (internships, residencies, fellowships), and an independent phase (after training through retirement or death). They tallied each applicant’s publications, citations, patents, and NIH grants through 2017. In 2017, the youngest applicant from the sample was 65 years old with a career that spanned more than 30 years.

The researchers found that the ATP participants out-performed their non-participant peers in several indicators of research success: they published and earned grant funding at a higher rate, they had a higher citation impact, and they entered research positions at a higher rate and stayed for a longer time. The data show that ATP participants continued engagement in scholarly production throughout their careers. The researchers also documented a trend among the ATP participants of using the NIH’s “bedside to bench” approach throughout their publications, suggesting that their NIH training had a long-lasting effect.

While the study does not examine the mechanisms that made the ATP successful, the researchers believe that the strong network among the cohort and their instructors as well as the unique skill-building opportunities provided at NIH likely played a part. They suggest, cautiously, that short, intensive programs similar to ATP could be a tool for propelling young innovators to join the “ideas sector” for the long term.

Health, Education, and Welfare
Education
Other
Accounting, Marketing, and Personnel
Development and Growth
Innovation and R&D

Long-term Effects from Early Exposure to Research: Evidence from the NIH "Yellow Berets''