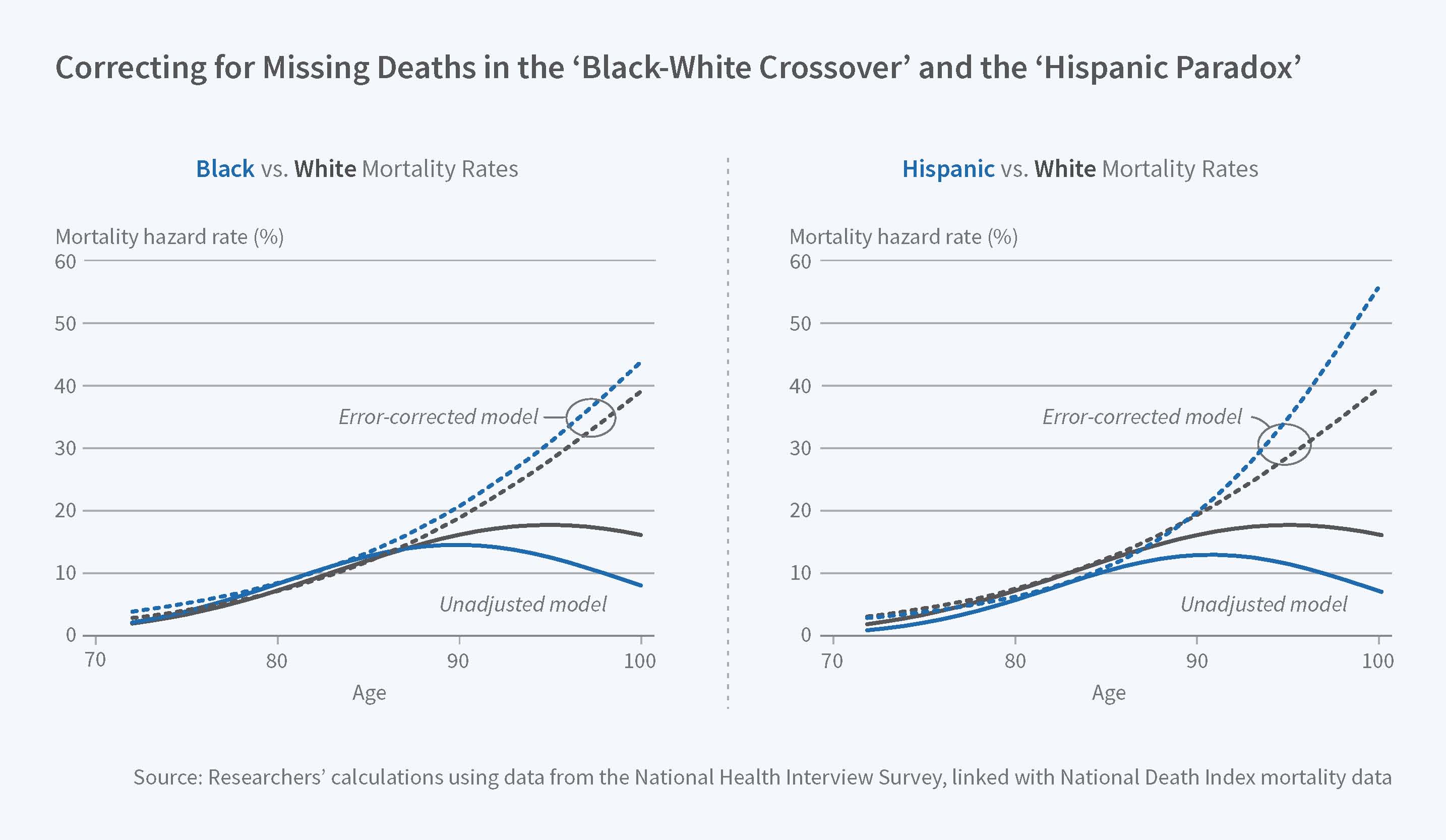 The "Hispanic paradox" and the "black-white mortality crossover" are phenomena related to racial and ethnic differences in mortality that have generated substantial interest beyond the scientific community. The former refers to the empirical generalization that Hispanic and Latino Americans have mortality rates that are similar to or lower than those of their non-Hispanic white counterparts, an outcome that is seen as paradoxical given the socioeconomic differences between the two groups. The latter concerns the finding that although blacks have higher mortality rates than whites at younger ages — an unsurprising result given racial differences in socioeconomic factors — this pattern reverses at older ages.

Numerous theories have been advanced to explain these anomalous findings, including the possibility that they are primarily due to bad data. After decades of work to identify and correct data issues, demographers have largely concluded that careful data correction mitigates, but does not eliminate, these findings.

In The Methuselah Effect: The Pernicious Impact of Unreported Deaths on Old Age Mortality Estimates (NBER Working Paper No. 23574), researchers Dan Black, Yu-Chieh Hsu, Seth Sanders, Lynne Schofield, and Lowell Taylor offer a fresh perspective on this issue. The researchers focus on a particular data problem — which they denote the "Methuselah effect" — and explain how it can bias inferences about old age mortality.

The intuition of the Methuselah effect is straightforward. Suppose that in a sample of respondents that is being tracked over time and used to calculate mortality rates, a respondent dies at a particular age but the death is not matched to the original sample respondent. At all future ages, the estimated mortality rate (calculated as the number of deaths among people of a given age relative to the number of people who reached that age alive) will be an underestimate of the true rate because the number of people alive is smaller than measured. Mortality estimates will become progressively more downward-biased at older ages, as the effect of missing deaths cumulates with age. Crucially, if the failure-to-match rate varies by group characteristics such as race or ethnicity, the measurement error will affect cross-group comparisons of mortality rates.

To explore the empirical relevance of this issue, the researchers use the National Longitudinal Survey of Older Men (NLS-OM), a survey of men born between 1906 and 1921 that ran from 1966 through 1990. There are multiple sources of information on deaths of NLS-OM participants, including the 1990 survey data, a hand match to Vital Statistics (VS) death records in 1990, an electronic match to VS records in 2008, and a match to the Social Security Administration (SSA) Death Index file. The number of reported deaths through 1990 is dramatically different across the four sources. Among respondents reported dead in the 1990 survey, the hand match of VS data failed to identify the death in 28 percent of cases for blacks, 30 percent for non-black Hispanics, and 19 percent for non-Hispanic whites. The rates of missing death data were 21, 15, and 11 percent for the three groups, respectively, in the SSA data. The lowest rates of measurement error were in the electronic match to VS records, which nonetheless missed 4.2 percent of deaths among blacks and 1.8 percent among non-Hispanic whites (there were no missing deaths among the sample's 82 non-black Hispanic respondents).

The researchers also explore this issue using the National Health Interview Survey (NHIS), an annual cross-sectional survey that is linked to the National Death Index (NDI), a centralized database of death records from state vital statistics offices. The researchers focus on some 3,700 NHIS respondents who were aged 85 and above when sampled in the late 1980s. The number of these individuals that is expected to be alive more than two decades later in 2011 is extremely small — just 0.7 blacks, 0.1 non-black Hispanics, and 5.3 non-Hispanic whites, based on SSA life tables. In fact, there are 45 black, 15 non-black Hispanic, and 216 non-Hispanic white respondents that are not in the NDI. It is clear that virtually all of these individuals are deceased, despite their lack of a death record. As in the NLS-OM, blacks and non-black Hispanics experience higher rates of unreported deaths than non-Hispanic whites.

Finally, the researchers estimate how correcting for Methuselah error affects mortality rates. A "naive" model that ignores unreported deaths generates the familiar black-white crossover and Hispanic paradox phenomena. In the error-corrected model, the mortality rate for blacks is above that for whites at every age, while the mortality rates for Hispanics and whites are initially similar and then higher for Hispanics after age 90. As the researchers note, "it appears that in these data both the black-white crossover and the Hispanic paradox are due entirely to the Methuselah effect." The apparent deceleration in mortality rates at higher ages — another phenomenon that has drawn scrutiny from demographers — also disappears in the error-corrected model.

In sum, there are non-negligible errors in the reporting of deaths in survey data and the magnitude of the problem differs by race and ethnicity. "Failure to recognize the error, and correct for it, could lead us to believe in mortality rate deceleration, the black-white mortality crossover, and the Hispanic paradox. Correction for the error reverses all of these inferences." The researchers note that there may be other cross-group differences in error rates that could be incorporated in mortality models to further improve them and also that the possible misreporting of age in surveys merits further attention. They conclude "a great deal more work lies ahead for demographers interested in the accurate assessment of mortality at older ages."