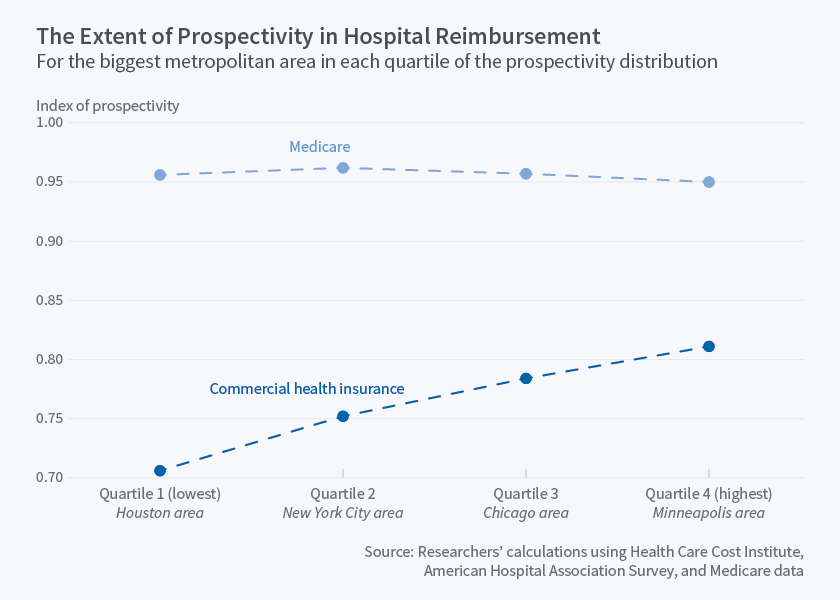 Under prospective payment, providers are paid a fixed amount per episode of care, with the payment determined only by the patient's medical condition. Importantly, the payment is independent of the actual medical services provided, removing the financial incentive for providers to administer additional services in order to raise reimbursements. Such a scheme is in contrast to a fee-for-service payment system, in which providers are reimbursed based on the specific services provided.

The researchers construct a measure of prospective payment use for 300 metropolitan statistical areas for the years 2008-12, using data from the Health Care Cost Institute on over five million claims from 1,300 hospitals. To do so, the researchers estimate separate models for each hospital and year in which they relate patient billings to diagnoses (defined by "diagnosis-related groups," or DRGs, the classification system used in Medicare prospect payment). Their prospective payment measure is the share of differences in patient billings that can be explained solely by patients' diagnoses. If this value is, say, 80 percent, then the remaining 20 percent of differences in billings is due to other factors — for example, the intensity of services provided, which is relevant for patients whose insurance uses fee-for-service reimbursement. This value is termed the prospec-tivity index.

A second key finding is that the extent of prospectivity in commercial insurance varies considerably, not only across individual hospitals but also across geographic areas. In 2012, average prospectivity varied from 71 percent in the Houston metro area to 81 percent in the Minneapolis-St. Paul area.

Finally, the researchers examine factors that may help explain differences across hospitals in prospectivity. They find that there is more prospective payment in commercial insurance when hospitals are in more competitive markets, have a greater share of patients in managed care insurance (health maintenance organization or point of service plans rather than preferred provider organizations), and have a larger share of Medicare patients. The first two findings suggests that hospitals may use market power to influence the terms of insurance contracts as well as price and that preferred provider products with broad networks, which give insurers less bargaining power with hospitals, can have the same effect. The last finding suggests that there may be spillover effects whereby the DRG payment system influences treatment decisions for non-Medicare patients.

The researchers caution that their findings are based on a measure of payment incentives constructed from claims data rather than from actual contracts, and also that they cannot make a full assessment of the welfare effects of prospective payment because they do not observe patient health outcomes or out-of-pocket spending. They note that this is clearly a fruitful area for future research, as there is "wide agreement in the health policy community that PPS [Medicare's adoption of its own Prospective Payment System] successfully lowered relatively unproductive health spending."

At least one co-author has disclosed a financial relationship of possible relevance for this research. Further information is available online at http://www.nber.org/papers/w22709.ack.