Economic Development and Gender Equality: Exceptions to the Rule

Women lag further behind men in poor countries than in rich countries in terms of educational outcomes, health status, decision-making power in the family, and other aspects of well-being. As a rule, the process of economic development levels the playing field for women in the labor market. As an economy grows, its service sector expands, while agriculture and other primary industries shrink in importance; women have a comparative advantage in jobs that require brains rather than brawn. Similarly, economic development brings about — and is often enabled by — lower lifetime fertility for women, which frees up their time to invest in their careers. Better career prospects for women, in turn, lead parents to invest more in their daughters' educations, and economically empowered women have more say in their households. I have recently reviewed the large literature on how economic progress brings about progress for women.1

However, there are also exceptions to the rule — ways in which cultural norms about gender stubbornly persist in the face of economic progress.2 My recent research, focusing on India, has examined situations in which movement toward gender equity has leveled off or regressed. Specifically, my colleagues and I have examined negative ramifications of parents' favoritism toward their eldest son and obstacles to women's success in the labor market. This summary describes some of our findings.

Implications of Parents' Strong Desire to Have a Son

In India, older couples live with their eldest son, and the eldest son gets priority for inheritance. He also plays important roles in Hindu funeral rites. Having a son to fulfill these roles is therefore very important to couples, and they tend to favor their eldest son over their other children. This eldest son preference strongly shapes couples' fertility decisions and their investments in their children, with important implications for child health. It creates not only inequality between boys and girls, but also among boys and among girls, and it can reduce average child health outcomes.

Rohini Pande and I found that eldest son preference helps explain India's unexpectedly high rate of stunting among children under age five.3 Height is a commonly used measure of child well-being, not because we care about height per se, but because height reflects the nutrition and illness a child has experienced during the critical early years of life. Childhood stunting has been linked to low cognitive ability, poor health, and low earnings later in life. India is a poor country, so it is unsurprising that stunting is more prevalent than in a rich country such as the United States, but researchers have been puzzled by the high level of stunting in India compared to other countries at a similar level of economic development. Pande and I compare India to a set of sub-Saharan African countries which, though they are poorer than India, have lower levels of stunting.

We find that child height varies considerably among siblings, and specifically that there is a strong drop-off with birth order. This birth order gradient is observed in almost all societies, but it is especially strong in India. Firstborn Indian children are no shorter than their sub-Saharan African counterparts. The India height puzzle is mostly concentrated among later-born children, as shown in Figure 1.

Firstborn children's genes do not differ systematically from the genes of younger siblings. Infrastructure for clean water and sanitation also do not vary much among siblings; if anything, they improve over time, which would help later-born children. Disparities within families suggest that parents' choosing to provide more inputs for some children than for others explains a lot of the height puzzle. We find that health inputs such as vaccinations and prenatal visits also exhibit an unusually steep drop-off with birth order in India.

We also investigate the role of eldest son preference, and find that it is at the root of India's steep birth order gradient. If parents dote on the first-born son, there will be a steep birth-order gradient among boys. How favoritism for eldest sons hurts later-born girls relative to their older sisters is more subtle. First, an earlier-born girl is less likely to have a brother yet, and so is less likely to be competing with a boy for resources when she is young. We find much less inequality among siblings in regions of India where son preference is weaker, such as the matrilineal state of Kerala, and for Muslims, who do not have strong eldest son preferences, compared to Hindus.

A second key channel is parents deciding to have more children than originally planned in order to have a son. Consider a couple who desire two children; they will likely view the birth of a second daughter as an unpleasant surprise and decide to keep trying for a son. They will need to start economizing because now they will have more children to support than they had planned, and those spending cutbacks hit the second-born daughter in her critical early years. This behavior generates some quite specific predictions, which are borne out in the data, about how parents' investments depend on the composition of the sibling group. Finally, we show that within-family inequality lowers average child health outcomes in India. With diminishing returns to investment, concentrating investments on a favored child hurts aggregate outcomes. Parents might be maximizing their own well-being by favoring one child, but given potential positive externalities of a healthier and more skilled workforce, their favoritism could be inefficient, and a drag on India's economic progress.

In an earlier paper, Ilyana Kuziemko and I studied another way that Indian parents' desire to have a son as quickly as possible has negative spillovers, specifically for girls.4 When parents without a son give birth to a girl, their eagerness to "try again" for a son reduces the duration that their daughter is breastfed. Some mothers know that breastfeeding suppresses fecundity and therefore wean their newborn girl quickly. Others might simply become pregnant again — nursing does not make a woman completely infecund — which triggers them to stop breastfeeding. In contexts where water and food are unsanitary, a shortened duration of breastfeeding can be harmful to child health. We find that this behavior is an important contributor to girls' mortality in India. This harm to girls is an unintended consequence rather than a conscious choice resulting from a decision to invest more in sons than daughters. It nevertheless disadvantages girls.

The Worsening Problem of 'Missing Women'

Perhaps the most extreme consequence of the desire for sons is selective abortion of female fetuses. Amartya Sen called attention to this problem of "missing women" in 1990, and it has worsened in India, as well as in China and elsewhere, in the three decades since.5 One reason is increased access to ultrasound tests and other technology that can determine fetal sex. My research has highlighted another contributing factor: the move toward smaller families. Rapidly changing norms about family size in India have collided with the persistent cultural importance of eldest sons.6 It is not the case that parents in India want all their children to be boys; if they were to have two children, most would ideally want one son and one daughter. But the exalted role of the eldest son means that having at least one son is very important. Couples who want four or five children are very likely to end up with a son naturally (94 and 97 percent, respectively), but at a family size of two — which is increasingly the desired family size in India — a quarter of couples would end up with two daughters if they did not intervene, and thus many opt for sex-selective abortions. Using a novel way of eliciting fertility preferences, I show that the growing desire for small families explains a third to a half of India's worsening sex imbalance in recent decades.

These findings also highlight a paradox. Because women might value daughters more than men do, and because female education strengthens women's say in household decisions, we might expect that educating women would reduce the prevalence of gender selection. However, there is also another important force: Educated women typically want fewer children, which increases their "need" to resort to gender selection. Empowering women will not necessarily eliminate the problem of "missing women." This conclusion raises the question of how, if at all, policy might address the challenge of "missing women." In current work, Diva Dhar, Tarun Jain, and I are evaluating whether incorporating classroom discussions of gender norms into the government secondary school curriculum makes adolescents less tolerant of gender discrimination and begins to reshape those norms.7

Another way in which India's cultural norms might be constraining its growth relates to female employment. The female labor force participation rate has been rising in most developing countries recently, but in India it has fallen over the past decade.8 Social restrictions on women's ability to interact with men outside their family or to travel unaccompanied within their village or city are barriers to women's employment. Many women turn to home-based self-employment, such as tailoring clothes or making incense sticks, but the same social restrictions can hurt the success of these small businesses, in part because the women have limited opportunity to network with and learn from peers. Erica Field, Pande, Natalia Rigol, and I evaluated a popular type of program to help small-scale entrepreneurs, namely business skills training.9 In one variant of the program, we added the feature that women could bring a friend with them to the classes. Program participants took out more business loans and earned higher incomes, but only in the variant where they could bring a friend. We cannot say for sure what led to this result, but having a friend's support seemed to give women the wherewithal to set more ambitious business goals and achieve them. In this case, without reshaping the cultural norm, redesigning a program in light of the norm promoted entrepreneurship among women. 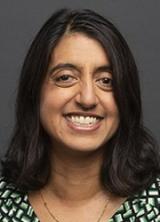 Seema Jayachandran is an associate professor of economics at Northwestern University and a research associate in the NBER Development Economics and Health Care Programs.

Jayachandran co-chairs the health sector of the Abdul Latif Jameel Poverty Action Lab and serves on the board of the Bureau for Research and Analysis of Economic Development. She is a reviewing editor at Science and an associate editor for the American Economic Review, the Quarterly Journal of Economics, and the Journal of Economic Perspectives.

Jayachandran received her Ph.D. in economics from Harvard University in 2004. She also holds an M.A. in physics from Harvard, an M.A. in physics and philosophy from the University of Oxford, and an S.B. in electrical engineering from MIT. Prior to joining Northwestern, she was on the faculty at Stanford University from 2006–11 and a Robert Wood Johnson Scholar in Health Policy Research at the University of California, Berkeley from 2004–06. She is a recipient of an NSF CA-REER Award and a Sloan Research Fellowship.