The Financialization of Commodity Markets

Over the last decade, commodity futures have become a popular asset class for portfolio investors, just like stocks and bonds. This process is sometimes referred to as the financialization of commodity markets. According to an estimate provided by the Commodity Futures Trading Commission (CFTC) in 2008, investment inflows to various commodity futures indices from early 2000 to June 30, 2008 totaled $200 billion.1 The increasing presence of financial investors in commodity markets has led to a growing concern of the public and in policy circles as to whether financialization might have affected commodity prices and whether more government regulation in these markets is warranted.

In particular, the synchronized boom and bust cycle in 2007-8 in a large number of commodities across the energy, metal, and agricultural sectors has led to a heated debate regarding whether speculation in commodity futures markets caused a bubble in commodity prices. Testing to determine whether there actually was a price bubble is challenging and deflects attention from analyzing more nuanced impacts of financialization on commodity markets. Mindful of these considerations, in a series of studies my co-authors and I focus on analyzing how the increasing presence of financial traders has transformed commodity markets through the economic mechanisms that underpin these markets: risk sharing and information discovery. This research summary provides an overview of these studies. Ing-Haw Cheng and I have also written a broader review of the literature on the financialization of commodity markets and on the debate about whether there was a price bubble.2

Prior to the early 2000s, despite liquid futures contracts being traded on many commodities, their prices offered a risk premium for idiosyncratic commodity price risk, and had little co-movement with stocks or with each other. 3 These aspects are in sharp contrast to the price dynamics of typical financial assets, which carry a premium only for systematic risk and are highly correlated with market indices and with each other. This contrast indicates that commodity markets were partially segmented from outside financial markets and from each other.

Ke Tang and I present evidence that financialization has increased the integration of commodity futures markets with each other.4 We find that futures prices of non-energy commodities became increasingly correlated with oil prices after 2004, when significant index investment started to flow into commodities markets. Figure 1 shows that while this trend intensified after the world financial crisis triggered by the bankruptcy of Lehman Brothers in September 2008, its presence was already evident and significant before the crisis. In particular, this trend was significantly more pronounced for commodities in the popular S&P-GSCI and DJ-UBS commodity investment indices than for those off the indices after controlling for a set of alternative arguments. The trend increase in the difference in futures price co-movements with oil between indexed and off-index commodities is related to the large inflows of investment capital to commodity index securities during this period. 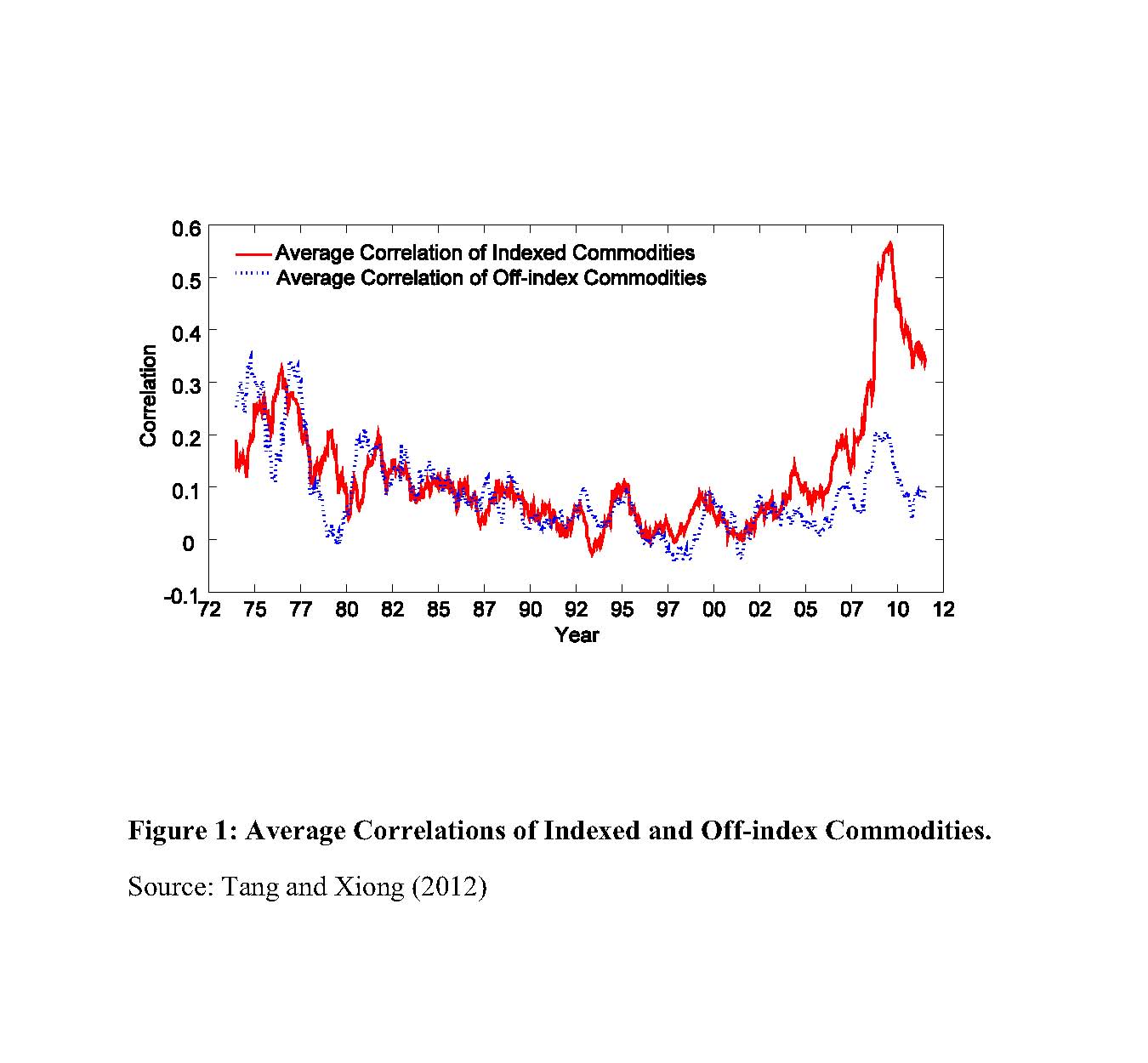 A compelling alternative argument for the increased co-movements between commodity prices is the rapidly increasing commodity demands from fast-growing emerging economies such as China.5 Indeed, there is evidence of an increasing return correlation between commodities and the Morgan Stanley emerging market equity index in recent years. However, we also find that co-movements of commodity futures prices in China remained stable in 2006-8, which was in sharp contrast to the large increases in the United States during this period. This contrast again suggests that the increases in commodity price co-movements were not all driven by changes in supply and demand of commodities from the fast-growing emerging economies. 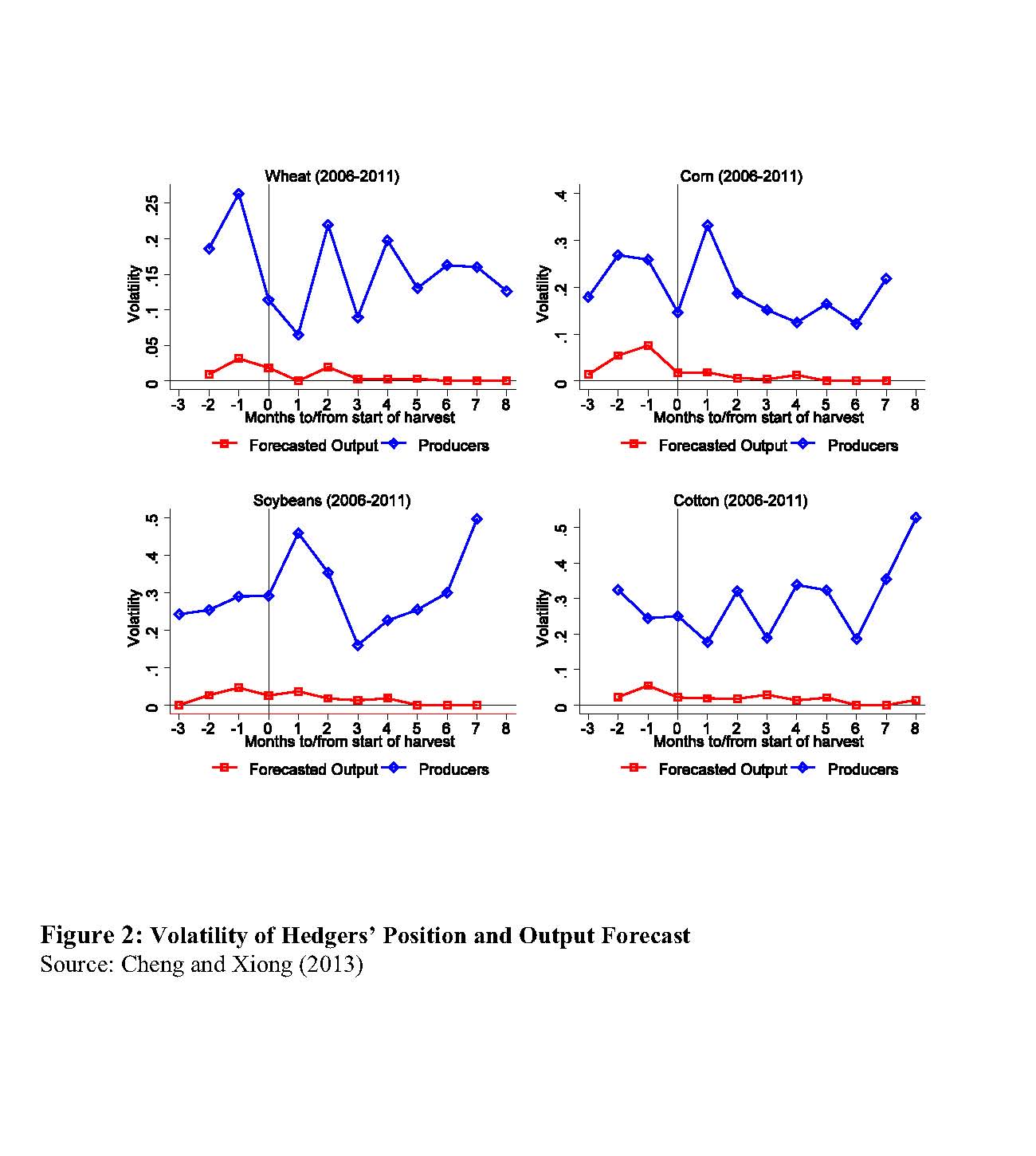 A common practice in both academic and policy studies of speculation and hedging in futures markets is to treat trading by hedgers as hedging and trading by speculators as speculation. Like financial traders who might have hedging needs, hedgers may also engage in speculative trading. In a recent study, Cheng and I specifically analyze whether hedging motives can sufficiently explain trading by hedgers in futures contracts of four agricultural commodities - wheat, corn, soybeans, and cotton - for which we have relatively clean measures of hedgers' positions and needs.8 Figure 2 shows that in each of these commodities, the volatility in hedgers' futures positions, measured by the volatility of the monthly percentage change of their aggregate short position, is many times greater than the cross-harvest volatility of monthly percentage changes in USDA output forecasts, which ultimately determine the hedgers' hedging need. Interestingly, price changes prove to be a far better explanatory variable for short-term changes in hedgers' positions than changes in output forecasts. Specifically, hedgers tend to sell more futures when prices rise and buy back futures when prices fall. 9 These findings suggest that while hedgers take short positions in futures markets to hedge their commercial risks, they may also engage in speculation on the margin.

Taken together, my studies present a more nuanced view of risk sharing in commodity futures markets than the prior literature suggests. While financialization causes more financial traders to share the commodity price risk of hedgers, financial traders may have to demand liquidity from hedgers when they experience their own financial distress, which occurred during the recent financial crisis. On the other side, hedgers trade not just to hedge and hedgers may engage in speculation against financial traders as well. To fully understand risk sharing in commodity futures markets thus requires identifying the motives of both sides of individual trades rather than simply classifying traders into different categories and then separating speculation from hedging based on the categories.

In my joint work with Michael Sockin, we develop a theoretical framework to highlight an informational feedback channel for trading in commodity markets to affect commodity demand.10 This framework integrates commodity market trading under asymmetric information with an international macro setting. In this setting, a continuum of specialized goods producers whose production has complementarity, which emerges from their need to trade produced goods with each other, faces unobservable global economic strength and demands a key commodity, such as copper, as a common production input. Through the trading of the commodity either in a spot or futures market, the equilibrium commodity price aggregates dispersed information regarding global economic strength and, in turn, affects the goods producers' expectations. Through this channel, informational noise in the commodity price, which may originate from either supply shocks or trading in futures markets, affects the goods producers' demand for the commodity.

In contrast to conventional wisdom that a higher commodity price leads to a lower quantity demanded by goods producers, our model shows that demand may increase with price. This happens because a higher commodity price signals a stronger global economy and motivates each goods producer to demand more of the commodity for producing more goods. This informational effect offsets the cost effect. The complementarity in production among goods producers magnifies the informational effect through their incentives to coordinate production decisions and can even lead to a positive price elasticity of their commodity demand.

Conghui Hu and I provide empirical evidence that supports commodity futures prices as barometers of global economic strength in recent years.11 Specifically, we find that in 2005‒12, the stock prices of five East Asian economies—China, Hong Kong, Japan, South Korea, and Taiwan—had positive reactions to lagged overnight futures prices of copper and soybeans traded in the United States, and weaker reactions to crude oil. Interestingly, these East Asian economies are all net importers of these commodities. The positive price reactions indicate that East Asian stock markets tended to interpret the rising futures prices as signals of strong global demand for their produced final goods despite the higher input factor cost during the sample period.

The important informational role of commodity prices has an intricate implication for empirical detection of speculative effects in commodity markets and in particular for understanding the boom and bust of commodity prices in 2007‒8. After the oil price boom in 2008, many commentators pointed toward the lack of inventory response to rising oil prices as a reason to doubt speculative effects on oil prices. The logic is as follows: if speculation artificially drives up oil prices, the increased prices would reduce oil consumption and thus lead to more oil storage. According to this logic, the lack of a spike in oil inventory during the oil price boom suggests that the rising oil prices during this period were justified by rising oil demand. This logic, while intuitive and compelling, ignores the aforementioned informational effect of oil prices. When the informational effect is sufficiently strong, it is possible for speculation to drive up oil prices without causing demand to fall or inventory to rise.

Indeed, it is difficult to fully explain the large price increases of crude oil, copper, and other key commodities in the first half of 2008 simply based on rising commodity demands. In this period, oil prices increased by 40 percent before peaking at $147 per barrel in intraday trading in July 2008. Major world economies such as the United States were falling into recession in late 2007, with the United States beginning its recession in December 2007 (as determined by the NBER). The S&P 500, FTSE 100, DAX, and Nikkei equity indices had peaked by October 2007, and with the collapse of Bear Stearns in March 2008 the world financial system was facing imminent trouble. Growth in emerging economies such as China was also slowing: year-on-year growth in China's GDP peaked in mid-2007, and the Shanghai CSI 300, MSCI China, and broader MSCI Emerging Markets equity indices peaked in October 2007. With the benefit of hindsight, it is difficult to argue that the growth of the emerging economies, which were heavily dependent on exports to developed economies and were themselves slowing, was strong enough to more than offset the weakness in the developed economies and to push up oil prices by more than 40 percent over the first half of 2008.

On the other hand, it is reasonable to argue that there was great uncertainty regarding the strength of the global economy during this period. As shown in recent work by Kenneth Singleton, the large oil price increases in early 2008 were accompanied by a greatly increased dispersion of one-year-ahead oil price forecasts by professional economists.12 In this uncertain environment, agents in the economy might have reasonably interpreted the large increases in futures prices of oil and other commodities as positive signals of robust commodity demand from China and other emerging economies. Through this informational channel, speculation in commodity futures markets might have affected commodity demand and prices.

2. I. Cheng and W. Xiong, "The Financialization of Commodity Markets," NBER Working Paper No. 19642, November 2013, and forthcoming in the Annual Review of Financial Economics.

Wei Xiong is a Research Associate in the NBER's Program on Asset Pricing, and a Professor of Economics at Princeton University, where he has been on the faculty since 2000. He received his Ph.D. in Finance from Duke University in 2001. Before that, he studied physics, receiving a B.S. from the University of Science and Technology of China in 1993 and his M.A. from Columbia University in 1995.

Xiong's research focuses on capital market frictions and behavioral finance. His recent work explores the financialization of commodity markets, belief distortions in the financial sector, and China's financial markets. In 2012, he received the Amundi Smith Breeden Award for best paper published in the Journal of Finance.

Xiong lives in Princeton, New Jersey, with his wife Lin and their seven-year-old daughter Meiya and four-year-old son Yi-Tian.