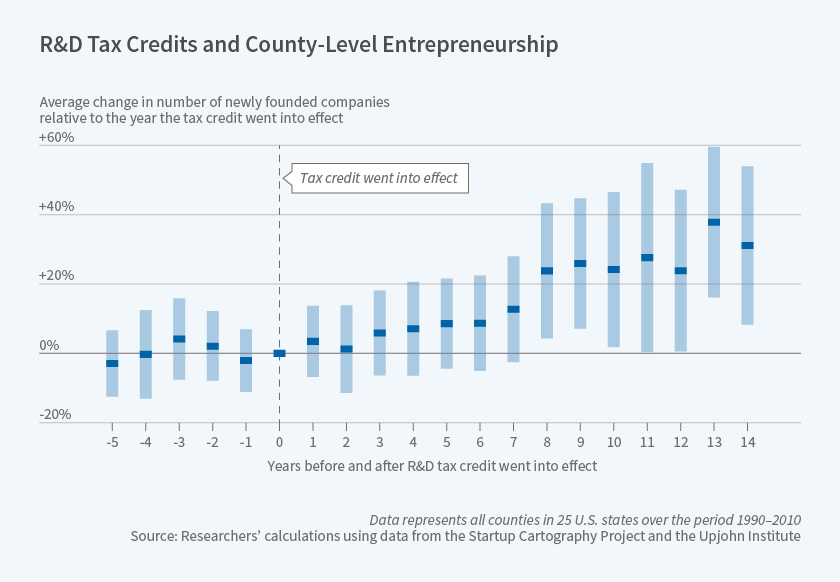 State-level credits increase average entrepreneurial activity by around 7 percent; counties in states with R&D credits experience a rise in new firm formation of more than 20 percent over 10 years.

Tax credits for research and development (R&D) spending were initially designed to encourage existing firms to increase their investments in R&D, and many studies suggest that these policies achieve this goal. There is little evidence, however, on whether R&D tax credits also affect the entry and growth of new businesses.

In The Impact of State-Level R&D Tax Credits on the Quantity and Quality of Entrepreneurship (NBER Working Paper No. 26099), Catherine Fazio, Jorge Guzman, and Scott Stern find that the introduction of a state-level R&D tax credit has a positive effect on entrepreneurial activity.

The researchers combine data from the Startup Cartography Project, which tracks the quality, quantity, and performance of entrepreneurship in the United States, with information from the Upjohn Institute’s Panel Database on Incentives and Taxes, which records the availability and effective rates of state-level tax incentives. This combined dataset has entrepreneurship and tax credit measures for all counties in 25 states in the period 1990 to 2010.

The researchers use this data to study how tax credits affect the number of new firms, which they define as “the quantity of entrepreneurship,” as well as the quality of those firms. They measure quality by the extent to which start-up firms have characteristics at or around the time of registration that have been shown to predict a higher likelihood of achieving high-growth events. Such characteristics range from having a structure that invites equity financing, to seeking a patent or trademark, to having a short name.

The researchers control for potentially confounding factors such as the rate of urbanization and business cycle effects, and they find a 7.5 percent average difference in the overall quantity of entrepreneurship in counties with R&D tax credits compared to those without. The difference is similar after adjusting for quality of new firms as well as other factors.

The researchers then contrast the effect of R&D tax credits with another common tax incentive, the state-level investment tax credit, which is intended to encourage existing businesses to make capital-intensive investments. They find that this credit does not boost entrepreneurship. Over the longer term, it is also associated with a decline in the quality-adjusted quantity of new firms founded.

The researchers suggest that by enhancing the competitiveness of established businesses, the investment tax credit may deter growth-oriented entrepreneurship over time. They conclude that tax policy can play an important role in stimulating regional entrepreneurship, particularly of the high-growth firms that have been shown to contribute to net job creation in the United States.