Did a Legal Ivory Sale Increase Smuggling and Poaching? 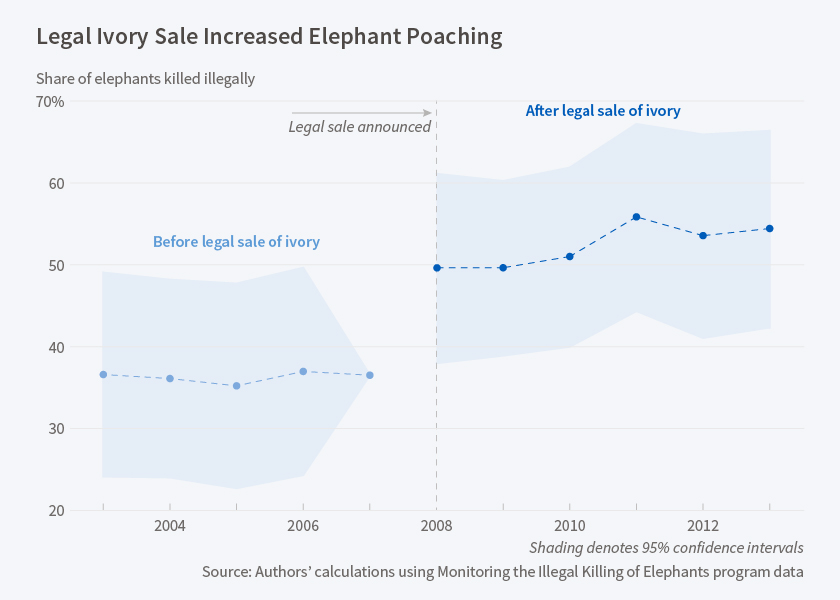 After the experimental 2008 sale, there was a discontinuous jump in the proportion of wild elephants poached and in seizures of contraband ivory leaving Africa.

Advocates of legalizing the purchase of goods sold in black markets argue that allowing legal trade will displace illegal buying and selling, reduce criminal activity, and permit greater control of the previously illegal goods. New research indicates that this is not always the case.

In Does Legalization Reduce Black Market Activity? Evidence from a Global Ivory Experiment and Elephant Poaching Data (NBER Working Paper 22314), Solomon Hsiang and Nitin Sekar show that the production of black market elephant ivory expanded by an estimated 66 percent following a one-time legal sale in 2008. Seizures of contraband ivory leaving African countries also increased, from 4.8 to 8.4 seizures per country per year. The weight of ivory in the seizures increased by an average of 335 kilograms per year.

In 1989, the Convention on the International Trade of Endangered Species (CITES) banned international trade in ivory in order to protect the wild African elephant. Individual countries continued to regulate their domestic ivory trade. Poaching slowed, and elephant populations began to recover. African governments kept stockpiles of ivory harvested from animals that died naturally.

Poaching began increasing again in the mid-1990s. Following a single legal sale from stockpiles to Japan in 1999, China and Japan requested the right to make an additional purchase. After years of debate, the governments of those countries were able to purchase 62 and 45 tons of legal ivory, respectively, at auction in 2008. The governments continue to resell that ivory in their domestic markets.

After the legal sale in 1999, CITES established the Monitoring the Illegal Killing of Elephants (MIKE) program at 79 sites in 40 countries in Africa and Asia. Preliminary data collection began in mid-2002. The Proportion of Illegally Killed Elephants (PIKE) Index is the fraction of "detected elephant carcasses that were illegally killed," a measure designed to correct for fluctuating elephant populations and field worker effort.

The researchers examine how poachers responded to the 2008 sale by studying annual PIKE data from 2003 to 2013. They find a clear discontinuous increase in the index after the 2008 sale. They cannot explain this increase with changes in natural elephant mortality rates, or with economic variables such as China's or Japan's per capita GDP, Chinese or Japanese trade with elephant range countries, measures of China's physical presence in range countries, or per capita GDP in PIKE-reporting countries.

The researchers conclude that the legal sale of ivory "triggered an increase in black market ivory production by increasing consumer demand and/or reducing the cost of supplying black market ivory." Supplier costs may be reduced if legalization of a product makes it more difficult to detect and monitor illegal provision of that product. Consumer demand may rise because legalization may reduce the stigma around a previously banned product.