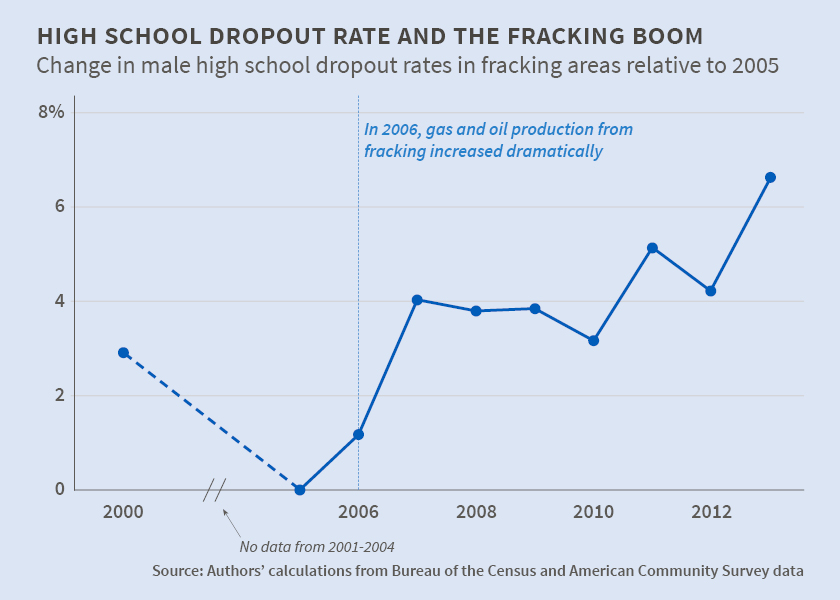 A defining feature of the U.S. labor market since the 1970s has been a rising premium for skill. The disparity between the wages of high- and low-skill workers has increased in part because the economy has evolved in a way that has raised the relative demand for high-skill workers. But over the past decade, the advent of horizontal drilling and hydraulic fracturing has fueled a structural transformation of some local economies. In locations as diverse as North Dakota, Pennsylvania, and Texas, these technologies have sharply increased the demand for low-skill workers.

In Who Needs a Fracking Education? The Educational Response to Low-Skill Biased Technological Change (NBER Working Paper No. 21359), Elizabeth U. Cascio and Ayushi Narayan find that the new extraction technologies have raised local incomes, especially for low-skilled workers, while also increasing high school dropout rates among male teens. They take advantage of the timing of fracking's widespread introduction and of variation in shale oil and gas reserves across locations to document a correspondence between the rising dropout rate and the higher wages available to dropouts.

The authors find that local labor demand shocks from fracking have been biased toward low-skilled workers and toward men, reducing the male return to high school completion. This lends empirical support to the notion that fracking represents low-skill-biased technological change. They also find that fracking has increased high school dropout rates of male teens, but not female teens. Absent fracking, they estimate that the male-female gap in high school dropout rates among 17- to 18-year-olds in the average area with fracking would have narrowed by about 11 percent between 2000 and 2013. Instead, it was unchanged.

The findings imply that there may be long-lived labor market consequences associated with energy-related economic booms. The decision to drop out of school could well be a rational one in the face of increases in the relative wages of low-skill workers. Nevertheless, the authors suggest that some students could be making a mistake by putting too much weight on the present, and that this may have implications for future productivity and the social safety net. By the end of their data sample, in 2013, even though the price of oil remained high, the labor demand from fracking also no longer appeared to favor dropouts. This suggests the possibility that the relatively large income benefits of fracking for high school dropouts were only temporary. Further work is needed to explore potential differences in the impact of skill-biased technological change on wage differentials and educational decisions at other points in the skill distribution.

Who Needs a Fracking Education? The Educational Response to Low-Skill Biased Technological Change