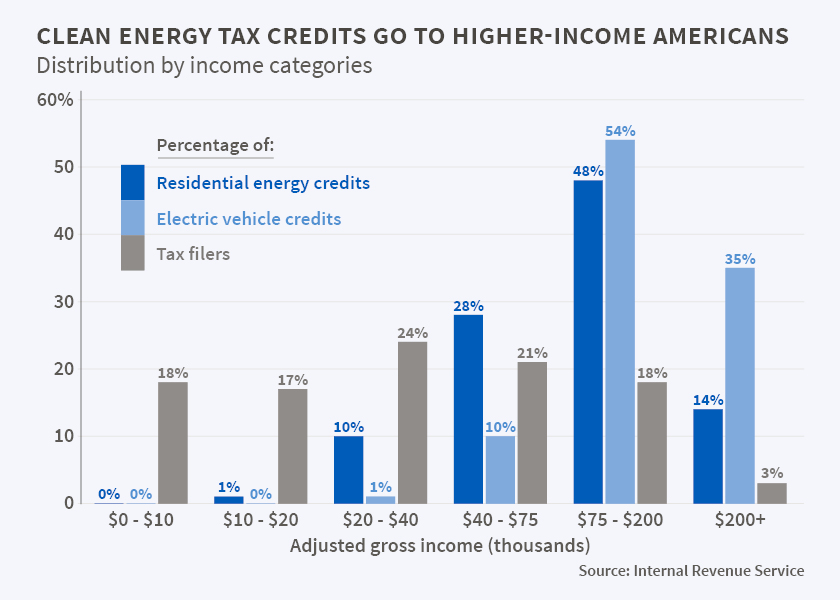 Program designs, ranging from electricity-pricing strategies to rules defining eligibility for tax breaks, have given most clean-energy benefits to higher-income Americans.

In an effort to encourage households to adopt renewable energy technologies, most states subsidize renewable electricity as well as electric cars. The federal government has provided some $18 billion in tax credits to individuals since 2006. While distributional factors are only one of many considerations in the design of these programs, new research indicates that existing credits and subsidies have primarily benefited higher-income Americans.

In The Private Net Benefits of Residential Solar PV: The Role of Electricity Tariffs, Tax Incentives, and Rebates (NBER Working Paper No. 21342), Severin Borenstein analyzes residential electricity use data from 2007 to early 2014 for customers of Pacific Gas and Electric—the utility with the most residential solar customers in the United States. He examines incentives for installing residential solar photovoltaic (PV), which include direct payments, tax credits, and reduced electricity bills. The bill savings are determined in part by the residential electricity tariff design and by the crediting of solar production under "net energy metering."

He finds that solar installations are concentrated among the heaviest electricity-consuming households, probably because California's steeply tiered tariff structure—higher marginal electricity prices for higher-use households—gives such customers a larger incentive to reduce their electricity purchases than it does to their lower-consuming neighbors. On average, high-usage households are in higher income brackets than low-usage households. Further contributing to the disparity in benefits realized by high-use and low-use households is the tendency of smaller users to install larger solar systems than their consumption requires, which reduces their savings per kilowatt hour.

Borenstein's estimates suggest that the net value of installing solar PV was greater for the higher-income households that installed solar during most of the 2007-14 period. But since that time, the situation has begun to change. The California Solar Initiative subsidies ended in 2013, and the cost of solar PV panels has dropped significantly in the last 18 months. With current incentives for residential solar PV, including the benefits of accelerated depreciation on third-party-owned systems, which now account for over two-thirds of new residential installations, a far larger set of customers is benefiting than at the end of the sample studied here.

Considering the full cost, net present value calculations suggest that residential solar PV remains a fairly expensive source of electricity. That may become more important in California, as the tax credit is scheduled to decrease to 10 percent for businesses and to zero for individuals at the end of 2016. Increasing-block prices in California already have been reduced, with the highest tier now about double the lowest, rather than about triple, as it averaged between 2007 and 2014. Proposed changes by the California Public Utilities Commission would compress the tiers further. Borenstein says his analysis demonstrates that electricity rate design has played a major role in creating incentives for residential solar adoption and in how those incentives are distributed across households of different incomes. He notes that the differentials he documents would have been largely absent under a flat rate structure.

Incentives for installing residential solar are not the only way government has attempted to promote residential "clean energy" investments. In a systematic assessment of federal income tax incentives, The Distributional Effects of U.S. Clean Energy Tax Credits (NBER Working Paper No. 21437), Borenstein and Lucas W. Davis find that on a national level, taxpayers in the top income quintile have received the majority of all such tax credits.

Based on comparisons to previous work on the distributional consequences of pricing greenhouse gas emissions, the authors conclude that tax credits are likely to be much less attractive on distributional grounds than market mechanisms to reduce the gases.

The authors also identify horizontal inequities in these programs, situations in which otherwise similar households are affected in different ways. These tax credits are non-refundable, so millions of mostly lower-income taxpayers are ineligible because they have no tax liability. From an efficiency perspective, there is nothing fundamentally different between filers with and without tax liability and from a distributional perspective this reduces both horizontal and vertical equity.