Long-Term Benefits of Experience in a Youth Employment Program 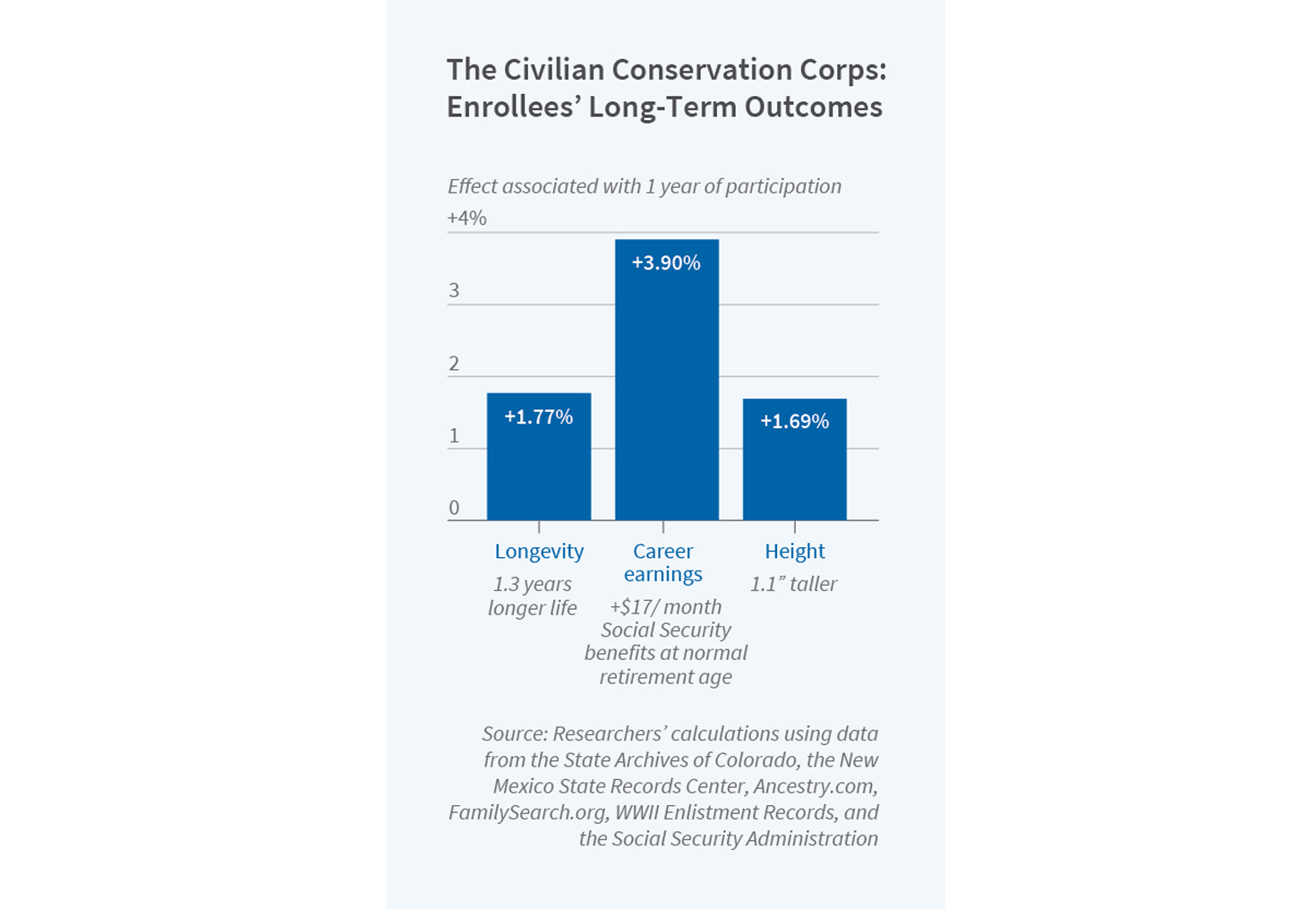 Disadvantaged youths who participated in government-run Civilian Conservation Corps activities between 1937 and 1942 lived longer and earned more than their Depression-era peers.

Most government-run job training program evaluations focus on short- and medium-term outcomes. In Do Youth Employment Programs Work? Evidence from the New Deal (NBER Working Paper 27103), Anna Aizer, Shari Eli, Adriana Lleras-Muney, and Keyoung Lee show that just under 10 months’ enrollment in the Depression-era Civilian Conservation Corps (CCC) increased lifetime earnings for disadvantaged young men by an average of 4.6 percent, even though it had no measurable effect on short-run labor market activity. It also improved long-term health and survival.

Between 1933 and 1942, the CCC employed about 3 million people in 2,600 camps. Created to address high youth unemployment rates by providing “relief through work,” its laborers contributed to public works projects such as developing national parks, preserving forests, and constructing land irrigation systems. CCC enrollees were unemployed and unmarried men without criminal records, who were American citizens aged 17 to 25 and in good health.

After completing six months of training in camps, CCC enrollees could reenlist for another three six-month periods. Participants were paid $30 per month and were required to send $25 to a designated family member. Enrollees were posted to camps of about 200 people, where they received meals and medical treatment such as vaccinations. According to CCC records, 8 percent of the enrolled men received additional schooling at the camps. Such schooling was mandatory for illiterate men but was voluntary for others.

The data were constructed using CCC administrative records in the state archives of Colorado and New Mexico. The records include information on 28,343 men who enrolled in the CCC between 1937 and 1942, including dates of birth, family information, enrollment data, camp assignment, reason for separation from the program, and some physical data. Sixty-two percent of enrollees dropped out before the end of their contracts. Of those, 21 percent deserted, 12 percent left for a job, and 12 percent left for family reasons.

For those who lived to age 45, an additional year of training increased the age at death by one year. Life expectancy for this group was 73.6 years. Short-term employment results for the 4,000 men who participated in the CCC before 1940 and could be matched to the 1940 census showed that although training increased geographic mobility by about 15 percent, it had a negligible effect on earnings and weeks worked. Individuals who trained longer were not taller at the time of enlistment. But for the 5,500 men who could be matched to World War II enlistment records, a year of CCC training was associated with an additional inch in height, an indicator of better health.

Do Youth Employment Programs Work? Evidence from the New Deal