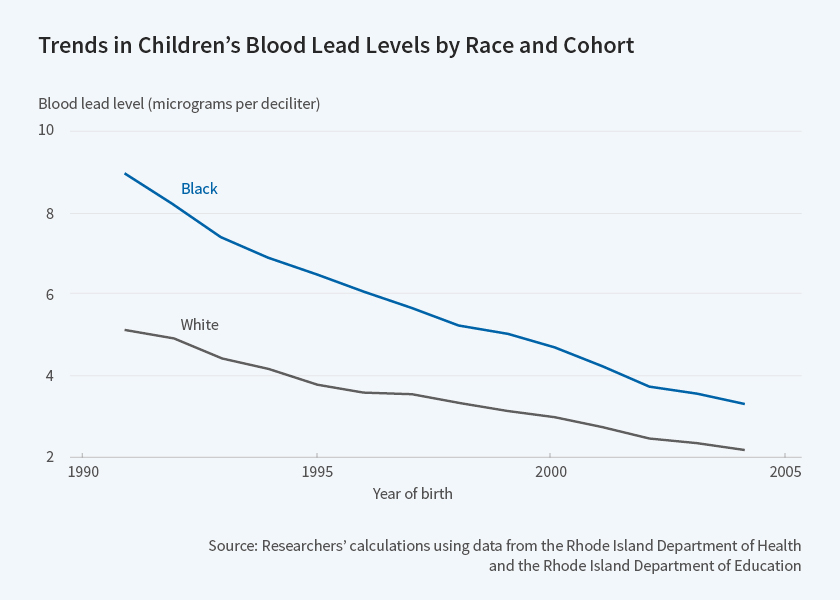 The use of lead in gasoline, paint, and other products has been sharply restricted since the 1970s as part of a national effort to reduce the incidence of neurological and other medical problems associated with lead ingestion, particularly by children. In Lead and Juvenile Delinquency: New Evidence from Linked Birth, School, and Juvenile Detention Records (NBER Working Paper 23392), Anna Aizer and Janet Currie analyze a particularly rich dataset on lead levels in the blood of 120,000 children born 1990-2004 in Rhode Island. They find a strong link between childhood lead exposure and anti-social behavior in individual-level data. Higher lead levels are associated with higher school suspension and juvenile detention rates, as well as higher incarceration rates later in life.

Lead mimics calcium in the body and interferes with all systems that require calcium to function effectively, including the central nervous system. It impairs brain development and disrupts neurotransmitter functions in ways that impact cognition, attention, and memory. Children are far more susceptible to the damaging effects of lead exposure than adults.

Although lead in household paints was banned in 1978 and phased out of gasoline between 1976 and 1986, lead levels remain high in some older homes and in roadside soil contaminated years ago by lead-emitting vehicles. The regulatory bans on lead use have resulted in decreased childhood exposure to lead, and some scholars argue that the drop in crime rates in recent decades is partly explained by declining lead exposure. But because lead exposure is often associated with other challenging childhood circumstances, the links between lead exposure in children and later criminal behavior patterns has remained subject to debate.

The researchers provide more compelling evidence by focusing on behavior earlier in children's lives, in particular on school disciplinary problems, which may be potential indicators of future anti-social behavior and incarcerations. They examine data from Rhode Island, which has a record of aggressively measuring and monitoring blood lead levels (BLLs). The state subjects children to multiple BLL tests and tests children at rates that are well above the national average. The researchers combine data from Rhode Island's health, education, juvenile detention, and corrections agencies. They also analyze data collected during medical examinations of individuals living near heavily trafficked streets where gasoline-lead emissions and contamination of roadside soil were high. This allows them to measure variations in exposure within neighborhoods.

By comparing multiple measures of BLL for the same children, the researchers conclude that one-time measurements of BLL can lead to substantial error in measuring lead exposure. After applying econometric techniques that correct for such errors, they find that a microgram per deciliter increase in lead increased the probability of suspension from school by about 6.5 percent for boys and by between 6.4 and 9.3 percent for girls. They found a positive effect of BLL on the incarceration rate for boys; although they could reject the null hypothesis of a zero effect, the estimates ranged between a 27 and 74 percent increase per 1 `(mug)/(dl)` increase in BLL.

The researchers conclude that their "results support the hypothesis that reductions in blood lead levels may indeed have been responsible for a significant part of the observed decrease in anti-social behavior among youths and young adults in recent decades."