Brexit Uncertainty Is Taking a Toll on the British Economy 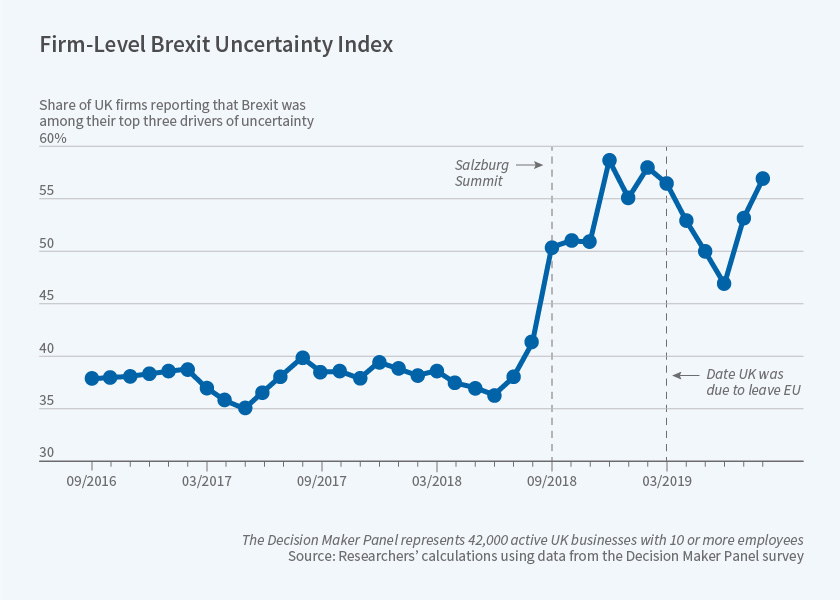 Uncertainty is associated with reduced investment and lower productivity, with particularly large effects at highly productive firms most exposed to EU trade.

While the outcome of Brexit negotiations is still unclear, the three-year lead-up to the scheduled withdrawal of Britain from the European Union has already damaged the United Kingdom’s economy through increased uncertainty. This has reduced investment by British firms by about 11 percent, and lowered productivity by between 2 to 5 percent, according to Nicholas Bloom, Philip Bunn, Scarlet Chen, Paul Mizen, Pawel Smietanka, and Gregory Thwaites in their new study, The Impact of Brexit on UK Firms (NBER Working Paper 26218).

“The vast majority of ‘uncertainty shocks’ throughout history — the 1973 OPEC oil price shock, Gulf Wars I or II, the 9/11 attacks, the collapse of Lehman Brothers, etc. — generate a surge in uncertainty that subsides reasonably quickly as markets participants’ initial fears are allayed by further information becoming available,” the researchers write. “Brexit is unusual in that it generated persistent uncertainty — three years after the original vote, the UK had not left the EU, there was still no clarity on the eventual outcome, and our survey results show that there was substantial unresolved uncertainty.”

Using several years of data from the Decision Maker Panel (DMP), a survey which includes 5,900 United Kingdom firms employing about 14 percent of the nation’s private-sector workers, the researchers find that almost 40 percent of firms consistently rank Brexit as one of the three most important sources of uncertainty. This percentage has increased over time. By comparison, other measures of uncertainty, such as stock market volatility, rose after the 2016 Brexit referendum but receded a few weeks later.

After the Brexit vote in 2016, British firms’ investment initially didn’t plunge as much as some had predicted. Instead, it fell gradually: significantly in the first year, especially for those companies most exposed to trade with the EU, less the second year, and then more the third year as the date of the separation approached.

“The huge uncertainty surrounding the process and its persistent nature may have led firms to act cautiously and not cut investment as quickly as might have been expected,” the researchers write. They note that some previous research suggests that high and persistent uncertainty can actually slow firms’ response to a shock.

One reason for the productivity slowdown may be that top management was spending time on Brexit preparations. In the period from November 2018 to January 2019, the DMP survey found that 10 percent of chief financial officers and 6 percent of chief executive officers were spending at least 6 hours a week on how to cope with Brexit; more than 70 percent said they spent some time every week on it. Other factors, such as slowing investment in R&D, software, and training, and fewer skilled foreign employees, may also contribute to the productivity slowdown.

The Impact of Brexit on UK Firms