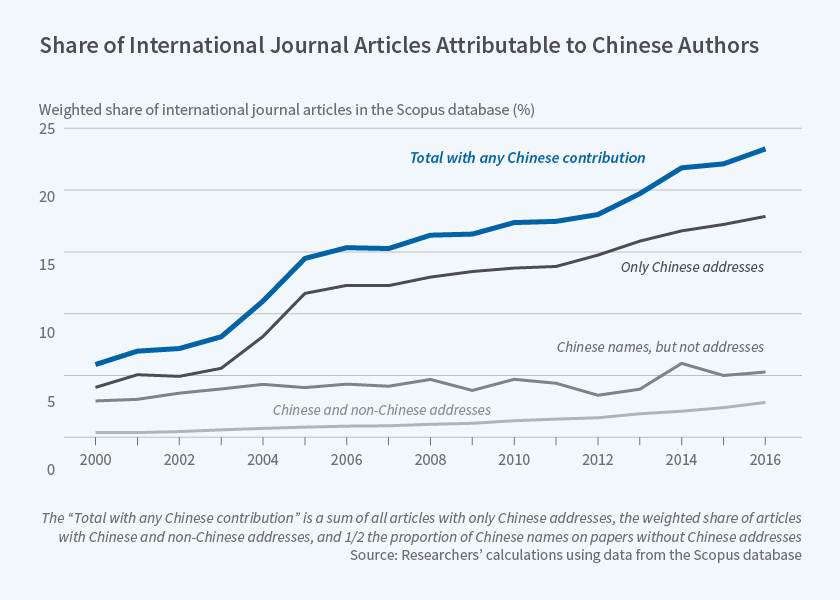 The number of papers Chinese scholars are publishing in scientific journals today may be four to five times greater than it was in the year 2000.

Between 2000 and 2016, the number of papers in scientific journals in the physical sciences, engineering, and mathematics by Chinese researchers increased dramatically. In 2000, China's share of papers in Scopus, a bibliometric database, was only 4 percent; by 2016, it was 18.6 percent, higher than the United States' share.

In Bigger Than You Thought: China's Contribution to Scientific Papers (NBER Working Paper No. 24829), Qingnan Xie and Richard B. Freeman suggest that this metric likely understates the extent of China's growing influence in the research sphere because it does not encompass papers written by Chinese researchers outside the country and ignores publications in most Chinese-language journals. To assess the full nature of the Chinese research sector's transformation, these researchers construct and analyze several alternate measures of the country's scientific contributions.

Quantity, of course, does not equal quality, so the researchers also attempt to assess the impact of Chinese scholarship by analyzing citations of papers. They find that, between 2000 and 2013, the country's share of global citations increased from 7.4 percent to 19.5 percent. Chinese researchers are also publishing at higher rates than in 2000 in two prominent and prestigious journals, Nature and Science. In 2016, 20 percent of authors in these two journals had Chinese names, and nearly 9 percent of authors had addresses in China.

The study attributes the dramatic increase in Chinese researchers' influence to significant government investment in research and development between 2000 and 2016. The authors note that China increased its R&D spending tenfold in constant purchasing power parity terms. China's R&D spending now exceeds EU spending and is approaching that in the United States. Largely as a result of this investment, the number of faculty members in China doubled between 2000 and 2016, and the number of researchers tripled.

The authors conclude that "[t]he way China deploys its newly developed scientific resources will help drive the direction of science and technology into the foreseeable future; and given the role of scientific and engineering knowledge in modern economies and society, give the country a huge role in developing the global knowledge-based economy."

Bigger Than You Thought: China's Contribution to Scientific Publications