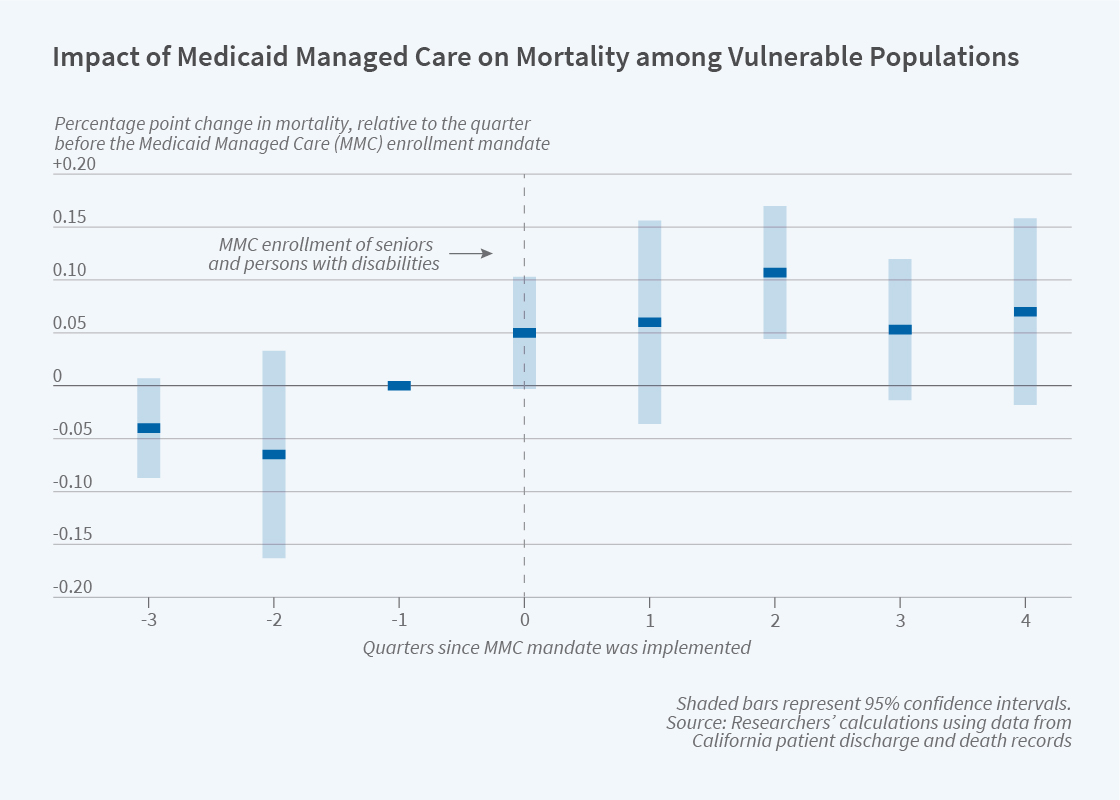 In 2016, 80 percent of Medicaid enrollees received their insurance through private managed care plans. These private plans take responsibility for providing medical care for Medicaid recipients in exchange for a fixed per-enrollee payment from the state.

These arrangements could restrain Medicaid spending if private firms had a greater incentive to control costs than the government does. However, such cost savings could have implications for patient health. Outcomes could improve, for example, if spending reductions are due to better preventive care. Alternatively, health could suffer if the cost savings reflect lower quality of care or reduced access to necessary care. Furthermore, the health consequences are not necessarily homogeneous; they could vary across different populations of Medicaid recipients.

In Heterogeneity in the Impact of Privatizing Social Health Insurance: Evidence from California’s Medicaid Program (NBER Working Paper 28944), Mark Duggan, Craig Garthwaite, and Adelina Yanyue Wang examine the impact of a Medicaid managed care (MMC) mandate for a particularly vulnerable population of Medicaid recipients: senior citizens and people with disabilities. The researchers study a policy change in California that required 240,000 of these Medicaid enrollees — who were previously exempt from such mandates — to enroll in MMC programs in 2011 and 2012.

Mandated MMC enrollment was staggered based on birth month, beginning with Medicaid recipients with May birthdays and ending with those with April birthdays. The researchers leverage this person-specific variation in the timing of the requirement to understand the impact of MMC enrollment.

They analyze administrative data on hospital discharges and emergency room visits in California between 2009 and 2013, linked to death records from 2009 through 2013. The analysis focuses on Medicaid recipients who were under the age of 65 and had at least one hospitalization or emergency department (ED) visit covered by Medicaid during a baseline period.

After the requirement to enroll in managed care took effect, Medicaid recipients were more likely to visit an ED. These additional visits were disproportionately for purposes that could be affected by reduced access to routine care, such as psychiatric care and treatment of conditions that are considered preventable or nonemergent. The additional ED visits were concentrated among enrollees with worse initial health status, as measured by the severity of underlying conditions and by baseline usage of hospital services.

MMC enrollment was also associated with a 0.09 percentage point (12 percent) increase in mortality for the affected Medicaid recipients. As seen in the figure, mortality rates shifted upwards in the years after a patient was required to enroll in MMC. As with the increased ED visits, the rise in mortality was driven entirely by increased mortality among recipients with worse underlying health.

These findings suggest that the health consequences of MMC vary substantially with health status. While MMC enrollment is not detrimental to the health of relatively healthy patients, some sicker patients may suffer serious health consequences. In light of this heterogeneity, the researchers caution against assuming that estimates of MMC effects that are derived from one population of Medicaid recipients are applicable to other populations.