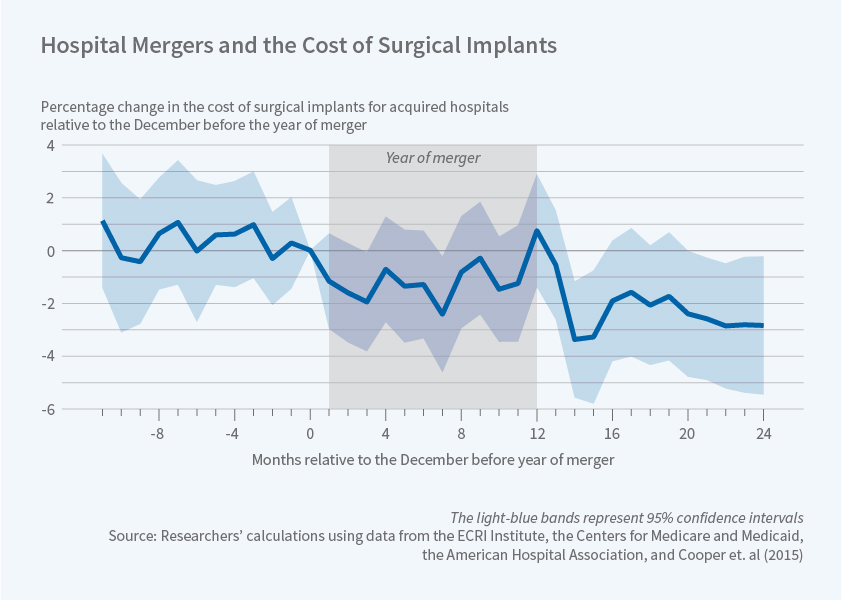 There is no evidence of cost saving by acquiring hospitals; costs at merger targets decline about 1.5 percent.

Most hospitals are part of integrated health systems that encompass multiple facilities. These systems are often the result of horizontal mergers in which one hospital acquires another. Reduced care costs and improved care quality are often invoked to justify such mergers.

In Mergers and Marginal Costs: New Evidence on Hospital Buyer Power (NBER Working Paper No. 24926), Stuart Craig, Matthew Grennan, and Ashley Swanson study hospital purchases of medical supplies before and after horizontal consolidations to test whether mergers influence the prices hospitals pay for various inputs. They find that "target" hospitals, those that are acquired in a merger, save 1.5 percent on purchases post-consolidation, but "acquirer" hospitals see minimal effects.

The researchers analyze a dataset of hospital purchases from 2009–2015, comparing supplies bought in hospitals that were either targets or acquirers to hospitals that were not part of an acquisition. The product markets in their data account for 23 percent of hospital operating costs. They classify products into three groups: physician-preference items (PPIs), which are brand-name products used in advanced procedures such as cardiac surgery; commodities, which have broad use within a hospital setting; and other surgical items, which are used in invasive procedures but may not carry the brand loyalty of PPIs.

Hospitals may purchase goods directly from vendors or rely on purchasing organizations which aggregate orders to negotiate purchases of large numbers of goods, often depending on the product category. Merging parties often cite the wide variation in prices paid across hospitals and argue that consolidation of hospitals could reduce marginal costs if the integrated system adopts the most efficient practices of each entity or negotiates discounts on behalf of the entire system. This variation is indeed large, with a coefficient of variation of 0.26 for the average product category for the same brand-month.

For target hospitals, the researchers find no significant effects of consolidation on prices of commodities or other surgical items, but a 2.6 percent reduction in prices of PPIs. These savings are due to within-brand rather than across-brand price decreases, suggesting that the consolidation led to more efficient bargaining rather than to brand-switching. For acquirer hospitals, the price of commodities decreased by 6.4 percent, other surgical products saw no effect, and PPI prices increased by 1.1 percent. Taken together, these effects imply a 1.5 percent reduction in the prices paid by target hospitals, or approximately 10 percent of the ex ante potential savings suggested by the Gini coefficients. For acquirers, the increase in PPI spending offsets the savings on commodities.

The researchers categorize acquirer hospital systems by their size, designating small systems as those with fewer than four hospitals, and large systems as those with four or more facilities. They find that, holding brand choices fixed, target hospitals' savings on PPIs are similar for transactions with small and large acquirers, suggesting that any merger efficiencies are not strictly increasing with firm size. For acquirers, within-brand commodity savings are larger for small acquirers than for large ones.