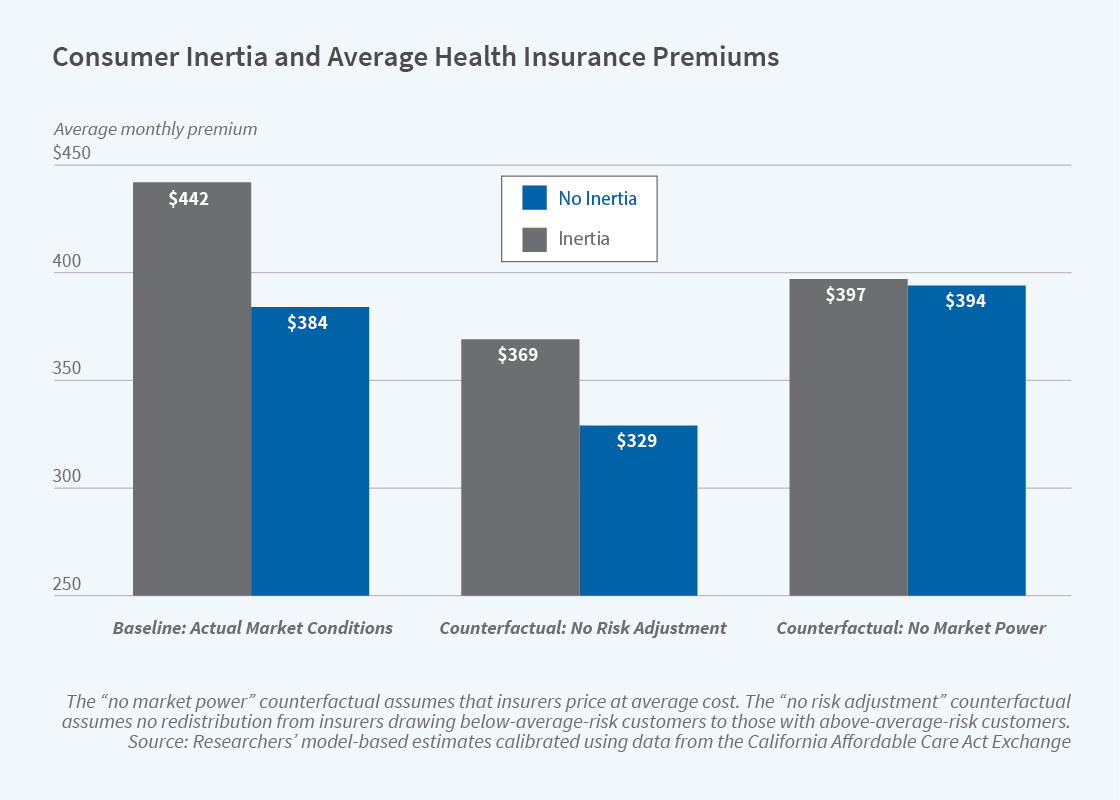 If consumers in California’s ACA exchange fully optimized their policy choices each year, average monthly premiums would be $58 lower.

Many US markets for health insurance rely on managed competition: consumers choose freely among private insurers while regulations mandate minimum benefits and limit insurers’ incentives to screen consumers by risk. Anything that impedes consumers’ ability to choose high-quality plans, so-called “frictions,” may undermine the efficiency of these markets.

In Inertia, Market Power, and Adverse Selection in Health Insurance: Evidence from the ACA Exchanges (NBER Working Paper 29097), Evan Saltzman, Ashley Swanson, and Daniel Polsky examine the equilibrium impact of inertia — consumers’ tendency to stick with the same plan from year to year even when premiums change and better options arise — on the efficiency of California’s Affordable Care Act (ACA) exchange, given the features that manage competition in this market.

The researchers analyze consumer-level enrollment data from California’s ACA exchange from 2014 through 2018. Consumers choose between ACA insurance plans standardized into four tiers of increasing generosity, labeled bronze, silver, gold, and platinum. There is substantial churn from year to year in the set of consumers who are eligible to purchase insurance on the exchange. Consumers who remain eligible and stay insured in two consecutive years make notably persistent choices: about 79 percent choose the same plan, 91 percent choose a plan from the same tier, and 87 percent choose a plan from the same insurer as in the previous year. The degree of inertia can be estimated by comparing the active enrollment choices among those who are newly insured on the exchange, and the choices of those who were insured on the exchange in the previous year. The high degree of inertia is costly to consumers, who on average forego up to $2,324 in annual surplus by remaining in their previous plan rather than making a new, and optimizing, choice.

To model the ACA market, the researchers assume that oligopolistic insurers set premiums to maximize their expected profit, while consumers, presented with a menu of policies, choose plans to maximize their utility. When insurers know that their buyers are slow to react to premium changes or other changes in market conditions, they have greater latitude to charge high prices.

Under their assumptions about market structure and the way insurers respond to inertia, the researchers estimate that eliminating inertia would decrease premiums by 13.2 percent. If they made optimal choices each year, consumers would experience large welfare gains. Some enrollees would exit the exchange, while others would shift to less costly or higher quality plans within or across the tiers. The average per capita welfare gain would be $902. That combines the gain to exchange participants from selecting higher-value plans, and the savings to taxpayers from reduced ACA premium subsidies.

Two key features of the ACA exchange, risk adjustment and imperfect competition, have an important effect on the potential gains to eliminating inertia. Risk adjustment is a requirement that firms with lower-risk consumer pools must transfer money to those with higher-risk pools. Without risk adjustment, there would be a stronger positive relationship between plan generosity and premiums. The market for high-coverage insurance could unravel, and eliminating inertia could exacerbate this risk as consumers become more attentive to their premium and risk status. The researchers find only limited support for this possibility. Even without risk adjustment, they estimate that removing inertia would generate a per capita welfare gain of $658, with a premium decline of 10.9 percent.