Hospital Prices and Health Spending Among the Privately Insured 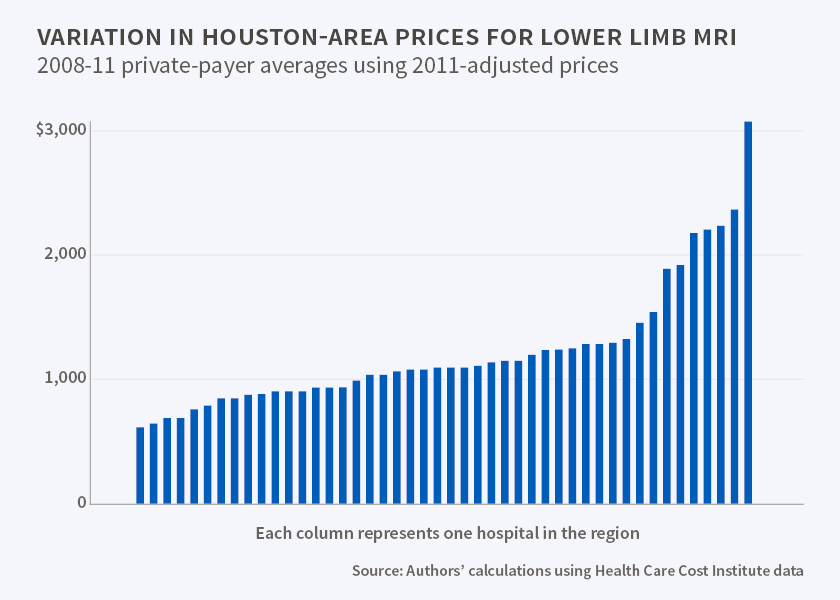 Hospital prices are positively associated with hospital market power; in monopoly markets they are 15.3 percent higher than in markets with four or more hospitals.

The cost of an MRI of the lower limbs varies by a factor of 12 between the most and least expensive hospitals in the United States for patients who are covered by employer-sponsored health insurance. Similar disparities are observed for many other standard procedures. For patients covered by Medicare, under which prices are regulated by the federal government, the price disparities are much smaller, and the range of prices typically varies by less than a factor of three.

These are among the findings in The Price Ain't Right? Hospital Prices and Health Spending on the Privately Insured (NBER Working Paper 21815) by Zack Cooper, Stuart Craig, Martin Gaynor, and John Van Reenen, a study that examines the prices hospitals negotiate with private insurance companies. After comparing pricing in the private and public sectors, the researchers caution against drawing lessons from Medicare spending data in formulating policies to rein in health care costs among the privately insured.

Many previous studies of health care costs have relied on Medicare payments to hospitals to compare costs in different locations and across providers. While government reimbursement rates are public, the prices hospitals negotiate with private insurers have usually been treated as commercial secrets and are not generally available to researchers. Medicare covers 16 percent of the population, roughly 50 million individuals, while over 60 percent of the population (nearly 190 million people) are covered by private health insurance. This study analyzes newly available data on private health insurance expenditures for 88 million Americans covered by three of the five largest U.S. insurance companies.

The researchers find that hospitals negotiate higher prices when they face less competition: Those with monopoly power charge an average of 15 percent more than those in areas with four or more hospitals. Looking across geographical areas in the U.S., they find that per-patient spending by Medicare is not highly correlated with per-patient spending by private insurers. For example, three cities that have been widely cited by policymakers and in the press for their low per-capita Medicare spending, Grand Junction, CO, Rochester, MN, and La Crosse, WI, have among the highest per-capita private health insurance spending.

One of the study's key findings is that while variation in the quantity of care provided is a key source of the geographical variation in Medicare spending, variation in the price of particular services is a much larger factor in explaining geographic differences in private health insurance spending.

The study draws data from insurance claims paid between 2007 and 2011 by employer-sponsored plans issued by Aetna, Humana and UnitedHealthcare. The database, assembled by the Health Care Cost Institute, includes all 50 states. The study controlled for a number of other factors that could affect pricing, such as for-profit status, the presence of high-tech equipment, labor costs, hospital size, regional demographics and percentage of Medicare and Medicaid patients.

Average overall health care spending per privately insured individual in 2011 varied by a factor of three across locations, from $1,700 in Honolulu to $5,500 in Napa, CA. The researchers find much larger variations, a factor of eight nationwide, in the negotiated prices for seven standard procedures, including hip and knee replacements, cesarean sections, and diagnostic colonoscopies.

Medicare reimbursement rates are substantially below those of private insurance plans. If "private prices were set 20 percent higher than Medicare rates, inpatient spending on the privately insured would decrease by 17.4 percent," the researchers calculate.

The Price Ain’t Right? Hospital Prices and Health Spending on the Privately Insured