Trends and Cycles in the Macroeconomy in China 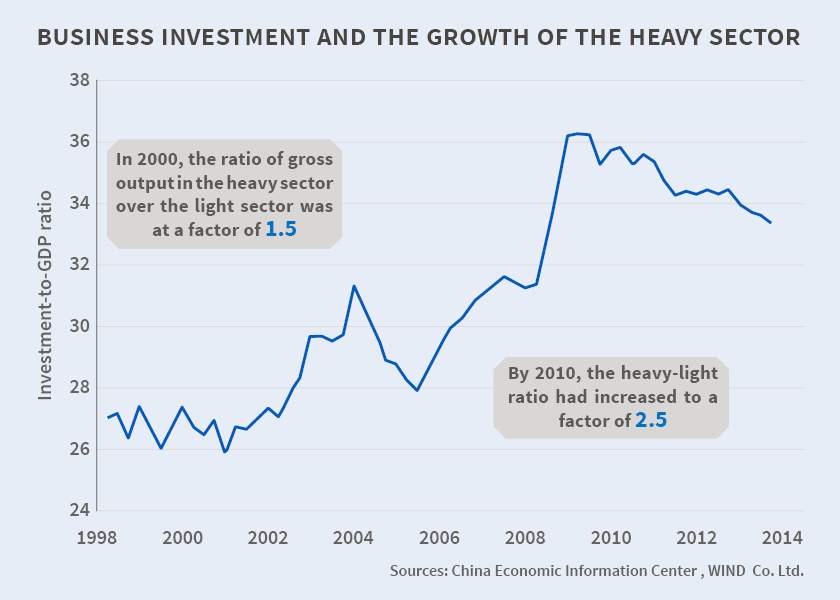 Between 1997 and 2010, China's industries steadily increased their capital investment even though the investment-to-output ratio was increasing and labor's share of income was trending down. While traditional two-sector models of the Chinese economy are hard pressed to explain these phenomena, a variant that divides the economy into "heavy" and "light" sectors, rather than the traditional state-owned and privately owned sectors, can explain these patterns as well as other macroeconomic regularities, according to Trends and Cycles in China's Macroeconomy (NBER Working Paper 21244). Government policies that encouraged loans to capital-intensive industries are a key part of the explanation.

"We argue that preferential credit policy for promoting heavy industries accounts for the unusual cyclical patterns as well as the post-1990s economic transition featured by the persistently rising investment rate, the declining labor income share, and a growing foreign surplus," write authors Chun Chang, Kaiji Chen, Daniel F. Waggoner, and Tao Zha. Their study collects and analyzes new Chinese data. The authors have created annual and quarterly macroeconomic time series that they say are as consistent as possible with U.S. time series. These data highlight ways in which China's transition to a developed economy differed from the experience in the West.

The authors' novel division of the economy into heavy and light sectors is based on the decision by the Eighth National People's Congress in the late 1990s to strengthen heavy industries for 15 years. Telecommunications, energy, metal products, and other heavy sectors were given priority for long-term bank loans. The authors include a collateral constraint in their model, and they argue that preferential access to capital enabled the heavy sector to borrow more, and increase its capital investment, even though the returns from that investment were declining. This accounts for the rising share of the heavy sector in aggregate value-added, the increasing investment rate, and the declining labor income share.

"Our theory contributes to the emerging literature on the role of financial market imperfections in economic development," the authors conclude. "Our theoretical framework sheds light on a potential cause of the twin first-order problems facing China's macroeconomy today: (a) low consumption and income growth and (b) overcapacity of heavy industries with rising debt risks. How to resolve these problems might have profound policy implications."

Trends and Cycles in China's Macroeconomy