How Much Wealth Is Stashed in Tax Havens? 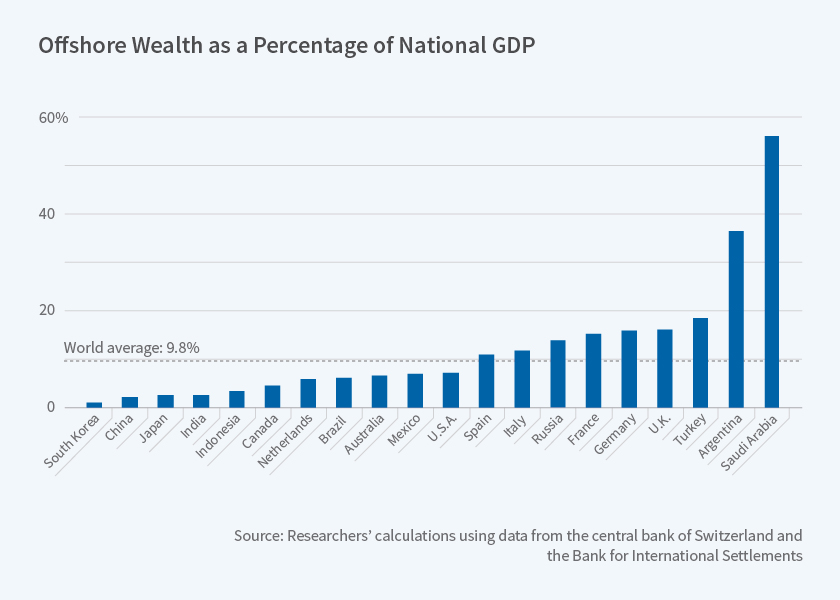 New estimates based on data from the Bank for International Settlements suggest countries vary widely in the share of wealth held offshore.

Offshore tax havens in exotic locales have been the subject of Hollywood movies and best-selling novels. But data on the importance of tax havens, and the amount of wealth held in them, is elusive.

In Who Owns the Wealth in Tax Havens? Macro Evidence and Implications for Global Inequality (NBER Working Paper No. 23805), Annette Alstadsæter, Niels Johannesen, and Gabriel Zucman make country-by-country estimates of tax haven wealth holdings. They estimate that wealth worth about 10 percent of global GDP is held offshore.

There is substantial variation across nations in the share of their citizens’ wealth that is held in tax havens. Scandinavians hold only a few percent of GDP offshore wealth, but that number rises to about 15 percent for continental Europe as a whole, and to almost 60 percent in some Persian Gulf countries and some Latin American nations.

The researchers analyze recently released offshore bank deposit information from the Bank for International Settlements, including breakdowns of deposits by individual countries. The data were first reported in the early 2000s. The researchers estimate total wealth, including bond and equity holdings, held in shell companies and other accounts set up in tax havens. For 2007, the researchers estimate that $5.6 trillion was held in tax havens. They note that this estimate is conservative, since it does not include assets such as art collections, gold, and real estate holdings.

The volume of offshore wealth is not easily explained by tax rates or political factors within individual countries. Some of the nations with the lowest shares of offshore assets are high-tax countries, such as Denmark and Norway, while others are low-tax nations, such as South Korea and Japan. Nations with large shares of offshore assets include autocracies, such as Saudi Arabia and Russia, countries with a recent history of autocratic rule, such as Argentina and Greece, as well as long-established democracies, including the United Kingdom and France.

The researchers explore the implications of tax haven wealth for measuring wealth inequality. When assets held in tax havens are included, not surprisingly, wealth inequality is greater than when it is estimated from data reported on tax returns. Because offshore wealth is very concentrated at the top, accounting for it increases the wealth share of the 0.01 percent highest net worth households in Europe substantially, even in countries whose citizens do not use tax havens extensively. Including offshore assets has dramatic implications in Russia, where the majority of wealth at the top is held outside of the country. In the United States, offshore wealth also increases inequality, but the effect is more muted than in Europe.

Who Owns the Wealth in Tax Havens? Macro Evidence and Implications for Global Inequality