Shifting Employment and Earnings, and US Earnings Inequality 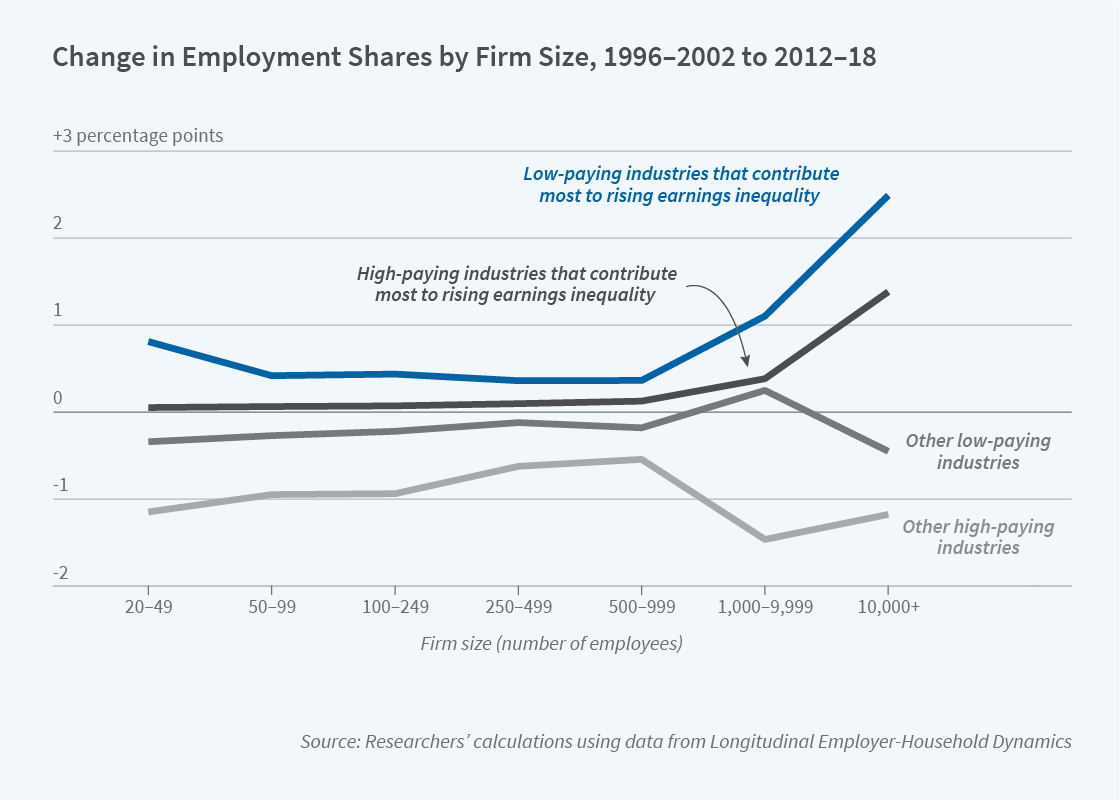 Most of the growth in earnings inequality in the United States over the last several decades can be explained by employment growth and changes in earnings differentials in about 10 percent of all industries, at both the top and bottom of the earnings distribution, rather than by rising inequality of earnings within firms or between firms within industries. Many of these industries, which include software publishing, a high-earnings industry, and restaurants, a low-earnings one, are increasingly characterized by the presence of very large firms.

These are the central findings of John C. Haltiwanger, Henry R. Hyatt, and James Spletzer in Industries, Mega Firms, and Increasing Inequality (NBER Working Paper 29920). The researchers analyze administrative data for workers aged 20 to 60 during the years 1996 to 2018. Their sample includes earnings of 758 million worker-years. They consider only individuals with annual real earnings above $3,770 in 2013 dollars, roughly 13 weeks of employment at an hourly wage of $7.25.

Changes in the share of the workforce employed in different industries and changing earnings differentials across these industries have been key drivers of rising earnings inequality.

Most employers in the United States are subject to state unemployment laws and must provide states with wage records on every employee in the firm. Eighteen states that have data available from 1996 on are used in the analysis, representing roughly 44 percent of national employment. The underlying wage and employer data stem from the Longitudinal Employer-Household Dynamics (LEHD) partnership with states at the US Census Bureau. Integration of the employee wage records and employer data yields the LEHD data infrastructure that includes information about an employee’s earnings, age, gender, and education, as well as details about the employing firm’s size, age, industry, and location.

The researchers focus on the variance of the natural logarithm of real annual earnings as their key measure of earnings dispersion. It rose from a value of 0.794 in the 1996–2002 period to 0.915 in 2012–18. They decompose this increase into constituent parts, and find that 61.9 percent was due to increased earnings dispersion between industries. Only 14.9 percent was due to rising variation within firms. Differences between firms in the same industry accounted for just 23.1 percent. The researchers aggregated firms into 301 industries using the 4-digit North American Industry Classification System.

About 10 percent of the industries — 30 of the 301 — accounted for 98.1 percent of between-industry earnings variance growth. These industries accounted for 39.3 percent of total employment, and their employment share increased by 8.2 percentage points over the sample period. The five industries contributing the most to increasing earnings dispersion were Restaurants and Other Eating Places, Other General Merchandise Stores, Software Publishers, Computer Systems Design, and Other Information Services.

Among these 30 industries, 19 are high paying, and 11 are low paying. Earnings rose substantially in the 19 high-paying industries. In more than half of them, the skill intensity of science, technology, engineering, and mathematics workers was more than five times the average for all industries. The increasing pay in those industries accounted for about 30 percent of the total earnings inequality increase.

At the same time, a relatively small number of low-paying industries became even lower paying, especially at the largest firms. The increase in employment in these industries was responsible for nearly three-quarters of the 8.2 percent employment gain in the group of 30 industries driving the earnings inequality growth.