Who Gets into Gifted and Talented Education Programs? 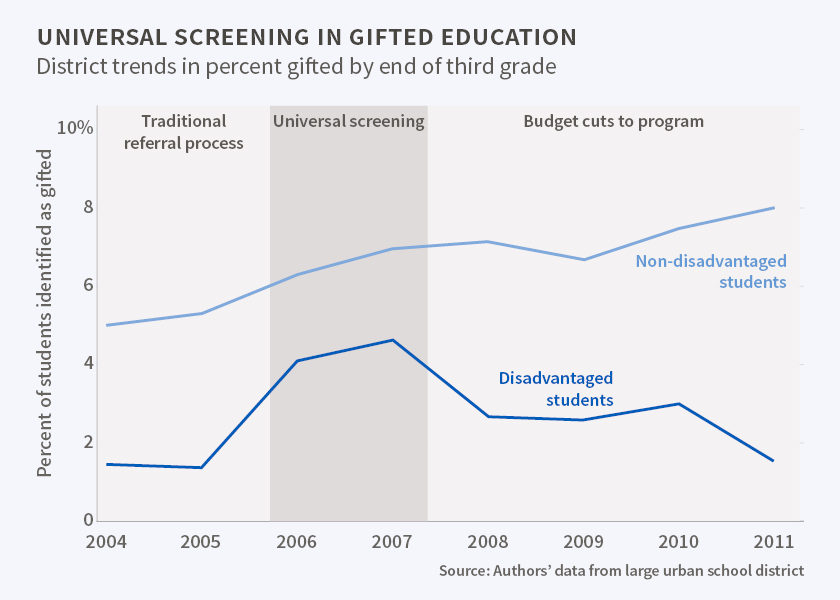 In Can Universal Screening Increase the Representation of Low Income and Minority Students in Gifted Education? (NBER Working Paper 21519), David Card and Laura Giuliano explore the experience of a school district that they describe as "one of the largest and most diverse" in the nation.

Until 2005, the district selected candidates for its elementary-level gifted and talented program from among first- and second-graders recommended by parents and teachers. This pool was then winnowed based on IQ scores and evaluation for such traits as motivation, creativity, and adaptability. While the district offered free IQ testing, private psychologists did a thriving business administering tests to more affluent students who wanted to skip the queue or try again if their initial scores fell short.

To qualify for gifted status, students generally had to score at least 130 on the IQ test. However, to offset economic and linguistic disadvantages, a lower threshold of 116 applied to students who received subsidized lunches or were designated as English language learners. Despite this effort to level the playing field, enrollment in the gifted program was skewed toward white students from higher-income families. Blacks and Hispanics made up fewer than 30 percent of the students in the program, although they accounted for 60 percent of the district's students overall.

In 2005, the district introduced a universal screening program to supplement the more informal referral process. All second-graders were given a standardized test that assessed cognitive ability through questions composed of symbols and shapes. If students scored above 130 – or above 115 for those classified as disadvantaged – they were referred to a district psychologist for free IQ testing.

In the period 2004-05, prior to implementation of universal screening, 3.3 percent of all students were identified as gifted. In 2006-07, after the program was implemented, the rate jumped to 5.5 percent. This surge occurred without any relaxation in eligibility standards. During the same time frame, no significant changes in levels of gifted students identified were reported by other, comparable school districts in the state that continued to use traditional screening methods.

Before universal screening, "black and Hispanic students, free/reduced price lunch participants, English language learners, and girls were all systematically 'under-referred' to the gifted program," the researchers find. With universal screening, the number of Hispanic students increased by 130 percent and the number of black students by 80 percent.

The newly identified students performed as well on IQ tests as students nominated under the previous system, though they had scored lower on standardized achievement tests. "We hypothesize that parents and teachers often failed to recognize the potential of many poor and immigrant children with less than stellar achievement levels, accounting for their likelihood of being under-referred," the researchers write.

Skeptics of the new screening process expressed concern that the newly identified students would flounder in the gifted program. In fact, they showed greater gains on reading and math tests than those students referred under the traditional system.

Implementing the universal system was expensive. The district conducted 1,300 additional IQ tests annually, incurring high overtime costs. In the wake of the 2007 recession, the cash-strapped district cut overtime and thus the number of free tests it administered. Enrollment in the gifted program dropped sharply. In 2011, when the district decided for budget reasons to suspend the universal screening program, the gifted participation rate among disadvantaged students fell back to pre-2005 levels.

"At a minimum," the researchers conclude, "our findings suggest that the under-representation of poor and minority students in gifted education is not due solely to the lower IQ scores of these students. A substantial share of the gap appears to be caused by the failure of the traditional parent/teacher referral system to identify high-ability disadvantaged students."

Can Universal Screening Increase the Representation of Low Income and Minority Students in Gifted Education?