Unintended Births and Fertility Trends in the US since 1991 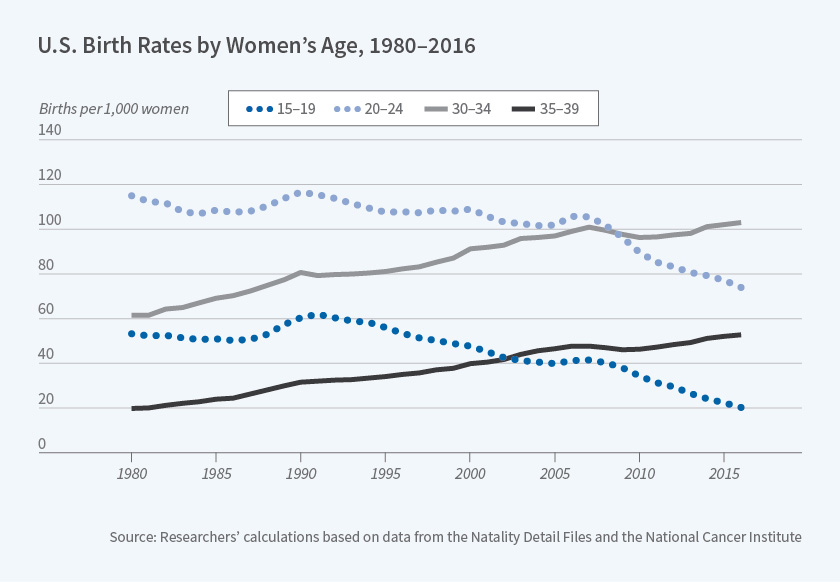 One-third of the overall decline in fertility between 2007 and 2016 is attributable to a decline in the number of unintended births.

"...[M]uch of the fertility decline of the last ten years is driven by declines among women whose births were likely to be unintended, and specifically by births to young women," they conclude in Fertility Trends in the United States, 1980–2017: The Role of Unintended Births (NBER Working Paper 25521). To investigate the role of unintended births in explaining fertility trends, the researchers develop a statistical model to predict whether a birth was unintended, using data from the National Survey of Family Growth and the National Center for Health Statistics' Natality Detail Files. The study classifies a birth as unintended if the mother reports that the child was unwanted or if she reports that she wanted to have children but not for two years or more. With this definition, unintended births peaked in 2005–06 at 35.6 percent of all births. Since then, that fraction has dropped steadily, to 29.5 percent between 2013 and 2015.

The researchers conclude that the decline in unintended births between 2007 and 2016 explains about a third of the overall drop in fertility over the period. They find that this decline is almost entirely due to changes in the age distribution of women giving birth. The researchers also examine trends in birth rates by marital status and find that the rate for unmarried women has started to decline while that for married women has increased. The drop in childbearing by unmarried women over the last decade is driven by younger cohorts: Women born in the late 1980s and early 1990s had fewer nonmarital births by age 25 than their predecessors.

Fertility Trends in the United States, 1980-2017: The Role of Unintended Births