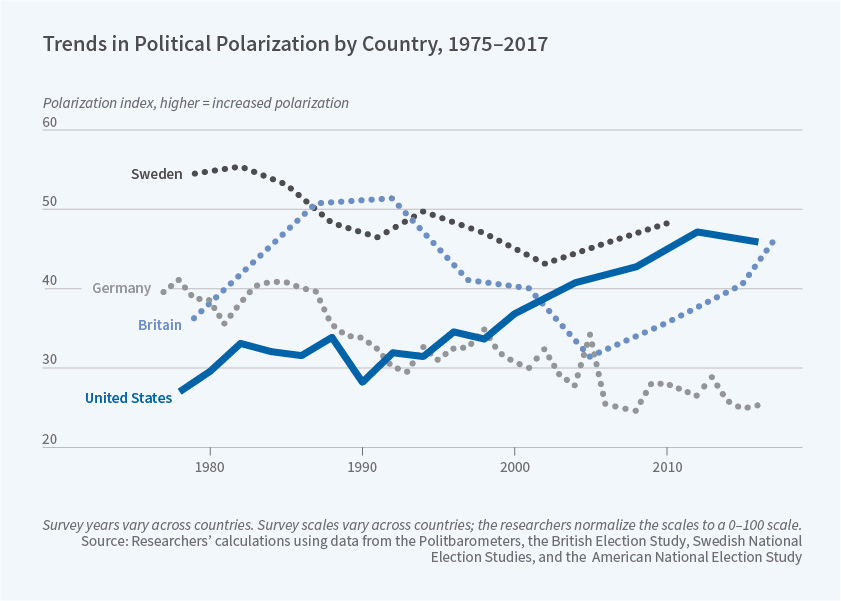 Negative feeling toward opposing political parties is up most sharply in the United States. It has also risen in Canada, Switzerland and New Zealand while falling elsewhere.

Affective polarization — people’s negative feelings toward members of opposing political parties — has been increasing in the United States, causing concern not just because of the accompanying decline in the civility of public discourse but also because high levels of polarization are associated with reduced government efficacy.

To measure affective polarization, the researchers use the gap between individuals’ self-reported feelings toward members of their own political party and members of the opposing party. Although the surveys that underlie this study differ somewhat across nations, the researchers construct a single measure for each country for each point in time, calculated on a scale of 0 to 100, that summarizes negative feelings toward members of opposing parties relative to one’s own.

The researchers find that over time, affective polarization — the extent of negative feelings toward those in the other party — has increased more in the US than in any of the other countries.

The researchers exploit cross-country comparisons to evaluate some of the explanations that have been proposed for increasing polarization in the US. They discount the spread of broadband internet access as an explanation, noting that all the countries in the sample saw increases in internet penetration during the decades studied. In fact, countries that saw polarization decline actually enjoyed a faster rise in internet penetration than other countries.

The researchers similarly see evidence against three other factors — income inequality, openness to trade, and the foreign-born share of the population — as potential drivers of trends in affective polarization. They note that all three factors increased in almost every country in the sample.

Two other popular explanations for rising polarization in the US, however, do align with the cross-country data. The first is political party sorting. In recent years, the political party that people identify with has become more correlated with both ideology and important individual attributes like race and religion. Political scientists have suggested that this party sorting — which has resulted in members of different political parties having less in common in the modern era than in years past — could increase affective polarization. Both Canada and the US have seen ideological differences between political parties increase more quickly than other countries. Increased party sorting by race, which may be driven by increases in the non-white share of the population, also appears to be important. The researchers find that “the increase in the non-white share has been twice as large in countries with rising affective polarization as in those with falling affective polarization.”

Finally, the rise of partisan cable news networks has been more pronounced in the US than in other countries and coincides with increasing polarization. “The timing of the introduction of Fox News appears roughly consistent with the acceleration of the growth in affective polarization during the 1990s, as well as with the observation that older demographic groups both consume more partisan cable news and have polarized more quickly than younger demographic groups in the US …” the researchers write. They also note that the countries in which affective polarization declined devote more per-capita resources to public media.