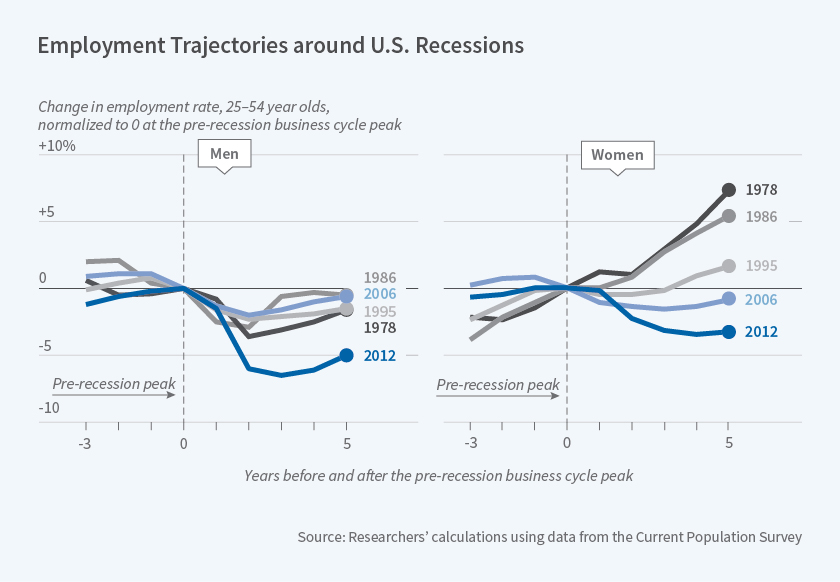 Much of the slowdown in employment growth during economic recoveries in recent decades is due to slowing growth in women's labor force participation.

Recent economic recoveries have been characterized by slow employment growth. Various explanations have been suggested for this pattern, including labor market restructuring that creates mismatches between workers and job openings, and firms using existing workers for longer hours rather than hiring new ones following a downturn.

In Women, Wealth Effects, and Slow Recoveries, (NBER Working Paper 25311), Masao Fukui, Emi Nakamura, and Jón Steinsson find that much of the slowdown in employment growth during recoveries can be traced to slower growth in female employment. A four-decade influx of women into the labor market, the "Grand Gender Convergence," saw the rate of female participation in the labor market approach that of men. The speed of this convergence peaked in the 1970s and by 2000 the gender gap had plateaued. The researchers estimate that 70 percent of the slowdown in employment growth during recoveries is due to this factor.

A central question for analyzing the impact of rising labor force activity of women is whether the addition of millions of female workers to the labor market reduced male employment rates. Standard macroeconomic models imply that such crowding out is large. The researchers observe that, to answer this question, it is important to recognize "home production," the non-market production of goods and services that households do for their own consumption. Women who are not in the labor market are often actively engaged in home production, and when they enter the labor force, their household's demand for market goods and services is likely to rise. This helps to explain why, as women have joined the labor market in large numbers, the male employment-to-population ratio has stayed relatively constant. It can also account for the findings from time-use data that women's leisure time has increased over the past 50 years. This would not be the case if women were going from an idle life of leisure into newly productive roles in the workforce.

The researchers use their estimates of crowd-out to investigate what the last half-century of business cycles would have looked like had the rapid growth in female entry into the labor market continued rather than slowed down. They find that recoveries would have been significantly faster following recent recessions.