The Effects of Uniform Pricing by US Retail Chains 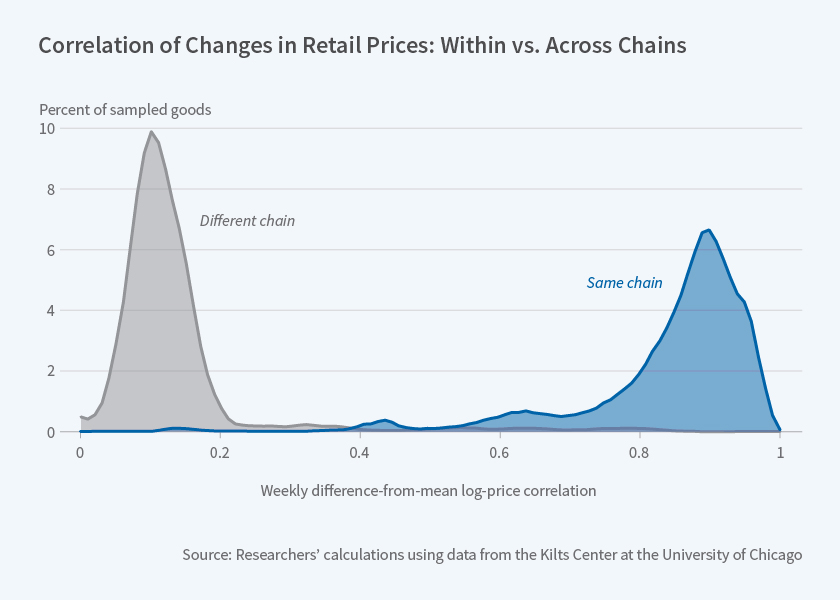 Firms may forego profits when their desire for reductions in managerial overhead leads them to abandon price discrimination.

Large U.S. retailers manage chains of standardized food, drug, or merchandise stores with multiple locations in multiple states. In Uniform Pricing in U.S. Retail Chains (NBER Working Paper No. 23996) Stefano DellaVigna and Matthew Gentzkow use scanner data to show that such retail chains charge nearly uniform prices despite wide variations in customer preferences and household incomes from place to place. They estimate that uniform pricing reduces chain profits by 7 to 9 percent compared to profits from flexible pricing predicted by a benchmark model.

The researchers consider advertising, tacit collusion, pricing fairness, and managerial overhead to explain why uniform pricing prevails. They conclude that the most promising explanation is that the practice reduces managerial overhead. As information technology improves and managements adapt to the new environment, this could imply that chains will begin to increase inter-store price variation. They note that "both drug stores and mass merchandise chains appear to have doubled the flexibility of their pricing" in 2012-14 compared to 2006-08.

The analysis is based on store-level scanner data from the Nielsen Retail Scanner and Consumer Panel from 2006-14. The dataset includes information on 9,415 food stores from 73 chains, 3,288 mass merchandise stores from five chains, and 9,977 drugstores, which typically carry a limited variety of both food and merchandise, from four chains. It contains prices for about a million unique products, along with information from about 60,000 shoppers. The researchers compared weekly average prices derived by dividing weekly revenue by the number of units sold for 10 commonly purchased items, including soup, toilet paper, and 12-pack cans of Coke. Demographic data were constructed from the 2008-12 American Community Survey and were usually based on customers' residential zip codes.

For the great majority of the 73 chains, measured prices varied little across stores. For 11 food chains and two major drugstore chains, prices varied at the level of large geographic zones. Estimates from the flexible-pricing model suggest the average chain could increase its profits by 6.9 percent if prices in the highest income areas' retail outlets were raised 18 percent in food stores, 29 percent in drugstores, and 11 percent in mass merchandise stores.

Per capita income in the sample ranged from $22,700 at store locations in the 10th percentile of the income distribution to $40,900 at stores in the 90th percentile. In general, shoppers in drug and grocery stores in areas with higher incomes face prices that are about 2 percent higher for each $10,000 of additional income; shoppers in mass merchandise stores in those areas enjoy lower prices. The researchers conclude that uniform pricing "significantly increases the prices paid by poorer households relative to the rich" because people in the lowest income decile pay about 0.7 percent higher prices than they would under flexible pricing, but consumers of stores in the top income decile pay about 9.0 percent less.

Uniform Pricing in US Retail Chains