Technology and the Geography of Foreign Exchange 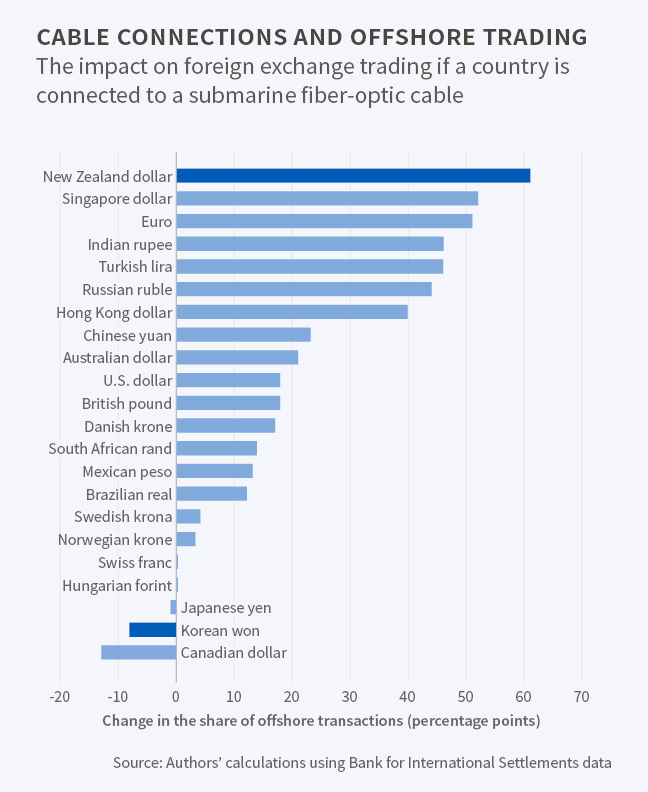 The declining cost of long-distance communication has led to a further concentration of foreign exchange trading in financial centers.

The best-selling, contrasting narratives of Thomas Friedman in The World is Flat and Michael Lewis in Flash Boys are among the prominent efforts to identify impacts of electronic technology on economic activity. In Cables, Sharks and Servers: Technology and the Geography of the Foreign Exchange Market (NBER Working Paper 21884), Barry Eichengreen, Romain Lafarguette, and Arnaud Mehl test those authors' core ideas by analyzing the effect that undersea fiber-optic cables have had on foreign exchange trading.

Under what the researchers call the "Flat World" hypothesis (after Friedman), location, distance, and other geographical factors no longer hinder far-flung currency traders. This could result in increased decentralization of trading locations. Under the alternative "Flash Boys" hypothesis (after Lewis), trading might increasingly concentrate in a few major centers because of the potential for high-frequency stock traders to profit from split-second differences in access to market data.

Drawing on data from the Bank for International Settlements (BIS), the researchers estimate how technological advances influenced the geographic location of transactions in 55 currencies between 1995 and 2013. They conclude that growth of electronic trading combined with a proliferation of underwater fiber-optic cables led to a concentration of foreign exchange transactions in major financial centers located near the sea, such as London, New York, and Tokyo. That is, the new technology has made the global foreign exchange market "flashier" rather than "flatter."

The new cables increased bandwidth, the data output for a given unit of time; they also reduced latency, the speed in milliseconds required for an order to reach a trading venue. "The reduction in latency is especially attractive to high-frequency traders seeking to exploit tiny, short-lived price discrepancies," the researchers note. These traders also benefit from lower transaction costs associated with economies of scale, such as those achieved by aggregating orders.

Over the study period, the researchers estimate that transactions taking place outside the countries where the currencies originated increased by 21 percentage points. Only nine of the 55 currencies they study were traded more actively onshore than offshore in 2013.

The researchers note that while undersea fiber-optic cables have recently given a competitive advantage to financial centers located near oceans, landlocked cities are increasingly being connected by terrestrial cables. For example, a cable was recently laid between Frankfurt and Zurich. This suggests that some cities' history and commitment to being financial centers may influence the financial geography of the future.

Cables, Sharks and Servers: Technology and the Geography of the Foreign Exchange Market