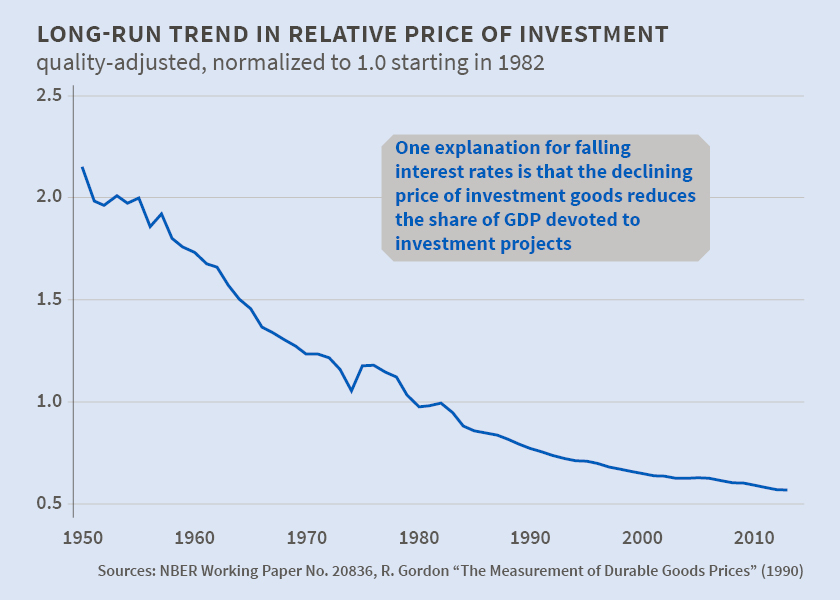 The greater the changes required by new technologies, the author reasons, the more growth may slow in the short run, but once adaptation occurs growth should accelerate.

Growth economists are divided on whether the U.S. is facing a period of "secular stagnation" - an extended period of slow economic growth in the coming decades. In Secular Stagnation: The Long View (NBER Working Paper No. 20836), Barry Eichengreen considers four factors that could contribute to a persistent period of below-potential output and slow growth: a rise in saving due to the global integration of emerging markets, a decline in the rate of population growth, an absence of attractive investment opportunities, and a drop in the relative price of investment goods. He concludes that a decline in the relative price of investment goods is the most likely contributor to an excess of saving over investment.

With regard to long-term future growth rates, a key point of debate is how to interpret, and project forward, the "Third Industrial Revolution": the computer age and the new economy it has created. Some argue that the economic impact of digital technology has largely run its course, while others maintain that we have yet to experience the full effect of computerization. In this context, Eichengreen looks at the economic consequences of the age of steam and of the age of electrification. His analysis identifies two dimensions of the economic impact: "range of applicability" and "range of adaptation."

Range of applicability refers to the number of sectors or activities to which the key innovations can be applied. Use of the steam engine of the first industrial revolution for many years was limited to the textile industry and railways, which accounted for only a relatively small fraction of economic activity. Electrification in the second industrial revolution, says Eichengreen, had a larger impact on output and productivity growth because it affected a host of manufacturing industries, many individual households, and a wide range of activities within decades of its development.

The "computer revolution" of the second half of the 20th century had a relatively limited impact on overall economic growth, Eichengreen writes, because computerization had deeply transformative effects on only a limited set of industries, including finance, wholesale and retail trade, and the production of computers themselves. This perspective suggests that the implications for output and productivity of the next wave of innovations will depend greatly on their range of applicability. Innovations such as new tools (quantum computers), materials (graphene), processes (genetic modification), robotics, and enhanced interactivity of digital devices all promise a broad range of applications.

Range of adaptation refers to how comprehensively economic activity must be reorganized before positive impacts on output and productivity occur. Eichengreen reasons that the greater the required range of adaptation, the higher the likelihood that growth may slow in the short run, as costly investments in adaptation must be made and existing technology must be disrupted.

Yet the slow productivity growth in the United States in recent years may have positive implications for the future, he writes. Many connected activities and sectors - health care, education, industrial research, and finance - are being disrupted by the latest technologies. But once a broad range of adaptations is complete, productivity growth should accelerate, he reasons. "This is not a prediction," Eichengreen concludes, "but a suggestion to look to the range of adaptation required in response to the current wave of innovations when seeking to interpret our slow rate of productivity growth and when pondering our future."