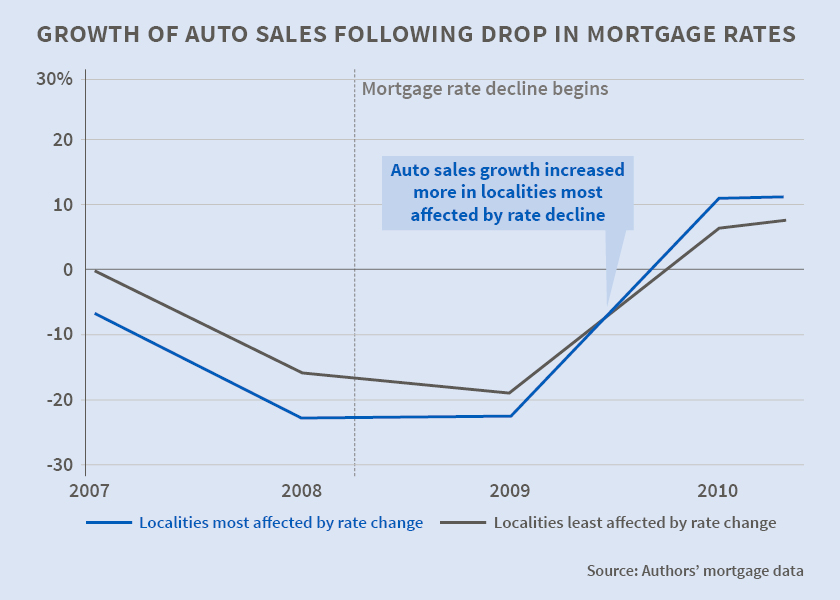 Economists have long debated the effects of monetary policy on the real economy. During the Great Recession, the Federal Reserve reduced short-term interest rates and made large purchases of mortgage-backed securities in an attempt to stimulate household spending and support the prices of assets such as houses. However, empirical evidence on the consequences of these extraordinary policy interventions is fairly limited.

The authors use a comprehensive proprietary dataset belonging to a large financial institution for their analysis. This loan-level panel data on millions of U.S. mortgage borrowers in the agency market has detailed information on loan, property, and borrower characteristics and monthly payment history on mortgage debt. All records in this data were matched to consumer credit bureau records.

The authors find that the large interest rate declines due to monetary policy changes by the Federal Reserve had a direct and substantial impact on household balance sheets and on local economies in which a substantial share of consumers were affected by the rate declines. Consumers who experienced reductions in their debt service costs due to rate declines reduced their credit card debt, were more likely to purchase new automobiles, and were less likely to be delinquent on both secured and unsecured debt. These outcomes in turn had significant impacts on foreclosures, house prices, and employment in regions with large numbers of consumers that benefited from rate reductions.

The authors suggest that policies aimed at reducing mortgage rates can have a meaningful impact on macroeconomic conditions by improving household balance sheets. By reducing the interest rates of borrowers with adjustable-rate mortgages (ARMs), low interest rate policies may achieve effects similar to mortgage modification programs. They may also take effect more quickly. Temporary payment reductions induced by ARMs may achieve outcomes similar to permanent reductions of mortgage principal, but do so in a potentially more cost-effective way. For the average ARM borrower in the authors' data sample, monthly mortgage payments declined by about $150.

By automatically reducing mortgage rates when market rates are low, ARMs can also help alleviate other frictions in the mortgage refinancing market, according to the authors. For example, rate resets allow refinancing of borrowers regardless of the extent of their housing equity or creditworthiness. They can also help to reduce frictions due to limited competition in the loan-refinance market.

Existing research provides evidence of significant inertia and inattention in mortgage refinancing decisions by borrowers. As ARM contracts do not require the active participation of borrowers in the process of rate reduction, they can help reduce the impact of these factors for mortgage refinancing.

The data indicate that a sizable part of the initial stimulus provided by lower mortgage rates may have been transferred to the banking sector through the repayment of consumer debt. Credit-constrained households, defined as those carrying significant credit card debt balances, initially allocate nearly 70 percent of the liquidity provided by lower mortgage payments to paying down their unsecured debt. This debt deleveraging process can significantly dampen the initial consumption response of these borrowers. These findings suggest that in order to stimulate household consumption government policies could also consider directly targeting the cost of servicing credit card and other higher-interest debts.