The Changing Contours of Financial Innovation 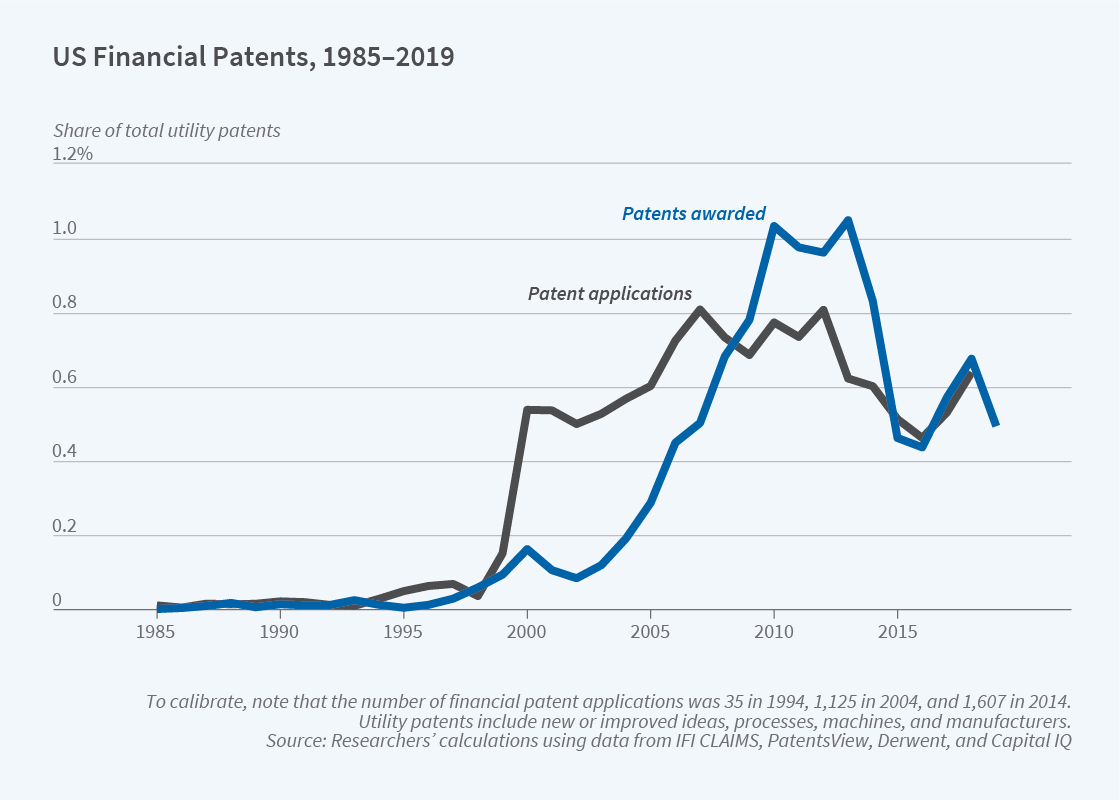 Recent financial innovations have been driven by companies outside of finance, especially by US information technology firms.

While several high-profile financial innovations, like blockchain and cryptocurrency, have attracted widespread attention, the broad landscape of financial invention — where innovation occurs, what it targets, and who is responsible for it — has not been studied systematically.

In Financial Innovation in the 21st Century: Evidence from US Patents (NBER Working Paper 28980), Josh Lerner, Amit Seru, Nick Short, and Yuan Sun address these issues by analyzing a new dataset of US financial patents awarded over the last two decades.

To determine which patents are finance-related, the researchers first identify a set of patents that are assigned to financial patent classes, and then train a natural-language processing model to recognize similar financial innovations that might be assigned elsewhere using the patent text and inventors’ names. This process allows them to analyze financial patents in a wide range of patent classes.

The researchers iden­ti­fy 24,288 financial patents that were applied for between 2000 and 2018 and awarded by February 2019. They argue that these financial patents are good proxies for financial innovation during this period. While the patentability of financial discoveries was contested for most of the twentieth century, a 1998 appellate court decision in State Street Bank & Trust Co. v. Signature Financial Group, Inc. firmly established that they were patentable. In the subsequent two decades, financial patents climbed from a negligible share to between 0.4 percent and 1.1 percent of US patent awards. Furthermore, the financial patents identified by the researchers appear to capture legitimate innovations, in the sense that they are highly cited, include all of a list of recent key financial innovations, and were subject to relatively stringent patent-review processes.

The patent data provide a revealing look at the changing map of financial innovation. Traditional financial institutions, like banks, produce a modest and declining share of patents, with the steepest drops around the financial crisis of 2008. Financial innovation has instead been driven by companies outside of finance, and especially by US information technology (IT) firms. The share of financial patents focused on banking has also declined, shifting instead towards applications in consumer finance and back-office areas like security and communications.

Shifts in the topics of financial innovation have been accompanied by changes in its geographic footprint. The New York-Newark area saw a major drop in its share of financial patents between 2000 and 2018, while the San Jose-San Francisco-Oakland and Charlotte-Concord areas saw rapid growth.

The researchers suggest that the shifts in financial innovation away from New York and away from the financial sector reflect both the push of strict financial regulation and the pull of technological opportunity. Areas with more stringent banking regulation exhibited larger drops in innovation by financial companies than by IT firms, as well as larger drops in banking-focused patents. Banks also appear to have shifted the primary location of their innovation activities to areas with lighter regulation. At the same time, states with greater technological development saw particularly strong financial patenting by IT and payment firms, and payment firms displayed some tendency to shift their innovation activities from areas with weak to areas with strong technological capacity.

Financial Innovation in the 21st Century: Evidence from U.S. Patents