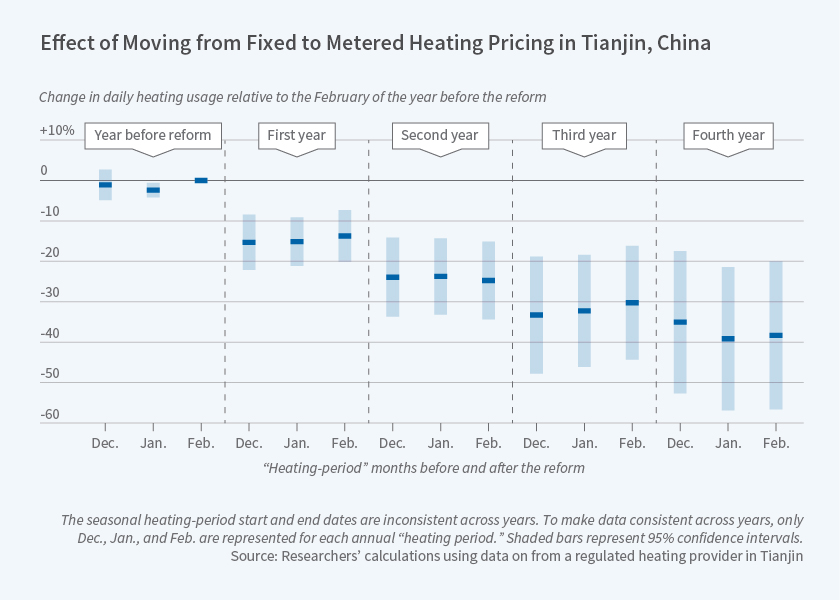 Residents of Tianjin, China, who opted to shift from flat-rate to metered, use-based heating pricing saved money and conserved heat. All residents benefited from related reductions in air pollution.

Adopting use-based pricing for household heating in developing countries can save energy, benefit consumers, and help the environment. That’s what happened in Tianjin, China, when authorities replaced a fixed-priced system of charges for heating with a metered, use-based system of charging for each housing unit. Four years after installation of the meters, heating demand was down by about a third.

Tianjin, in China’s northeast, rolled out the use-based pricing system between 2008 and 2016. Household meters were installed long before residents started paying under the new pricing system. That allowed the researchers to identify a set of 3,874 local households for which they could measure heat usage for at least a year under the old system and compare it with four years under the new system.

Under the old system, a household of 100 square meters paid $397 each winter for heat, no matter how much heat was used. Under the new system, the household paid a reduced fixed charge of $198.50 plus a variable charge based on actual usage. For example, if the annual usage was 10,000 kWh of heating, the variable charge for this household was $140, resulting in the total payment of $338.50, which implies an annual saving of about $60. Notwithstanding concerns that two-tiered pricing might confuse consumers and make it hard to realize efficiencies, the researchers find that most consumers understand the difference in pricing schemes and make beneficial choices.

By turning down the thermostat on warmer winter days, consumers saved even more. The researchers found that the average unit with the new meters used 13 percent less energy the first year, 21 percent less in the second year, 27 percent less in the third year, and 31 percent less in the fourth year. These averages include units that adopted the new pricing — 70 percent of households — and some units — 30 percent of households — that received the meters but chose to remain on the fixed-price system. Among those who adopted the new pricing system the decline in energy use was even more pronounced: 36.3 percent by the fourth year. Consumers, especially relatively poorer people, learned over time when and how much to turn down the thermostat. In contrast, richer households’ heating demand did not change much after the first-year drop.

Nevertheless, the rich saved more from the reform than the poor, because under the old system the fixed charge was proportional to households’ floor space and richer households tend to live in larger units. Under that allocation of charges, the fixed costs of low-income households were partly subsidized by better-off households.

In addition to the cost saving for consumers, there were social benefits of lowering heating demand. The researchers estimate that the welfare gains from improvements in economic efficiency and reductions in air pollution were worth an additional $61.29 per household per year, on average. Since Tianjin paid a one-time charge of $99.22 per household to install the meters, this investment was recouped in just 18 months, the researchers calculate.

The study provides direct evidence of how consumers in developing nations respond to energy pricing. That’s key, the researchers argue, because most of the world’s future emissions will come from these nations.