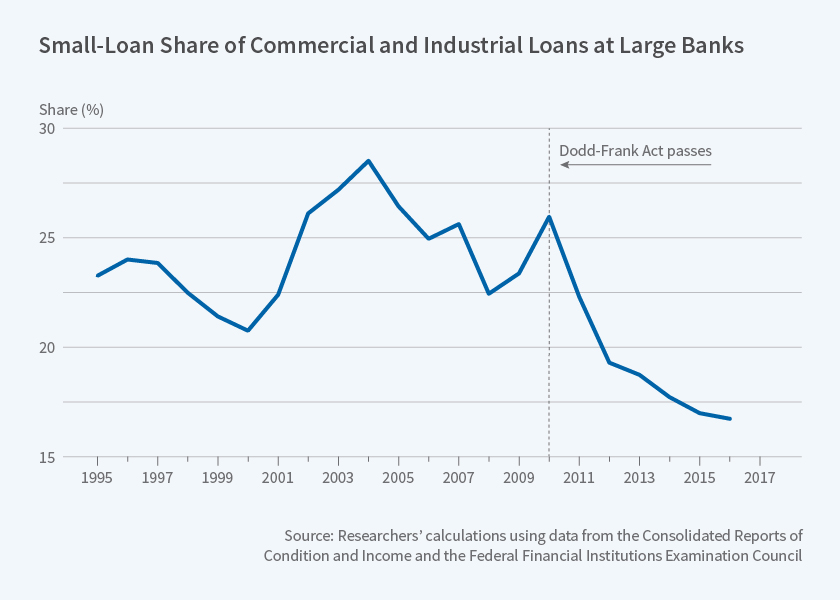 Relatively small commercial and industrial loans have fallen by 9 percent at large banks and by even more at smaller banks since 2010, when the legislation was enacted.

The Dodd–Frank Wall Street Reform and Consumer Protection Act, which was passed in the wake of the 2008 financial crisis and was designed to safeguard the banking system, appears to have made it more difficult for small businesses and entrepreneurs to obtain funding.

In The Impact of the Dodd-Frank Act on Small Business (NBER Working Paper No. 24501), Michael D. Bordo and John V. Duca find that the 2010 legislation reduced the incentives for all banks to make small loans. It also raised the benefits of scale in the banking business, tilting the playing field away from small banks which historically were a more important source of loans for small businesses than their larger-bank counterparts.

After controlling for economic conditions and other influences on lending, the researchers report that the share of commercial and industrial loans of less than $1 million at large banks — those with at least $300 million in assets — has fallen by 9 percentage points since 2010. The share of small loans at smaller banks has declined by twice as much. The real volume of small loans declined sharply in 2011, and it has grown only slowly in subsequent years, while the volume of loans of over $1 million has increased by 80 percent since 2011. This development marks a sharp break from the 1993 to 2010 period, when the value of small and large loan originations fol-lowed roughly similar trends. The researchers conclude that this divergence is due in part to new compliance regulations that have in-creased the fixed costs associated with making loans. The regulations made loans to large and established firms relatively more attractive by treating loans to small and new firms as much riskier when calculating banks' scores in stress tests.

The researchers analyze data from the Federal Reserve Board's Senior Loan Officer Opinion Survey, which includes a question about the change from the previous quarter in the credit standards for commercial and industrial loans to enterprises of different sizes. The survey responses suggest that credit standards for making commercial and industrial loans became relatively tighter for small businesses compared with medium- and large-sized firms in the period after the legislation was enacted until regulatory relief was provided to smaller banks in 2015. That relief appears to have arrested growth in the gap between small and large loans, but it has not reversed the earlier decline nor narrowed the gap.

The researchers also suggest that this legislation may have reduced the role of small banks — a traditional source of loans for small business — in the banking sector more generally. Because they are less able than larger banks to absorb the increased operating costs imposed by new regulations, small banks may have had new incentives to consolidate with larger institutions.

The study also finds that both Dodd-Frank and the earlier Sarbanes-Oxley Act unintentionally dampened small business formation, with the 2015 regulatory relief easing some of the earlier Dodd-Frank effects.

The Impact of the Dodd-Frank Act on Small Business