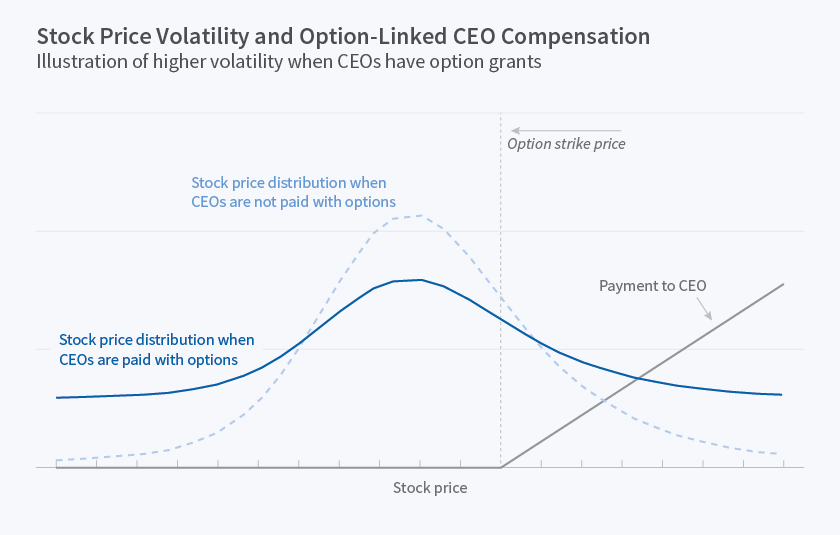 An increase in the weight of options in the CEO's compensation package is associated with an increase in stock price volatility, largely because of greater firm leverage.

Raising the share of stock options in a CEO's compensation package may lead to greater corporate risk-taking, according to a new study, How Do Quasi-Random Option Grants Affect CEO Risk-Taking? (NBER Working Paper 23091). Researchers Kelly Shue and Richard Townsend find that a 10 percent increase in the CEO's option award is associated with a 2.8 percent to 4.2 percent rise in the company's stock price volatility. Increasing corporate leverage appears to be the key channel through which CEOs raise volatility.

Increasing the fraction of a CEO's pay that takes the form of option grants might raise or lower risk-taking. Because the value of an option on a given company's stock rises with the volatility of that company's stock price, and because the value of an option cannot go below zero, option-heavy CEOs have an incentive to take more corporate risk and thereby increase price volatility. However, there is a countervailing effect: As the share of the CEO's portfolio that is exposed to the company's stock price rises, as it does when option grants rise, a risk-averse CEO might try to reduce overall portfolio volatility by lowering the volatility of the company's share price. This would entail a shift toward more conservative, less risky business strategies.

The researchers test the effect of option grants on corporate risk-taking by analyzing the structure of option award programs for the CEOs of firms included in Standard & Poor's Composite 1500 Index between 1992 and 2010. They observe that many firms have multi-year option programs, which means award grants are not likely to be driven by changing investment opportunities at the firms in the study.

There are two broad types of option-linked compensation schemes: fixed-value and fixed-number plans. Under a fixed-value plan, executives are awarded stock options with a given value during each year of the multiyear program. If the company's stock price rises between the first and second year of the grant program, thereby raising the value of each option granted, the number of options awarded in the second year would be smaller than the number in the first. In contrast, fixed-number plans award executives a set number of options in each year of the compensation program. The value of the annual awards under such a program can vary substantially as a result of movements in the company stock price and other factors. The researchers exploit the fact that in a rising stock market, as stock prices trend higher, CEOs on fixed-number plans will receive a rising fraction of their compensation in the form of options, while the value of option awards to CEOs on fixed-value plans will not rise commensurately.

The researchers conclude that, on average, "risk-taking increases when options as a fraction of total pay increase." While they note that reduced risk-taking may occur in response to "very large option grants that are awarded to risk-averse and undiversified executives," they find that for most firms in the data sample, an increase in option grants is associated with higher stock price volatility. The effects are particularly pronounced at financial and high-tech companies. The researchers explore the sources of increased stock price volatility and conclude that it is primarily due to an increase in corporate leverage — a strategy that is broadly available to CEOs and their firms.