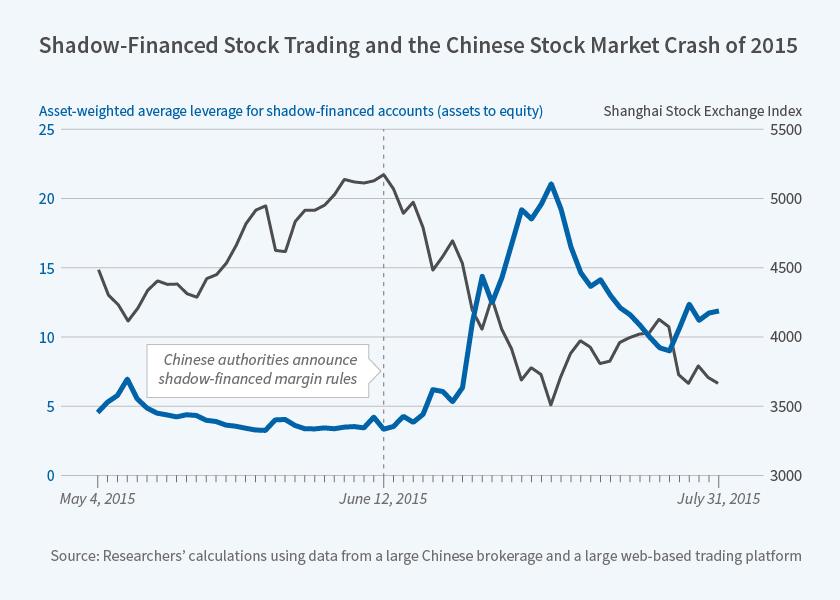 The 2015 Chinese stock market crash was precipitated by the release of draft regulations pertaining to shadow-financed margin accounts.

Leverage feedback loops in which highly levered investors facing margin calls are forced to sell off assets quickly, thus further depressing asset prices and tightening leverage constraints, are widely believed to have contributed to many past financial crises, including the U.S. stock market crash of 1929 and the global financial crisis of 2008.

In Leverage-Induced Fire Sales and Stock Market Crashes (NBER Working Paper No. 25040), Jiangze Bian, Zhiguo He, Kelly Shue, and Hao Zhou analyze the role of such feedback loops in the Chinese stock market crash of 2015.

The relationship between leverage levels and selling was particularly strong on days when stock market prices declined, consistent with a downward spiral in which investors forced to deleverage contribute to declines in asset prices, thus further tightening leverage constraints and forcing more investors to sell assets. The researchers found evidence that government regulations — particularly trading restrictions on stocks experiencing large price swings — may have exacerbated the crash. Specifically, they found that "investors seeking to deleverage significantly intensify their selling of unprotected stocks if other stocks in their portfolios cannot be sold due to stock-specific price limits."

The researchers also examined how fire sales affected the long-run asset prices of individual stocks. Stocks with high fire-sale exposure — those disproportionately held by accounts approaching their leverage limit — experienced greater selling intensity and under-performed less-exposed stocks over a period of 10 to 15 trading days. Those performance differences, however, lessened when the horizon was 30 to 40 trading days.

The researchers conclude that shadow-financed margin accounts contributed more significantly to the market crash than broker-age-financed accounts. They note that their findings may inform the design of regulatory policy for the fintech sector, since they show that "fire sales can result when new financial innovations (fintech in our case) advance ahead of regulation, much like unregulated margin trading during the U.S. stock market crash in 1929."