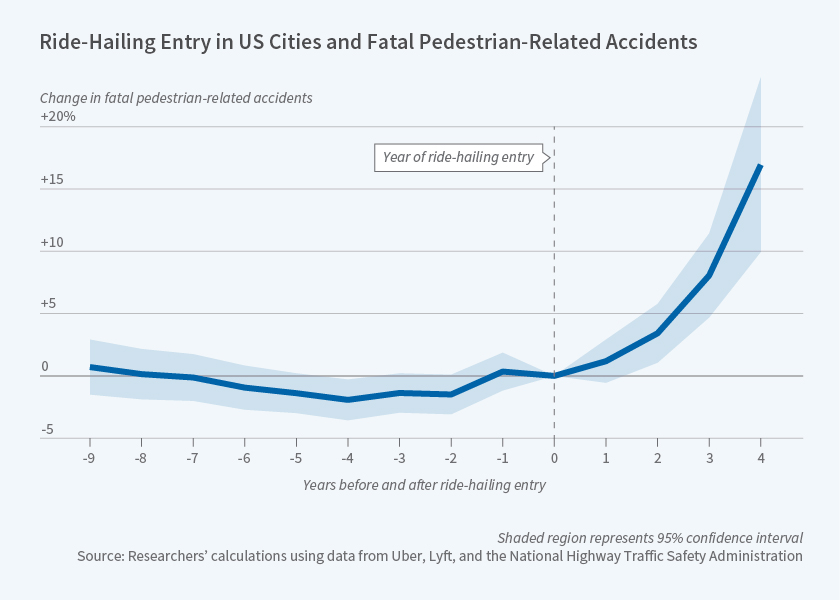 While ride-hailing services such as Uber and Lyft provide convenient transportation and flexible job opportunities, a new study suggests that these benefits may also come with a number of costs. Fatalities among automobile occupants and pedestrians, gasoline consumption, and traffic congestion have all risen since the ride-hailing services were launched in 2010, while public transportation ridership has fallen.

The Cost of Convenience: Ride Hailing and Traffic Fatalities (NBER Working Paper 26783) documents a marked increase in fatalities among both motor vehicle occupants and non-occupants — pedestrians and bike riders — after the introduction of the services, reversing a decades-long trend. When ride hailing was introduced, the United States was experiencing record-low levels of fatal traffic-related accidents, according to the National Highway Traffic Safety Administration. By analyzing the staggered introduction of ride-hailing services in major metropolitan areas, John M. Barrios, Yael Hochberg, and Hanyi Yi show that the jump in motor vehicle-related fatalities is correlated with the arrival of ride hailing, particularly in large urban areas.

The researchers tracked the number of traffic accidents and the number of motor vehicle-related fatalities between 2010 and 2016. The data do not allow identification of incidents related specifically to ride-sharing vehicles and drivers. The rise in overall fatalities is evident for occupants of all types of motor vehicles and for non-occupants, including pedestrians and bike riders. The effects are observed on all days of the week and times of the day.

Another potential explanation of this trend is the rise in smartphone usage during this time, which may have resulted in more distractions for both ride-hailing and non-ride-hailing drivers as well as for pedestrians. The researchers found that the rise in smartphone usage was positively correlated with fatalities, but that it could not explain the entire increase. Ride sharing is related to fatalities even after controlling for smartphone use in a metro area.

Ride-hailing services also seem to have increased a number of driving-related costs, including vehicle miles traveled, gasoline consumption, and traffic congestion, as measured by annual hours on the road. These increases likely are derived in part from the number of ride-hailing vehicles on the road. Drivers are subsidized by their companies to remain on the road even during lulls in demand. An increase in ride hailing was also associated with a dip in the use of public transportation in large metro areas, suggesting that some riders substitute ride-hailing services for public transportation.

The researchers caution that they are describing short-term effects that may change with time. For instance, driving quality may improve as drivers gain experience. In addition, they point out that ride-hailing services have a number of benefits that may counterbalance their costs, including providing flexible transportation options to underserved populations and offering job opportunities for workers with otherwise limited labor market options.

The Cost of Convenience: Ridehailing and Traffic Fatalities