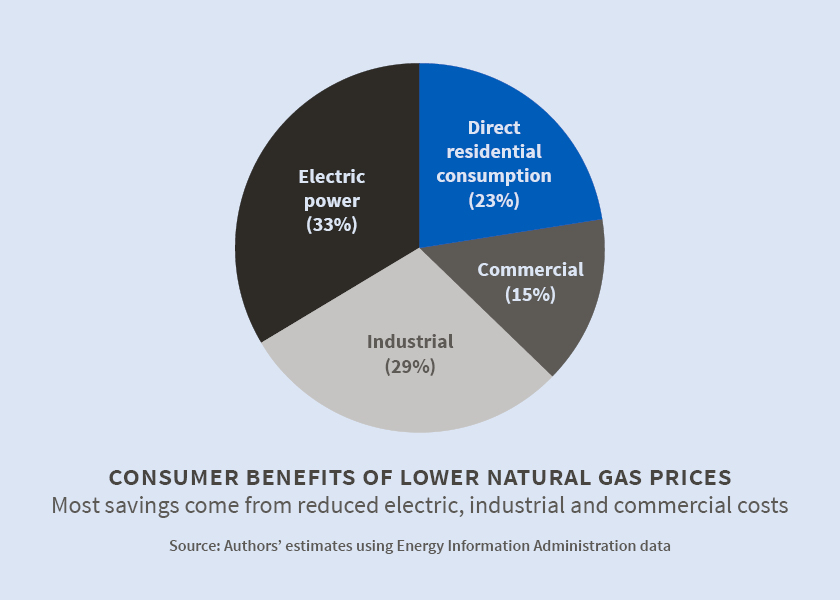 Researchers estimate that falling U.S. natural gas prices between 2007 and 2013 generated consumer benefits of $74 billion in 2013 and reduced producer welfare by $26 billion annually.

Advances in horizontal drilling and hydraulic fracturing have allowed U.S. natural gas producers to profitably extract gas from shale formations previously considered uneconomic. From 2007 to 2013, production grew by more than 25 percent, leading to a sharp drop in prices. From 2000 to 2010, the average price of natural gas in the United States was $6.81 per thousand cubic feet in 2013 dollars. Since 2011, it has averaged $3.65 per thousand cubic feet.

In Welfare and Distributional Implications of Shale Gas (NBER Working Paper No. 21115), Catherine Hausman and Ryan Kellogg use new estimates of natural gas supply and demand elasticities to estimate the broad welfare and distributional effects of the natural gas supply boom. They find that it generated net economic benefits, not including environmental impacts, of $48 billion in 2013, which consists of a gain of $74 billion per year in consumer surplus benefits and a reduction of $26 billion per year in producer surplus benefits. As prices fall, this "consumer surplus" rises. A similar effect operates in the reverse direction for producers, though it is counteracted by the supply expansion itself. Some producers are able to extract natural gas for less than the prevailing market price, and they receive "producer surplus" as a result. When prices fall, the magnitude of this surplus declines. Natural gas producers with wells that were operating before the shale gas boom received lower revenues from their existing wells; therefore, states with large volumes of conventional natural gas production experienced declines in annual benefits to producers. Meanwhile, states such as Arkansas and Pennsylvania that experienced large increases in new shale production but had little conventional production saw increases in producer benefits.

Residents of the West South Central region—Arkansas, Louisiana, Oklahoma, and Texas—benefited most from the price decline because their industrial and electric power sectors use large amounts of natural gas. The estimated benefit in the region was $432 per person per year. Benefits in New England were $190 per person per year.

The results also suggest that low-cost natural gas stimulated manufacturing activity. The authors use data from the 2002, 2007, and 2012 Economic Censuses to compare the pre-boom period, 2002 to 2007, with the boom period, 2007 to 2012. They compare industries above and below the 90th percentile in their intensity of natural gas use, labeling the first group "highly dependent" on natural gas and the second group "less dependent." They find that industries that are highly dependent on natural gas contracted less during the post-2008 economic downturn, and increased rather than decreased employees' compensation, arguably—though not conclusively—as a result of the favorable shock to natural gas prices that coincided with the economy-wide recession.