Oil Prices and Production: A Remodeling 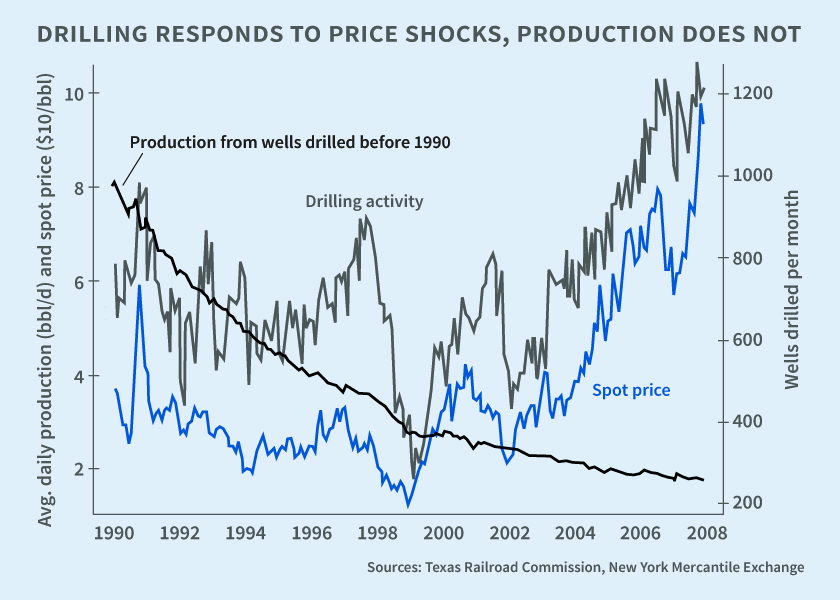 The maximum pace of extraction is constrained by pressure inside the well and does not react to price changes.

Since Harold Hotelling developed his classic model of exhaustible resource extraction in 1931, economists have modeled the optimal extraction of a fixed stock of an exhaustible resource under the assumption that resource owners can reallocate extraction across different periods without constraint. In Hotelling Under Pressure (NBER Working Paper No. 20280), Soren T. Anderson, Ryan Kellogg, and Stephen W. Salant argue that observed patterns of oil production and prices cannot be replicated using the Hotelling model or existing modifications. Instead, the authors develop a model in which the decision to drill a well in a new area is unconstrained, and reacts sharply to price changes, while the subsequent maximum pace of extraction is constrained by pressure inside the well. A drilling investment problem in which the maximal flow of oil is constrained at the well level provides a better fit for the actual cost structure of the oil industry.

Using data from Texas over 1990-2007, the authors find that the rate of production from existing wells is initially high but declines rapidly, and does not respond to shocks in spot or expected future oil prices. This behavior is inconsistent with most extraction models. But it can be explained by the fact that the pace of extraction is dictated by the pressure level of the well. When a well is newly drilled, the pressure in the underground oil reservoir is high and allows for rapid production. Over time, pressure declines toward zero as the reserves are depleted. Firms do respond to oil prices, but they do so by adjusting at the extensive margin: the drilling of new oil wells.

Therefore, the authors present oil extraction as a drilling problem in which firms maximize discounted wealth by choosing when to drill their wells, but the maximum flow from these wells is constrained by pressure. The model explains that extraction at the flow constraint can be optimal even in episodes like 1998-99 when spot prices were very low and oil futures markets implied that prices were expected to rise faster than the interest rate. A well owner who attempts to arbitrage such prices by producing below the constraint cannot recover all the deferred production at the instant prices reach their maximum in present value because production is limited by pressure levels. Instead, deferred production can only be recovered gradually over the lifetime of the well, which may include periods when the discounted oil price is lower than the current price. Consequently, aggregate production is price inelastic. It will evolve gradually over time, following changes in the drilling rate, and will only respond to shocks with a significant lag.

The model's equilibrium dynamics also replicate other salient features of the crude oil extraction industry. Drilling activity and rental rates on drilling rigs strongly co-vary with oil prices. Production in newly developed oil-producing regions starts low but then peaks and eventually declines as extraction slows as the number of untapped wells diminishes. Positive global demand shocks lead to an immediate increase in oil prices, drilling activity, and rig rental prices; and oil prices may subsequently be expected to fall if the increased rate of drilling causes production to increase.