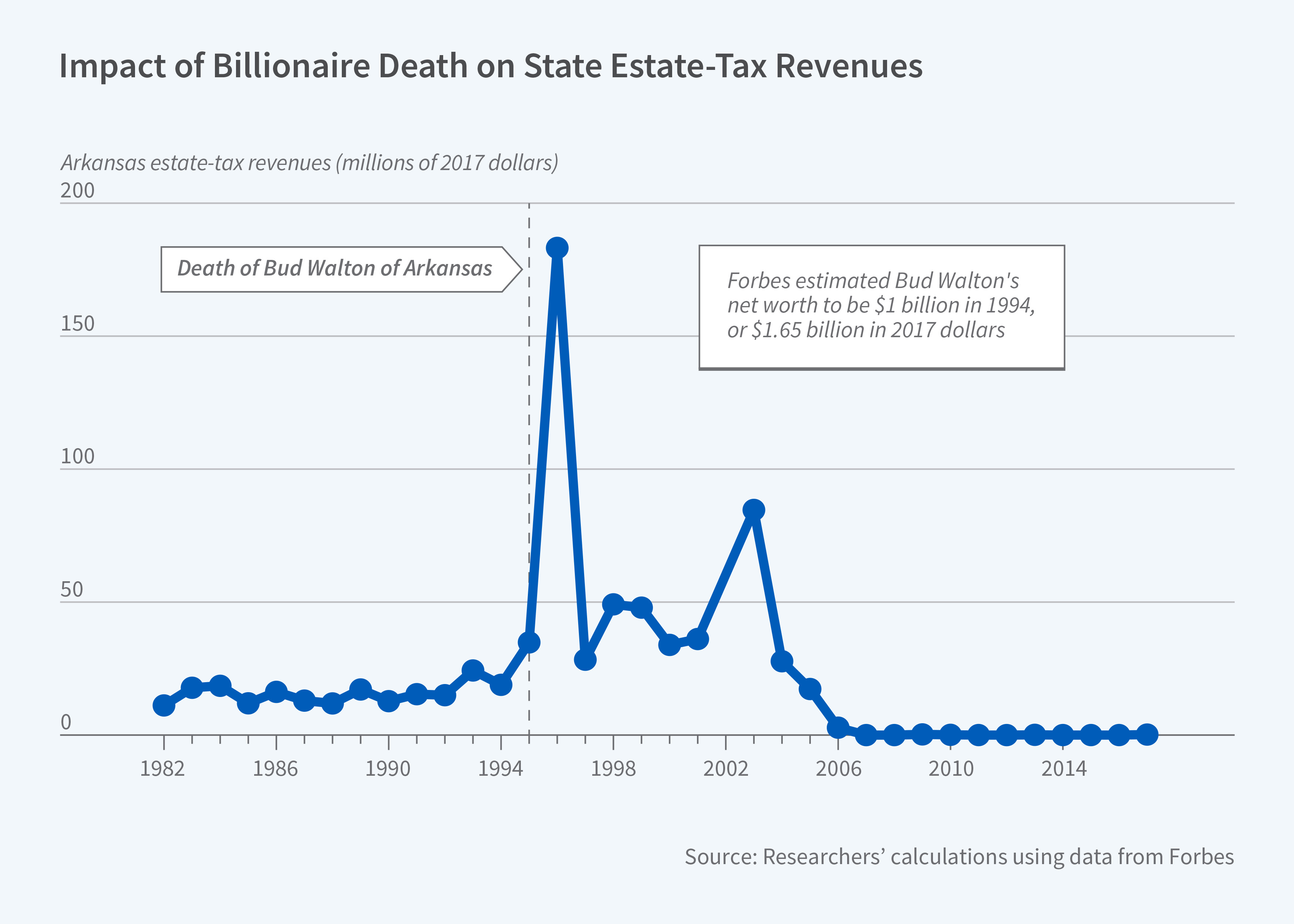 While death and some taxes may be certain, US state-level estate taxes can be avoided by moving to one of the 36 states that do not collect them. Some very wealthy individuals do just that. In Taxing Billionaires: Estate Taxes and the Geographical Location of the Ultra-Wealthy (NBER Working Paper 26387), Enrico Moretti and Daniel J. Wilson attempt to quantify how state estate taxes affect the residential choices of the very rich, and to estimate whether, when states increase their estate tax rates, the increased revenues collected from those who remain in the state exceed the revenues lost as some well-to-do citizens move away. They use data from the Forbes 400 list of the richest Americans to study the location choices of the very rich.

After 2001, taxpayers became fully liable for state estate taxes. These taxes can be substantial: the researchers estimate that the average state with an estate tax collects $165 million in incremental revenue in the three years following the death of a Forbes 400 member who lived in the state.

From 2001 to 2017, the number of individuals in the Forbes 400 who lived in states that levied estate taxes fell by 35 percent. Between 2001 and 2010, 21.4 percent of the 376 people on the Forbes list for whom residence and age were available in 2001 moved from a state with an estate tax to one without one. Only 1.2 percent of those living in a state without an estate tax moved to a state with one. The authors estimate that as a result of cross-state moves, $80.7 billion in wealth was no longer subject to state estate taxes by 2010.

When designing tax policy, states face a trade-off between the one-time revenue gain from levying an estate tax on taxpayers who die and the ongoing revenue loss of foregone income tax revenues when high net worth taxpayers leave the state to prospectively avoid estate taxes. Using the very common state estate tax rate of 16 percent and assuming that high net worth taxpayers generally are as mobile across states as the Forbes 400 group, the researchers estimate that the revenues collected from existing state estate taxes exceed the present discounted value of the lost income tax revenues in all states except those with the highest personal income tax rates, notably Hawaii, Minnesota, Oregon, and Vermont. They also calculate that among states without current estate tax, imposing one would lose more revenue than it would raise in California, Idaho, Nebraska, and New Jersey. If high net worth taxpayers are only half as mobile as the billionaires studied, every state would collect more from state estate taxes than movers would cost it in lost income taxes.

Taxing Billionaires: Estate Taxes and the Geographical Location of the Ultra-Wealthy