Regulatory Changes, Private Equity Markets, and the Decline of IPOs 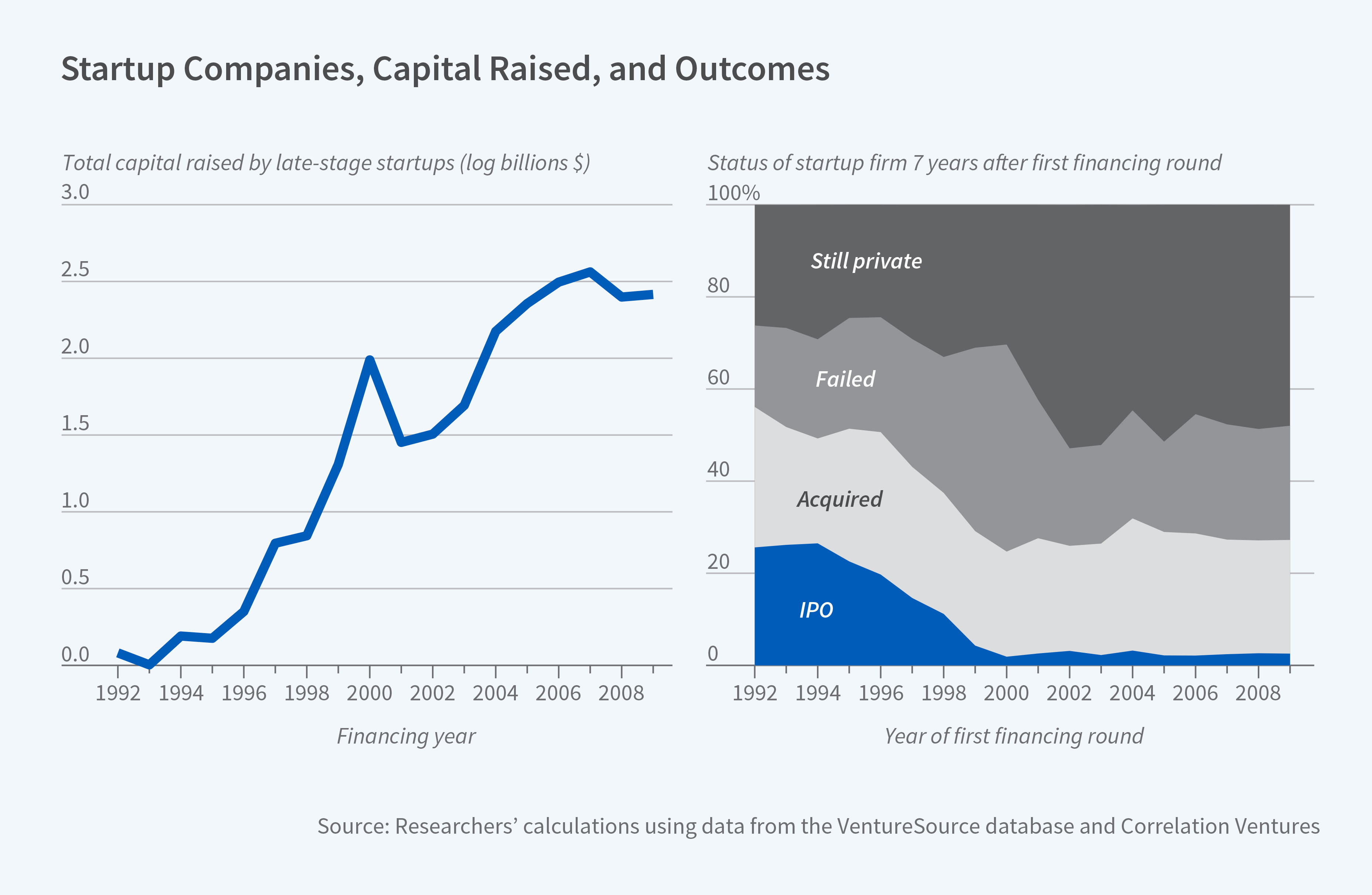 The National Securities Markets Improvement Act (NSMIA), passed in 1996, has facilitated startups’ access to out-of-state private capital by exempting eligible private issuers from complying with the different state securities regulations — known as blue sky laws — in the various states in which their investors are located. By amending the Investment Company Act of 1940 registration requirements, the new law has also made it easier for private funds investing in startups to raise large amounts of capital. Prior to NSMIA, venture capital (VC) and private equity (PE) funds could raise capital from no more than 100 investors if they wanted to avoid having to register as public investment companies and be regulated like mutual funds. NSMIA has made it possible for such funds to raise capital from an unlimited number of investors and still avoid registration if all their investors are “qualified purchasers” — individuals owning at least $5 million in investments or institutions owning at least $25 million.

In The Deregulation of the Private Equity Markets and the Decline in IPOs (NBER Working Paper 26317), Michael Ewens and Joan Farre-Mensa suggest that NSMIA-induced changes in regulation have played a significant role in changing the going-public versus staying-private trade-off, helping bring about a new equilibrium in which fewer startups go public and those that do go public are older. Their sample includes all US-based startups listed in the VentureSource venture capital database that raised their first round of private funding between 1992 and 2016. Although VC-backed firms make up less than 1 percent of all privately held firms in the United States, from 1990 to 2016 they accounted for an estimated 42 percent of all US IPOs.

The study finds that NSMIA has increased the ability of late-stage startups — traditional IPO candidates — to raise large sums of private capital, including from out-of-state investors, and enabled VC and PE firms investing in mature startups to raise larger funds. The effects have been strongest in states that had not voluntarily coordinated their blue sky laws prior to the passage of NSMIA. As markets have adapted to the post-NSMIA regulatory environment, the supply of private capital has expanded. In 1995, private startups that were at least four years old raised $1.3 billion. In 2015 they raised $33 billion, with over three-quarters of this capital coming from non-traditional startup investors such as private equity funds, mutual funds, and hedge funds.

The researchers show that the fraction of VC-backed startups that were still private 10 years after their first financing more than doubled from 11 percent for those that raised their first round in 1992 to 26 percent for those that did so in 2006. At the same time, IPO rates have fallen dramatically. Of companies first financed in 1994, 26 percent went public through an IPO; for those first financed in 2000 or later, the IPO rate has been between 2 and 3 percent. Those firms that still go public tend to be older, with the median number of years from first VC financing to IPO increasing from about four years to seven years over the sample period. The researchers find that startups whose founders hold a higher equity share are more likely to remain private longer. They point out that there is a tension between the interests of the founders, who prefer to avoid the loss of control and additional regulatory burden associated with going public, and the interests of VC investors, who seek an IPO or acquisition as a way of cashing out of their early-stage investments.

The researchers point out that the influx of private capital has potentially reduced retail investors’ access to some of the fastest growing US companies. An increasing number of “the largest and most successful firms in the US economy are private. They are not subject to public disclosure requirements, and are not in the portfolios of ordinary stock-market investors, including those invested in index funds.”