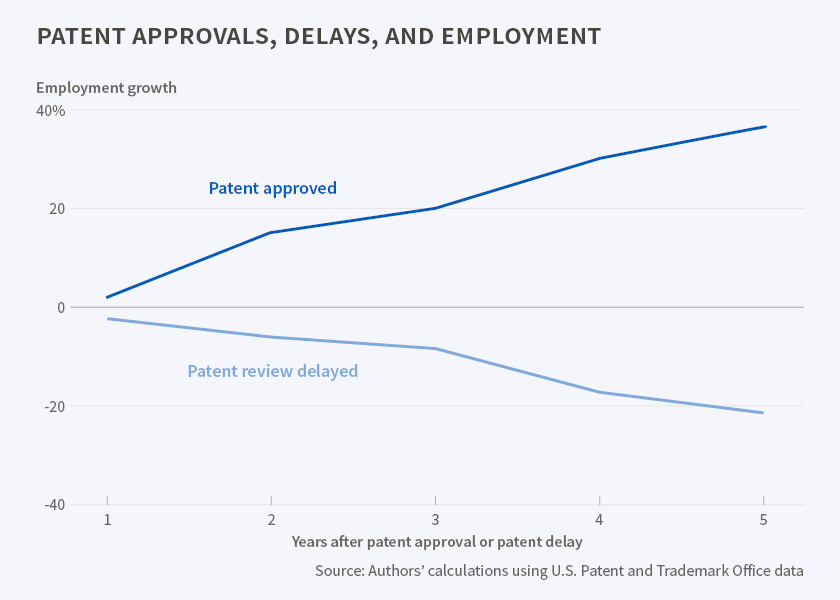 Approval of a startup's first patent application is associated with higher growth in sales and employment, more innovation, and a greater likelihood of going public.

Prompt patent approvals are associated with greater job and sales growth and higher investor returns at startup firms, Joan Farre-Mensa, Deepak Hegde, and Alexander Ljungqvist find in The Bright Side of Patents (NBER Working Paper No. 21959). Delays in approval substantially hurt a startup's growth prospects, and reduce not just jobs and sales growth but also follow-on innovation and the probability of going public or being bought.

The researchers analyze newly released data on patent applications approved or rejected by the U.S. Patent and Trademark Office. Studying 45,817 first-time patent applications filed by U.S. startups since 2001, they find that approval of a first patent is associated with a 36 percentage-point increase in a firm's employment growth and a 51 percentage-point increase in sales over the following five years. The firm's ability to innovate also improves. Startups whose applications are approved receive 49 percent more subsequent patents and 26 percent more citations per patent. Patent approval more than doubles the probability that a startup subsequently goes public. These estimates are derived from a comparison of firms whose patent applications are either randomly rejected or randomly accepted, in the sense that the applications are randomly assigned to a patent examiner who may be either intrinsically harsh or intrinsically lenient.

Delays in approving applications can have a similarly adverse effect on startups as outright rejection. The study finds that every year of delay in reviewing an eventually successful application, caused by administrative factors not related to the quality or complexity of the application, reduces a firm's employment and sales growth over the five years following approval by 21 to 28 percentage points. Such a delay is also associated with a 13 percent reduction in the number of subsequent patents, a seven percent decline in the number of citations per patent, and as much as a 50 percent drop in the probability that the patenting firm goes public. On average, a two-year delay in approval has the same negative impact on a startup's growth and success as outright rejection of the patent application.

"Patent review delays can significantly hamper the success of innovative startups by adversely affecting their ability to raise the capital necessary for their growth," the researchers conclude. "These novel findings highlight the importance of a quick patent review process, particularly in fast-moving industries, to resolve uncertainty surrounding applicants' property rights and their ability to produce patentable innovations."

One reason a patent is good for business is that winning one boosts a startup's probability of attracting venture capital by 53 percent. The startups most likely to benefit from patent approval are those that had raised little or no previous funding, were founded by inexperienced entrepreneurs, were based in areas less likely to attract investors' attention, and were in an information technology business.

The Bright Side of Patents